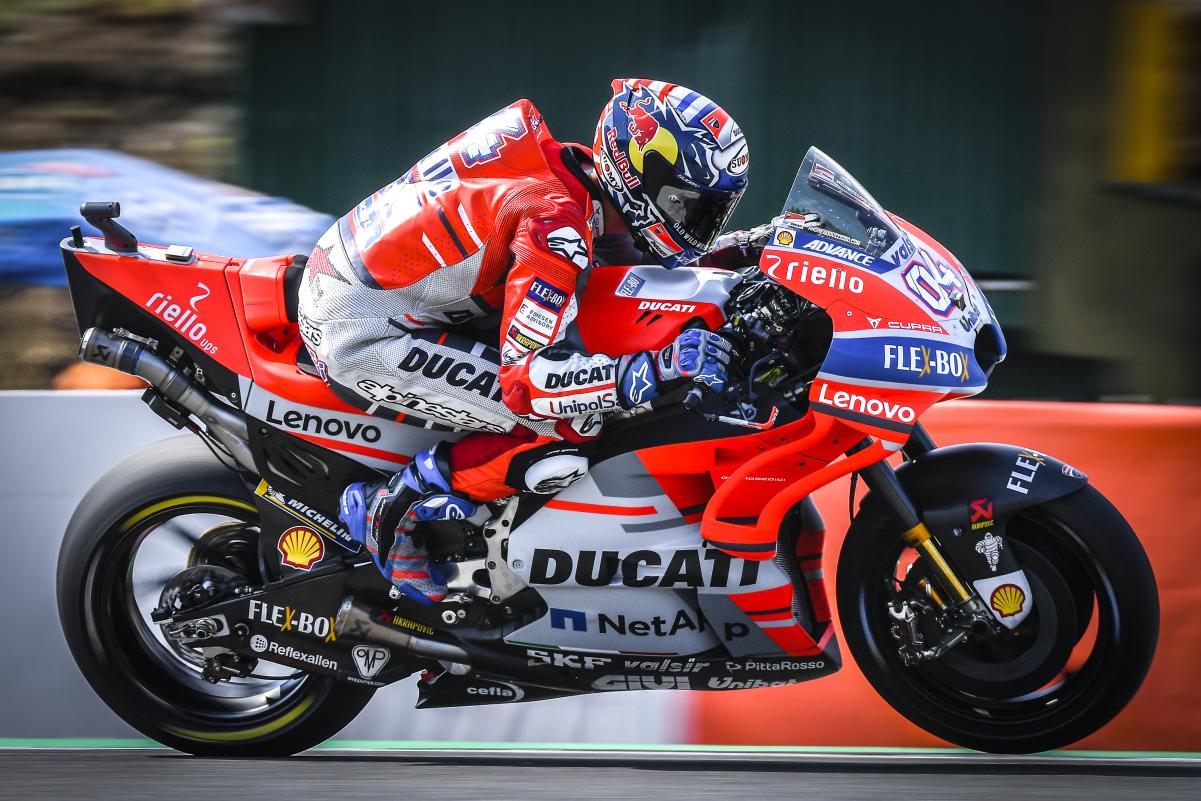 Andrea Dovizioso controlled the pace, the tyres and also the attacks from rivals to finally win in Czech Republic GP at Brno, leading a Ducati 1-2 with Jorge Lorenzo in second.

Dovizioso kept the lead resisting Yamaha’s Valentino Rossi in the opening sequence. The Italian bid his time behind Dovizioso and with 14 laps remaining, he finally got the move done to lead the race.

However, it wasn’t for long that Rossi could stay ahead as Dovizioso was quick to pounce on the Yamaha rider and retake the lead. For Rossi, it wasn’t the loss of the lead but he started to tumble down the order.

He was first cleared by Honda’s Marc Marquez and then was passed by LCR Honda’s Cal Crutchlow for third. At the front though, Dovizioso and Marquez started to build on a gap with the rest of the field until Ducati’s Jorge Lorenzo caught up.

The Spanish rider passed Rossi for fourth and made a quick work of Crutchlow for third to slot himself behind the Top 2. The trio then had an intense battle until the chequered flag. Lorenzo tried to take the lead by passing Marquez and Dovizioso at the same time.

But he went wide and allowed Dovizioso back in the lead. Lorenzo kept trying to overtake his teammate but Dovizioso had it under the control. In the mean time, Marquez was lurking behind the two Ducati riders.

Marquez found his way through Lorenzo, but the latter rebounded in the next corner to retake second place. Unfortunately, it was not enough to prevent Dovizioso to take the win and lead a Ducati 1-2 as Lorenzo held off Marquez in the end.

Outside the podium places, Rossi beat Crutchlow in a photo-finish finish on the line for fourth. Pramac Ducati’s Danilo Petrucci was sixth as the Italian faded away in the latter stages of the race after a strong start.

Tech 3 Yamaha’s Johann Zarco did well in seventh ahead of Honda’s Dani Pedrosa and Angel Bieto Ducati’s Alvaro Bautista – the latter close to clearing Pedrosa but fell short by 0.096s in the end.

Tech 3 Yamaha’s Hafizh Syarhin and Aprilia’s Alexis Espargaro completed the Top 15. In the riders’ standings, Marquez maintains the lead over Rossi by 49 points as Andrea Dovizioso is now third, 68 behind Marquez. Vinales dropped to fourth.