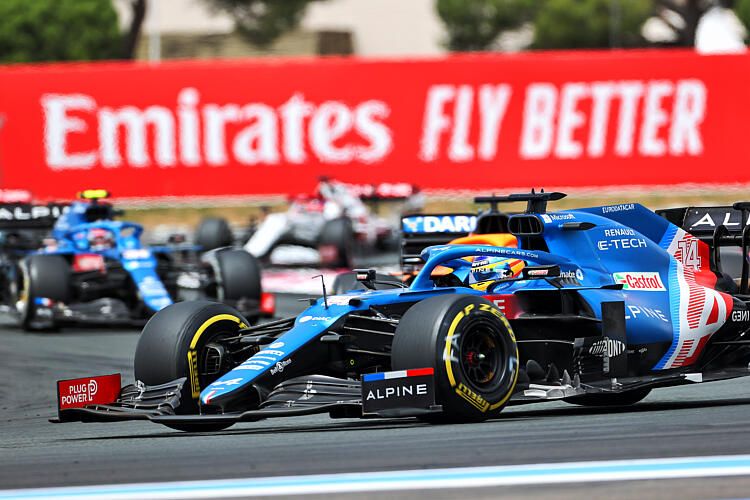 Alpine had to change their swap idea in F1 French GP after Fernando Alonso talked them through it, while he was ahead of teammate Esteban Ocon.

Post-race, an interesting passage of happenings emerged from F1 French GP regarding the Alpine drivers. Alonso was on a standard strategy of one-stop and having started within the Top 10, he began the race on mediums and would be switching to hard tyres. Ocon, meanwhile, started outside the Top 10 had a free tyre choice.

As discussed before the race where they predicted that the two will come together on track at some point, which happened around the time for the first stop. When Ocon came on the back of Alonso, he was instructed to let him through during the first stint.

Alonso noted that he was struggling with “very bad” graining on his medium tyres, as others around him. He dropped to 11th after losing to McLaren and was just ahead of Ocon, who had to defend from the Aston Martin of Lance Stroll.

At that moment, both Alpine drivers received an instruction to swap cars around and were ready to do so, but it didn’t happen on Lap 17 when it was first discussed to happen. Ocon was asked to keep Stroll behind, while Alonso was noted to be ready for the swap.

Although Ocon had the use of DRS, he was still a fraction over half a second behind Alonso on the run to the chicane on that lap and was not let past. That’s when the Spaniard came on radio to say that it is better for him to stop on his worn tyres than lose time on swap.

“Basically, I would prefer to stop. If you want, I do it in turn one, but I will lose 2 or 3 seconds. Maybe it is better to stop,” said Alonso, as the team then took a moment to decide, where there was no swap on Lap 18 as well.

Eventually, Alonso was called into the pits to change to hard tyres, which gave Ocon a clear air to push, with no time lost in the swap too as the Spaniard suggested. It was interesting display of experience and also adaption from the team’s side, without hurting anyone.

Alonso was advised by his race engineer which was a specific instruction. He saw it differently and advised them of his finding. As Stroll was being followed closely by Ocon, the Alpine drivers could have lost time in undertaking the swap.

With the tyres degrading faster, Alonso had to stop at some stage. The team then duly saw this and advised them that they would not be swapping card around. In some ways, it could be deemed selfish by the Spaniard as he did not adhere to the instruction.

But from Alonso’s side, he put forward an idea and the engineers agreed after seeing the data. It was something different at Mercedes, where Valtteri Bottas was extremely irate with his own crew over wanting to switch to a two-stop strategy and not doing so.

Post-race, Alonso admitted of the discussion pre-race but noted that it was best for him to pit, even though, it was perhaps two laps too early for him to change tyres. “We talked about this that at some point we will meet in the race, because we started with different tyres,” he said to written media.

“But we were stopping either on that lap or the next lap. So while Esteban was fighting with the Aston Martin, maybe it was not the best moment. We stopped on the following lap and I think it was the best decision to give him free air. Ideally, without Esteban behind I could have stopped a few laps later, but obviously, we didn’t want to hold him up,” summed up Alonso, who eventually ended up eighth after late fight back.

Meanwhile, Ocon was fine at that time as there was nothing that could have been done at that time, but added that they will have to discuss about it further. “At the time we were on a different strategy,” he said. I was slightly faster than Fernando because I was on the harder compound and had a bit less degradation than him. We need to review what we could have done better overall in that situation, but I don’t think it would have changed much in both of our races to be fair.”