Home Rally Dakar Alonso unlikely to do Dakar in 2021 as he eyes bigger challenge... 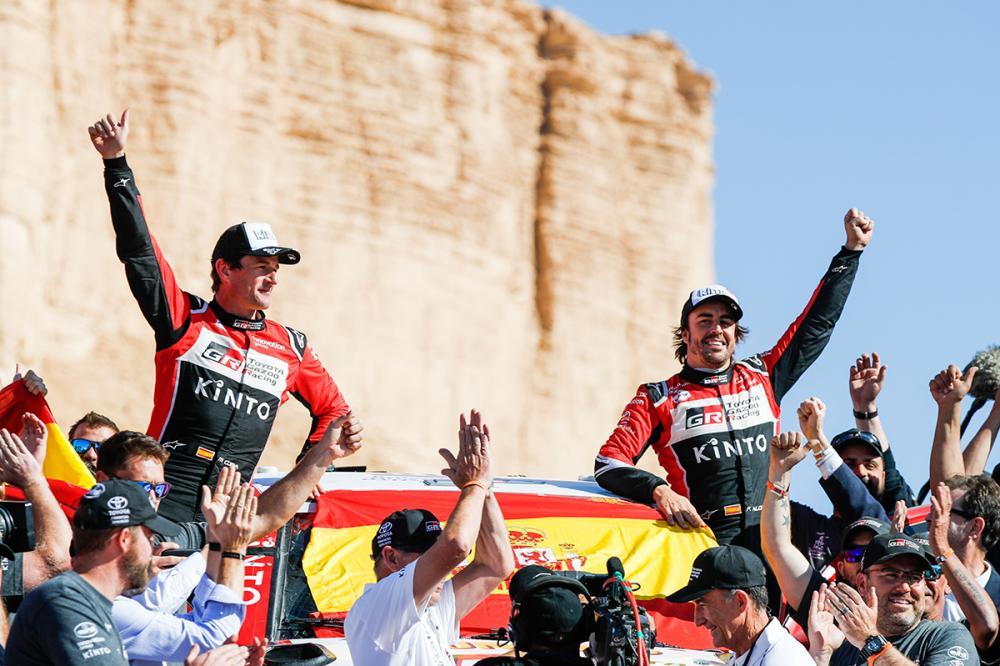 Fernando Alonso says he is unlikely to do compete in Dakar Rally in 2021 as he has eyes on bigger challenges for his future, whether F1 of endurance racing or IndyCar.

Amid huge speculations regarding Alonso returning to F1 with Renault after the departure of Daniel Ricciardo to McLaren from 2021 onward, the Spaniard has more or less confirmed that he won’t be returning to compete in Dakar at least in January.

Alonso did well in his first Dakar run with Toyota but he reckons it is time to get back into bigger challenges and maybe return to the cross-country rally scene later on. He is scheduled to compete in Indy500 on August 23 with Arrow McLaren SP.

That’s the only racing programme he has and in a recent chat on Real Madrid TV, Alonso hinted on his future which will get him back to F1 and or FIA World Endurance Championship or even IndyCar for that matter if the former two doesn’t works out.

“I am considering different challenges, contemplating various options,” said Alonso. “Let’s say that since the end of 2019, when I decided to participate in the Dakar adventure to learn about a discipline very different from what my career had been up to there, I have dedicated many thoughts to the future.

“The Dakar was a bet, I wanted to see how it went and it was a very positive experience that I will definitely repeat in the future. But not in the next 2-3-4 years: on a physical and motivational level I feel I am prepared for very, very big challenges and for this reason I believe that there will be room for the Dakar again later.

“Now I want to focus on the top category in the world of engines, so either a return to F1 or another experience in the World Endurance or IndyCar. I have an idea in my head. I have seen that my name appears with some frequency in the newspapers and in the news. But in reality there is nothing new, I have no big news to communicate.

“As I said before I can only say that I am at the highest physical and mental level and consequently I again want important challenges. 2019, my first year without F1, was very intense, I did everything. As a result I had imagined a peaceful 2020, of rest.

“It had to be just for me and in reality it has become very quiet for everyone since nobody runs for the pandemic, the activity is stopped. I will do the Indy500 and then I will continue to recharge batteries in view of 2021,” summed up Alonso.

The Spaniard noted about an idea but also added that he doesn’t have any news for the time being despite the huge reports of him already having a deal with Renault in F1. His manager and friend Flavio Briatore feels the same as he added on Ferrari changes too.

“Alonso is motivated,” he said in an interview to Gazzetta. “A year out of Formula 1 has done him good. He has detoxed himself and I see him more serene and ready to return. Regarding Ferrari situation, in F1 it has always been about having the winning recipe.

“You must have one driver who is focused on the world championship and the other who collects big points, snatching them from rivals. Vettel paid for the fact that a very fast boy arrived at the team. It surprised him and the team, as happened at McLaren with Hamilton.

“Two drivers at the same level in a team eventually risk taking points off each other.” Adding more on Alonso situation in 2021 F1 season, McLaren’s Zak Brown also felt that it will be no-brainer for Renault to sign him up in a situation like this.

Alonso has won titles with the Enstone-based F1 team when it were Benetton. “I spoke with him the other day and I was kinda poking around,” said Brown to Sky Sports. “I think he’s undecided, and if I was running Renault, that’s who I’d put in the car: big name, fast as anyone, won two championships with them, so he’s got history.

“So, from a Renault perspective I think he’s a bit of a no-brainer to put in. But the question is whether Fernando wants to get back to 22 races with a car that doesn’t look like it’s capable of winning yet? Given Fernando’s stature, what would get him to jump at a seat is if he thinks he can be at the top of the podium.

“Given that Renault are at the similar journey back to the front, and I think they’ll get there – they’re a great team, great resources, great company they’ve been there, done that before. I don’t know if Fernando has the appetite to go on a three-year journey versus getting in a car in which he can win in, in 2021,” concluded Brown.

At the moment, Renault are not short on names as they have Alonso on top but Sebastian Vettel has also been linked, while their own junior driver Guanyu Zhou could also be in the mix. Having had Sergey Sirotkin last year, he may well be on the list too.

Here’s what Zak Brown spoke after the huge driver changes at McLaren, Ferrari