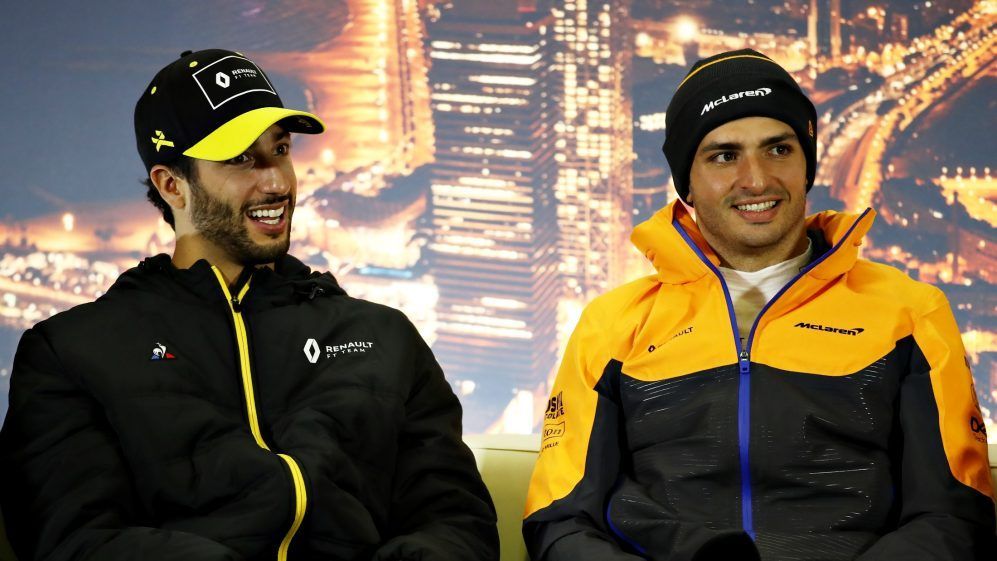 McLaren Racing’s Zak Brown has detailed on the hiring of Daniel Ricciardo from F1 2021 onward plus explained open talks with Carlos Sainz and why Sebastian Vettel was never on the list.

After the storm in the past few days involving Ferrari, McLaren, Renault, Vettel, Sainz and Ricciardo, things have settled down for now, where the team heads can look back at their decisions, which will make their future beyond the 2020 F1 season.

After reading about Mattia Binotto’s comments, we now have McLaren’s Brown, who featured on Sky Sports F1 and spoke at length, where he revealed lots of secrets and gave a tentative look at how long these conversations were on from.

We have divided the story into three sections, where we will first begin with Ricciardo. Brown spoke about how he never left touch with the Australian and that he was always the second option if Sainz was to leave McLaren after the 2020 F1 season.

Brown: “We are very excited. We went after Daniel a couple of years ago and I think narrowly missed out. So we’ve been a fan of Daniel’s for some time. Obviously he went to Renault and we brought in Carlos and Lando who have done a fantastic job. But as things turned we are amid a weird season which hasn’t started and we were out of contract with Carlos and he had some opportunities. We’re going to miss Carlos, he’s done a fantastic job but now we have a seven-time Grand Prix winner in the car and we couldn’t be more excited about the new season with the most exciting line-up.

“I’ve come to learn in F1 don’t expect anything except for the unexpected. We had a sense, we started talking to Carlos in the off-season about his future with us and whether he wanted to drive for McLaren or Ferrari. We could understand what he would and we stayed closed with Daniel ever since he left Red Bull and we know how he could do in a race car. We’ve got a very strong, open relationship with Carlos, his management and his father. This didn’t come as a surprise given how quickly we announced Daniel, and how quickly Carlos announced what he was doing. We were very joined up through this entire process.

“Whats being reported [about the finances of the contract with Ricciardo] is not accurate but he is a very well paid driver and I think he is worth it and in the right car, he is capable of winning a championship immediately, he is extremely marketable from a commercial stand point, I think he is a very exciting driver and a combination of he and Lando will be awesome, a fan favourite on and off track.”

The interesting aspect of Brown was that he knew Sainz was talking with Ferrari, which shows that the Italian manufacturer always had a back-up in mind with the Spaniard, if Vettel was to decide otherwise – and this goes back to 2019, rather than early 2020.

On Sainz eventual move, his maturity:

Brown: “We did get a wind of it [the movement], as Carlos and I did spoke about it, so it was not like out of the blue. To the point that how majority of the driver movements happen, whether sneaking around the back of motorhome or secret dates, but fortunately we had a good relation with Carlos, Lando and even Fernando, we allowed him to go Indy for that one season while still under contract and also race in Le Mans, so I think McLaren has a different philosophy in terms of relationship with different people.

“There was a conversation which Carlos had with Andeas and I over the winter, so we actually even gave him permission to speak with Ferrari, so it was all very above board and to see us part way eventually after we race together this year, he also did a video which we didn’t know about, it was all his doing.

“So, I think, there was real affection for Sainz at McLaren and always will be and I think it is great to see that drivers and teams can separate and there will not be animosity because I think if you see some of the other movements, looks like unfortunately, there is some bad blood but will need to still race together [ – hinting at Renault/Ricciardo -], so we are proud of how we handle it.

“Carlos did a better job than I thought he would do, obviously, we wouldn’t have signed him if we didn’t think he would do a good job. He didn’t really made any mistakes and if we look back at Toro Rosso, I remember a silly incident in Bahrain, coming out the pits, so we didn’t see any of this kind of rookie errors which you kind of expect.

“He showed real maturity and lot of pace. He had quite a poor start to the season, getting caught out in qualifying and didn’t really score points in first couple of races, then worked really well with Lando and he is really fast, definitely a team player. I think he will do well in Ferrari, give Leclerc, a run for his money.”

Another important point noted by Brown was about not having had any conversations with McLaren, whereas some reports suggested that talks did take place. The American saw the move from the German, especially how the relationship started to come down.

On no Vettel talks, troubles inside Ferrari, retirement:

“Clearly it’s not a nice environment inside the Ferrari garage at the moment with the drivers and management, it seems to not be a happy family at the moment. Which I think is going to make for some pretty exciting racing in 2020 because I think we saw in Brazil the fireworks that were inevitable and building up, I’m anticipating more of that this year.

“It really depends, if Seb looks around, it doesn’t look like there’s a Mercedes or Red Bull opportunity for him, there’s not a McLaren opportunity for him, clearly not at Ferrari, so the next best is Renault. And the next question is does Seb want to go with a team that is probably not going to win in 2021? It’s a great team and they too should be moving up the grid but I think unless Seb wants to restart a journey with a team that’s back on a journey – then I think he’ll end up probably leaving the sport unfortunately.”

On McLaren’s road to recovery, challenge for Norris, no COVID disruptions:

Brown: “We have been on this road to recovery and we made a big step forward last year, with that we had best of everything in relatively short period of time like the addition of Andreas Seidl, who has been great for us and James Key has started, so we have had a lot of other people who we don’t see upfront but have contributed to a race team to be successful.

“We structured the entire leadership team which took some time, where Andreas has his race team where he wanted and of course you want to have two great drivers that we have today but to have a seven-time winner, it is an absolute benchmark which is great for the team and also it gives Lando a chance to step up against Ricciardo. I like the combination.   think these movements would have probably happened with or without COVID because we started these conversations pre-COVID.”