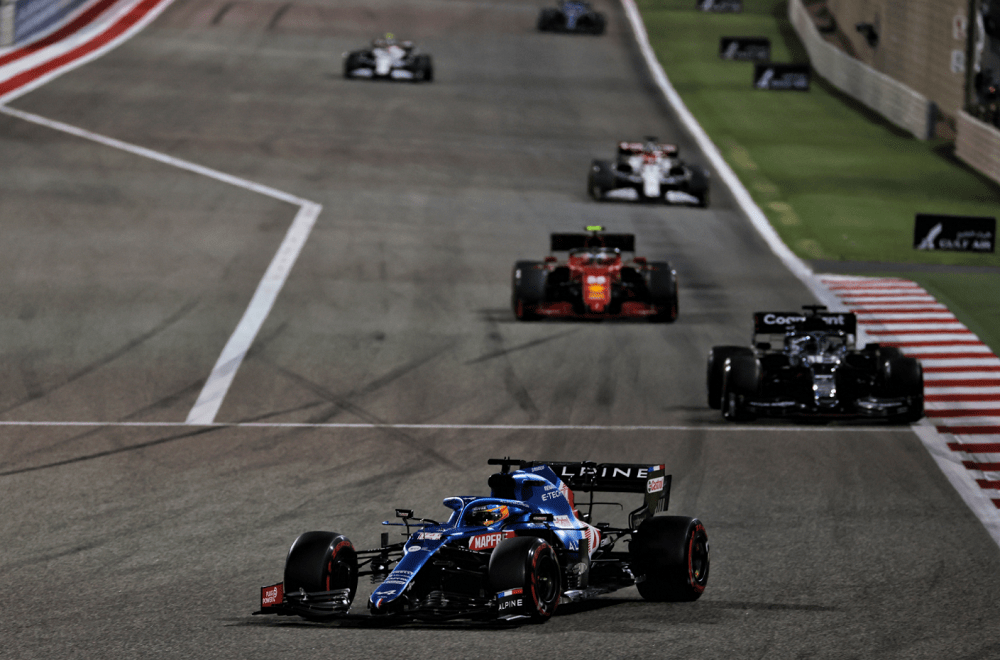 Fernando Alonso agrees with the back and forth prediction for the 2021 F1 season, as he feels the competitive midfield continue to outshine each other.

From the lot of McLaren, Aston Martin and Alpine, who fought against each other in 2020, only the former kept their competitive nature in the opening round of the 2021 F1 season, while the other two faltered, with just the single point against their names.

For Aston Martin, the regulations changes to cut downforce has hurt their calculations, but for Alpine, it is not clear at this juncture. During the practice session, it was said that the team did not push enough, but in qualifying, they were not a certain Q3.

Alonso made it in eventually but in the grand prix, he mostly fought for positions around 10th. Teammate Esteban Ocon was far behind, as they returned empty handed, after the Frenchman was hit by Sebastian Vettel and the Spaniard retiring due to brake issue.

They seemed confident still for the season ahead, but Alonso noted that it will be up and down all-through, where some tracks will suit them, while others don’t. Alpine is slated for some upgrades in the upcoming races, which they hope push them up a bit.

“I think it’s gonna be very, very close in the midfield,” said Alonso to written media. “A couple of weekends will be better for some teams, the next weekend maybe you have a better layout for a different team than the week before. I’m optimistic that we can have a good season, some weekends it will play into our [hands].

“In Bahrain, I was happy to race with the McLarens, in front of one Ferrari and behind the other one. I felt competitive in that group. In qualifying, Leclerc was six tenths ahead of us but in the race we were in the mix for that first stint, so I think there are positives to take from the race and we have to be confident that we will have some good weekends.

“It is difficult to say what the pecking order is. I think we saw different results and a bit of mixed feeling for everybody including us in Bahrain. Sometimes we look better sometimes we look a little bit down. We will need a couple of races to have a more established order, so let’s wait and see.

“Our job is to work harder and identify our weaknesses if there are any and work on those and keep our strengths. It is an interesting season for everybody. We will constantly improve the car because there are always clever people in the team thinking of new solutions. Sometimes [innovations] will be more noticeable, sometimes [they won’t].

“Things like the aerodynamics may be more obvious for everyone to see, but there are some improvements inside which are maybe not so obvious, but we are pushing every weekend to produce something better than the previous one. Imola is the next opportunity, after winter testing and the first race you usually improve the car a lot because you learn a lot of things in these first races.

“I am optimistic that in Imola we’ll see another step forward,” summed up Alonso. Talking about his own performances, Bahrain showed the old grit of the Spaniard, even though, he didn’t feel 100 percent due to jaw injury. He hopes he can show more of it in time to come, as he takes 2021 to prepare itself for the 2022 F1 season.

“I think it is going to be okay,” said Alonso. “You will enjoy the comeback and you will enjoy the fight that we will put in every weekend. I think we always said from the beginning that this is a very interesting and Alpine is in F1 for big things.

“Maybe 2021 is a continuation of 2020 and we are building the momentum and something more important heading into 2022. I hope you will enjoy this comeback,” summed up Alonso. Looking at the teams, it certainly looks to be a solid fight with Ferrari, AlphaTauri and Alfa Romeo not far away along with McLaren, Aston Martin and Alpine.

Here’s Fernando Alonso on being positive despite no points