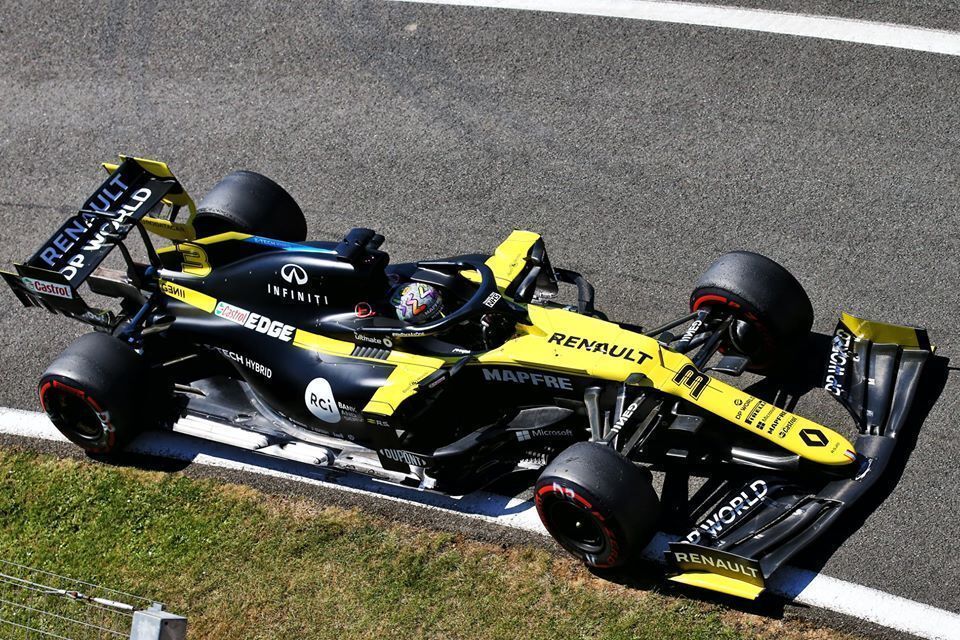 The Friday in F1 70th Anniversary GP was over-shadowed by the off-track dramas but the leading teams were well settled, although, the tyres were key talk.

For the second consecutive race weekend at Silverstone for F1 70th Anniversary GP, Mercedes were front-of-the-field on Friday, as they dominated both FP1 and FP2 with one-two finishes in both of these sessions as drivers shared one each.

Last weekend, Hamilton lacked confidence heading into Saturday as he failed to nail down a set-up, but this weekend, he is in a much better position, as he made clear at the day’s end. “It’s been a good start to the weekend,” he said. “We brought a lot of learnings over from last week and with just a few small adjustments to the set-up we’ve been able to fine-tune the car and make some progress, which is positive.

“Both the Soft and Medium tyres feel very similar out there and there’s not a huge amount of time between them. We saw some overheating with the tyres, so they are going to take some nursing to get the best out of them.” Bottas, too, felt his set-up was preferable to that at the start of last weekend, as he even stated that it is almost where he feels it should be.

Another driver who did well to start his weekend was Red Bull Racing’s Max Verstappen, who was third in the morning, and fourth in the afternoon. The same could not be said for his teammate Alexander Albon, who struggled with balance on the softer tyres – a hindrance especially as the tyre compound range has become one step softer for this second F1 Grand Prix.

Albon stated that the new range is too soft for the circuit, the result of which is a medium tyre that is preferred over the soft, at least from his perspective. Both of his fastest laps were driven on the softs, but these laps were considerably slower than those of his teammate, as was indicated by his P6 in FP1, and his P11 in FP2.

“We’re making progress session by session in terms of trying to get what I want from the car and now we just need to do our homework tonight to come back stronger,” said Albon. “It was a pretty straightforward day and we played around with a few things to see what helped and what didn’t. This weekend the tyre compounds are a step softer which I’m not a huge fan of as I think they’re too soft for this F1 circuit.

“Let’s see what everyone does but I think it’s quicker to run on the mediums than the softs. The thing is we only have a certain number of medium and hard tyres for the weekend which means you’re a little stuck with strategy, so it will be important which tyre you decide to run in each qualifying session.”

Verstappen, meanwhile, explained that he’ll be looking over his shoulder in qualifying despite making some improvements, though he feels he’ll have the edge over the rest of the chasing pack in the F1 race – an indication that it could be another lonely outing with Ferrari and probably Racing Point a bit behind on him.

Leading the Dutchman in the afternoon’s session was Renault’s Daniel Ricciardo, who impressed to finish P3 in FP2. His time in the morning was, admittedly, less competitive, though this was explained away by the F1 team, who were attempting to gather data.

The Aussie was happy walking away from the day, his optimism highlighted by some comments about Renault potentially fighting for third place in the constructors’ championship. “In the morning we did quite a bit of data gathering so we knew it wasn’t going to be totally representative,” said Ricciardo.

“For the afternoon, we had a bit of a warm up, made a change to the car, which worked, and it felt great. We had a good run on the hard and then on the soft as well. On that soft run, we still missed out a bit in some areas, so there’s definitely more there. Our long runs also looked decent, so that’s a good base for Sunday.

“I think the wind direction is changing, so we’ll see what happens there. Overall, it’s been a good day for us.” Esteban Ocon, meanwhile, did well to come P10 in both of the day’s sessions. He would go on to state that the car responded well to the soft tyres. Though Renault showed glimpses of exceptional pace, their close rival Racing Point appeared to have better form on Friday, with Nico Hulkenberg particularly boasting some competitive times – enough to deliver him P4 in FP1 and P6 in FP2.

The German, who was only confirmed as the team’s driver after Sergio Perez once again tested positive for COVID-19, explained that the week in between F1 races has allowed him to get more time in the simulator, and therefore get acquainted with the RP20. He added that he is more comfortable with the team after what he described as a ‘routine Friday’, seemingly ignoring the lively debate over the FIA decision regarding the team’s car design.

“I’m feeling a lot more confident in the car: it helped that I was able to be in the simulator last week to prepare for the weekend,” said Hulkenberg. “I’m much more familiar with how the team works and I’m more up to speed behind the wheel. It felt like a routine Friday and I was able to extract the pace of the car much more quickly, which is a big positive.

“I’m pleased with today because we were able to try a few things with the set-up of the car, and it helped me adapt to the car. We were then able to work through programme effectively, which gives us a good starting point for the weekend. I felt that there was pace to be found on the medium tyre because I didn’t have a totally clean lap, and I left some time on the table at the final corner, but all in all, it was a positive Friday.”

Lance Stroll didn’t add much to Hulkenberg. Over at Ferrari, it was a usual mixed run as Charles Leclerc was happy to have announced himself as a serious contender in this F1 race’s mid-field fight, after coming P5 and P7 in FP1 and FP2 respectively. He did, however, admit that the day was less straightforward than last Friday at the track.

“It wasn’t bad, although a bit more difficult than last Friday,” said Leclerc. “We are working to try and understand the tyres, as there’s quite a big change of grip between the Medium and the Soft. We are a bit too slow on the Medium, which is unusual for us. The car balance feels pretty good, it’s just the general performance which is not as good as we had hoped for on the Medium.

“There are still a few things to work on in view of qualifying tomorrow with the aim of going through Q2 on Medium tyres, which we think a lot of cars will try to do. Anyway, it’ll be very interesting to see what compound everyone will start the race on and it should be an unpredictable race with many different strategies.” Vettel, meanwhile, struggled similarly to how he did last weekend. The German had an early stop after oil leak and an engine trouble with a new one likely to be fitted for Saturday and Sunday.

Leclerc looked to have the edge over McLaren, the British F1 team approaching the weekend cautiously, as they anticipated exacerbated struggles on the softer compounds. Lando Norris would – like his teammate – only make it into the top ten in the afternoon of what he considered to be a ‘less-straightforward’ day.

“A tricky day, not as straightforward as last weekend,” said Norris. “Trying to understand these tyres was a bit more difficult as they are quite soft. Obviously, everyone out there lapped pretty well on new tyres, but they degrade a lot in the high-fuel long runs. So, we’re struggling with getting them to last, but at the same time I think we got a good understanding of the balance. Like last week, I think conditions are going to change quite a lot come tomorrow, so we’ll wait to see what happens.”

AlphaTauri, meanwhile, was split, as Pierre Gasly felt there was more work to be done, while Daniil Kvyat – coming off from a heavy crash – was happy with his productivity. Over at Haas, the message was equally murky. While Romain Grosjean felt the car was a rocket in FP1 but lost speed in the changed colder conditions of FP2, Kevin Magnussen thought the exact opposite, after actually finishing last in the first session.

For Alfa Romeo, the day was not what they had hoped, as the three drivers used by the team – Robert Kubica, Kimi Raikkonen, and Antonio Giovinazzi – all complained of lacking pace. Seemingly having the edge over them, Williams’ drivers both reflected on their days positively, Nicholas Latifi being particularly chuffed with how he found his rhythm in this second week at Silverstone.