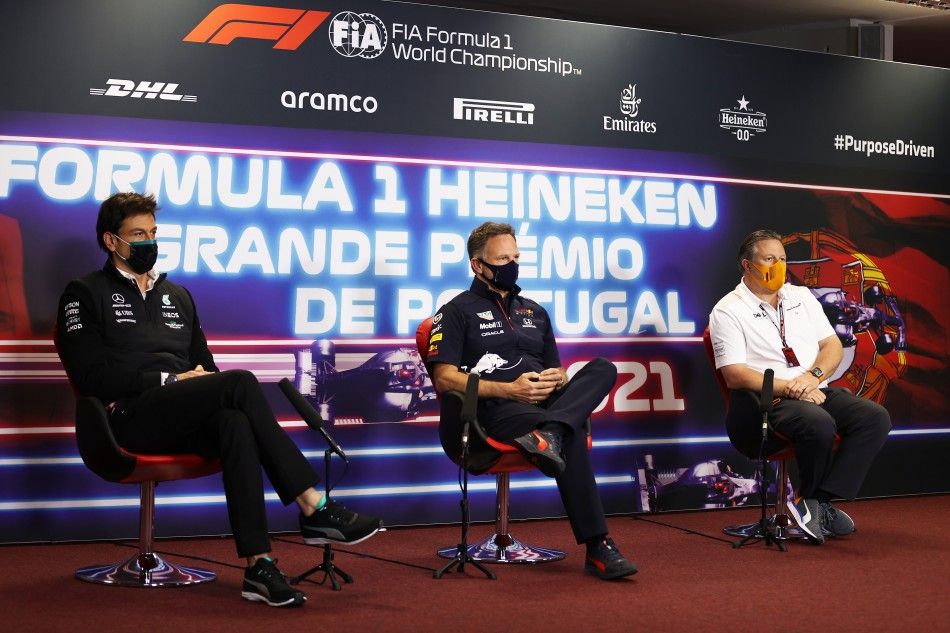 As Red Bull moves ahead with the big challenge of having its own power unit in the future, rivals – especially Mercedes – are not letting them get away without any speculations. Over the weekend in Portugal, Toto Wolff has kick-started quite the speculation.

As per Wolff, he reckons Red Bull will eventually partner-up with Volkswagen and use its brand – either Porsche or Audi – in F1, when the new engine regulations kick-in from 2025 or 2026. The Austrian thinks if they do it, it will be a good plan on their end.

Christian Horner, though, did not wish to dive into who Red Bull partners with, as he spoke more about the big step from the F1 outfit to get themselves into powertrain business. The two spoke about their thoughts to Sky Sports.

Wolff and Horner on Volkswagen topic –

Wolff: “On one side, they are keen on doing their own power unit, but it’s no secret that the Volkswagen Group with their two brands is looking at Formula 1, and has been part of the discussions. So Red Bull can at any moment decide if they want to stick to their own power unit, or go with a top German manufacturer.

“On the other side, the arrangement they have on the IP side with Honda is really makes sense. They are taking over the IP from Honda and obviously developing the new power unit into 2025. It could stay within Red Bull power units, or it could go to Porsche/Audi. So overall, I think it makes sense what they do.”

“I think it’s very early stages. They’ve expressed an interest, and that was public, and in that respect, I would very much hope that they enter the sport. Volkswagen Group has a historic connection with Red Bull all over the platforms, and it’s just logical that they are going to look at a relationship with Red Bull, and if they can utilise the Honda IP, and the learning there from whatever Volkswagen power unit would enter. I’m saying would, because I have no idea and it is none of my business. But they will benefit from all these relationships and intellectual property carried forward.”

Horner: “At the moment, there’s no discussions in place, it’s focused on being called a Red Bull engine. But of course that engine could be called anything in the future. But to have it integrated fully into Milton Keynes is tremendously exciting. Toto always likes to think he knows what’s going on in other people’s business, perhaps he needs to think about his own.

“We’re building a fantastic facility, we’ve got some great talent coming into the facility. It’s going to be on campus, it’s going to be integrated fully with the chassis side of the business, we’ll be the only team other than Ferrari to have that. What the engine’s called is another matter. At the moment there’s no discussions in place, it’s focused on being a Red Bull engine. Of course that engine could be called anything in the future. But to have it integrated fully into Milton Keynes is tremendously exciting.”

The two carried on in the press conference where the topic of Red Bull taking in Mercedes HPP personnel Ben Hodgkinson was discussed. Both Wolff and Horner indicated of more hiring, especially from the former’s outfit to the latter.

Wolff: “I think the right strategic steps have been, as far as I can see, set in motion from Red Bull. I think they are going dual track with their own power unit and maybe with a new OEM joining in, and that’s certainly intelligent and the arrangement that has been found with Honda in the carrying over the IP is also clever. It’s clear that they are going to hire English engineers because it’s in the United Kingdom and there is not a lot of companies that can probably provide those engineers.

“So absolutely understood what the strategy is. I guess it was expected that this would happen [taking Mercedes HPP personnel] and this is just a battleground such as the one on track. You need to acknowledge that and the last few weeks were certainly very much pulling on… how do you call that? Pulling on both sides of the rope, which I enjoyed. It’s part of the competition. You need to take it as a sportsman. Sportsmanship.”

Horner: “Obviously we’ve done our research. I think setting up the powertrain facility on campus, within Red Bull in the UK, you don’t have to look very far to see obviously the talent that there is, certainly based within the UK and, of course, the outstanding job that Mercedes have done, not just during the last seven years but the last 15 years in reality. And I think this is the first serious engine facility that’s been set-up in the UK, other than HPP maybe in the last 50 years.

“So, it’s a tremendously exciting opportunity and for us it’s a matter of identifying the right talent, attracting that talent, exactly as we did with the chassis side. Obviously, proximity within the UK as well is very convenient for that. So having identified the right guys, Ben was a standout-candidate for us and we’re delighted that he accepted our offer and decided to join the team. I think it’s a very clear statement of intent that we’re obviously investing heavily within the facilities on campus.

“It’s probably the single biggest investment that Red Bull have made in Formula 1, certainly since acquiring the team from Jaguar back in 2004. It’s a great commitment and of course we’re gearing up to take on, embrace whatever the new regulations are for, whether it be 2025 or 2026. It’s a big challenge but it’s an exciting challenge and one that we fully embrace. I think other than Ferrari it makes us the only team to produce chassis and engine in-house and to have a fully integrated solution between both technical teams.

“That’s particularly exciting and attractive. We are assembling an exceptionally talented group of people together and we are only at the beginning of that journey. In terms of what that engine will be badged – as I said before – at this point in time it’s clearly focused to be a Red Bull engine. That is the commitment and that is the design group we are bringing together to focus on the new regulations.

“We have effectively a soft landing thanks to the IP usage we have a principle agreement with Honda with. So it’s exciting times and I think it puts Red Bull in truly unique situation, to have everything housed on one campus under one roof and to really make use of those synergies. And particularly in a cost cap world, with cost caps potentially coming into powertrains as well, it makes that achievable for a company such as our own.”