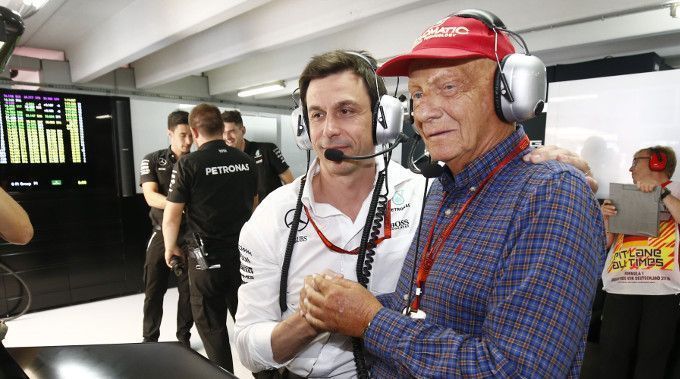 As F1 head towards Monaco GP, one of the biggest and iconic races on the calendar, the sport has lost one of its true hero and legend in all aspect, Lauda, after the Austrian fell away in the battle with his life at the age of 70-years on May 20, 2019.

Lauda underwent a complicated lung transplant last year and it has been an uphill battle ever since for the three-time F1 champion. He was fighting his ill health to return to his work as the Mercedes non-executive chairman, but it wasn’t to be.

Wolff, who worked alongside Lauda for the past few years as together they took multiple world championship titles – whether the constructors’ or the drivers’ – in their kitty, shared a heartfelt message on the passing of the Austrian.

“First of all, on behalf of the team and all at Mercedes, I wish to send our deepest condolences to Birgit, Niki’s children, his family and close friends,” said Wolff in a statement released by Mercedes.

“Niki will always remain one of the greatest legends of our sport – he combined heroism, humanity and honesty inside and outside the cockpit. His passing leaves a void in Formula 1. We haven’t just lost a hero who staged the most remarkable comeback ever seen.

“But also a man who brought precious clarity and candour to modern Formula 1. He will be greatly missed as our voice of common sense. Our Mercedes team has also lost a guiding light. As a teammate over the past six and a half years, Niki was always brutally honest – and utterly loyal.

“It was a privilege to count him among our team and moving to witness just how much it meant to him to be part of the team’s success. Whenever he walked the floor in Brackley and Brixworth, or delivered one of his famous motivational speeches, he brought an energy that nobody else could replicate.

“Niki, you are quite simple irreplaceable, there will never be another like you. It was our honour to call you our Chairman – and my privilege to call you my friend.” While Liberty Media’s Carey hasn’t been around to know him that well but shared a message too.

“It is with great sadness that we learned of the death of Niki Lauda,” he said. “Formula 1 has lost not only one of the truly great exponents of the sport but also one of its heroes. His love of racing and the courage he demonstrated were simply extraordinary and he inspired so many fans.

“His passing is a great loss for the entire Formula 1 family and motorsport as a whole. All our thoughts go out to his family.” And finally, Todt added: “Niki Lauda was a hero of motor sport, who inspired me in my youth.

“He is a milestone in the history of F1. All my thoughts go out to his family, friends and Mercedes team.” Apart from the three eminent personalities in F1, tributes are coming in from everyone in the motor racing community, some of it will be shared later in a piece.