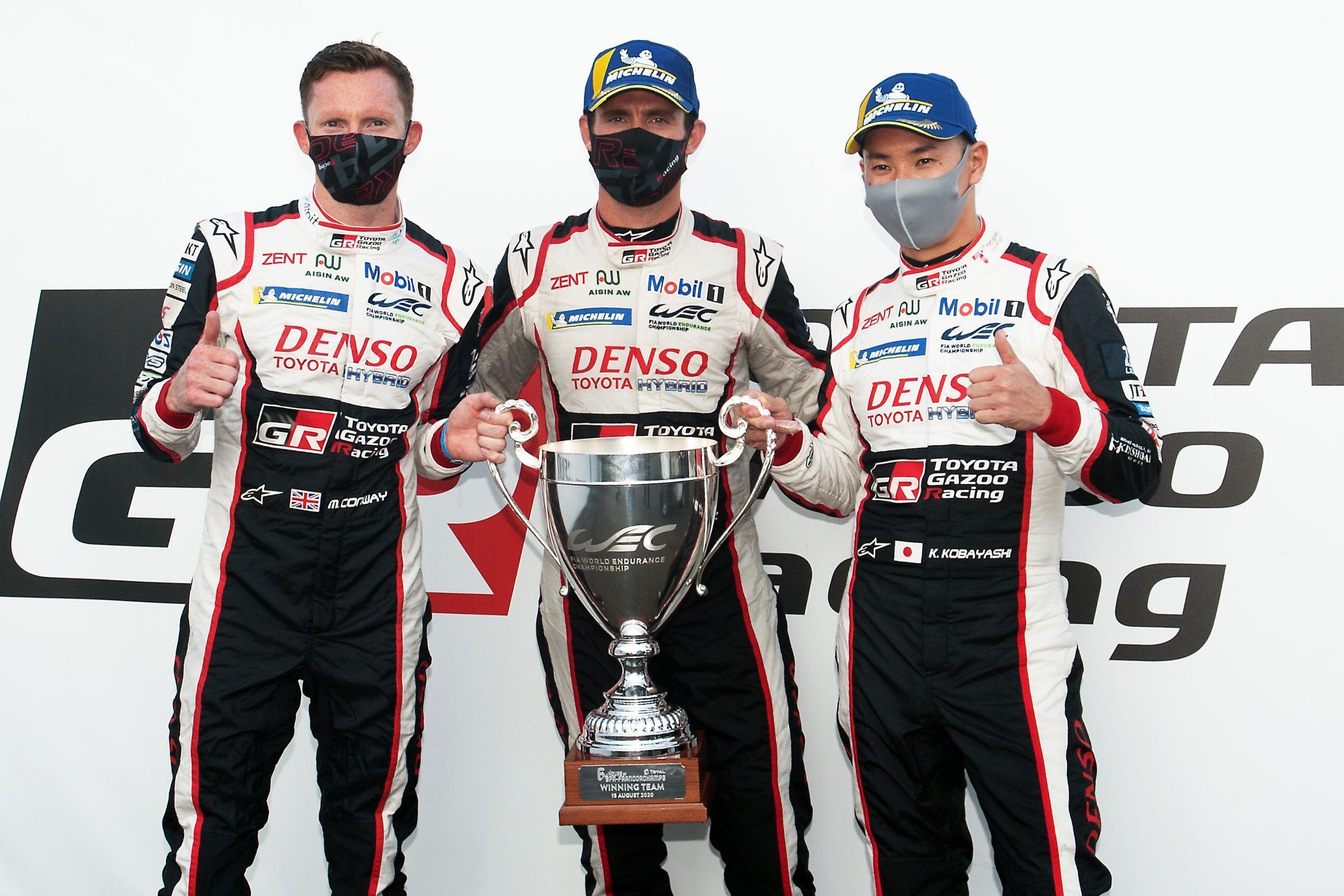 The WEC 6 Hours of Spa-Francorchamps saw extremely changeable weather conditions including four safety cars due to intermittent rainfall and incidents out on track. After a week of extremely hot temperatures, the rain returned to Spa-Francorchamps where tyre choice played a major factor in action-packed race.

Rebellion Racing started on pole in LMP1 category but the Swiss team suffered an early setback when Norman Nato lost valuable time due to high tyre pressure issues in the opening stint. The squad was unable to make up the time lost to the Toyotas in the changeable weather conditions and eventually saw the trio of Bruno Senna, Gustavo Menezes and Norman Nato finish third in WEC 6 Hours of Spa-Francorchamps. Menezes did, however, post the fastest lap of the day with a time of 1:59.432 on the 92nd lap.

The win for the Toyota Gazoo Racing in WEC 6 Hours of Spa-Francorchamps in LMP1 marks the third win of the season for the No. 7 car (and fourth for the squad) and sees the No. 7 entry extend its lead at the top of the overall leaderboard to 12 points. The sister car driven by Sebastien Buemi, Kazuki Nakajima and Brendon Hartley made it a Toyota 1-2, the team crossing the line 34.179 seconds behind the race winners.

Early in the race, the No. 8 was in the lead but a decision to pit early to change to slicks proved detrimental as the rain returned shortly later and relegated the team to second place, where they remained for the rest of the race. Elsewhere, WEC returnees ByKolles Racing Team finished fourth – the team plagued with electronic problems throughout the event.

It proved a thrilling battle in the LMP2 category as Giedo Van Der Garde put in a superb opening stint in the No. 29 Racing Team Nederland entry, which saw the Dutch team take an early lead.  It was not to last, however, as United Autosports fought back in the changeable weather conditions and faster pitstops to take the lead going into the race’s final two hours of WEC 6 Hours of Spa-Francorchamps.

Second place went to the No. 42 Cool Racing ORECA 07 Gibson fronted by Nicolas Lapierre, Antonin Borga and Alexandre Coigny. The Swiss team got off to a difficult start pitting early to mark a driver change but the trio made a mighty comeback eventually crossing the line ahead of Racing Team Nederland who finished third.

The No. 36 Signatech Alpine Elf entry looked on course for a top three position but there was drama in the race’s closing hour when Thomas Laurent crashed heavily at Blanchimont after making contact with another car. Fortunately, 22-year-old Laurent walked away from the car but was taken to the medical centre for further checks.  The incident brought a 36-race points-scoring streak to an end for the French team.

The LMGTE Pro category provided non-stop action between all three manufacturers represented in today’s TOTAL 6 Hours of Spa-Francorchamps, and at the chequered flag it was the No.92 Porsche 911 RSR of Michael Christensen and Kevin Estre which claimed the laurels for the first time this season.

It was a first win for reigning champions Estre and Christensen since Fuji 2018, and a first Porsche victory from pole in GTE Pro since Team Felbermayr Proton at Fuji way back in 2012. With several rainstorms and four Safety Car periods – the first 17 minutes of the race were run behind the Safety Car due to very heavy rain – bringing about different strategies, the Porsche came home ahead of the No.95 and No.97 Aston Martin Racing entries.

The Dane Train of Nicki Thiim and Marco Sorensen in the No.97 crossed the line just 5.6s behind the winner of WEC 6 Hours of Spa-Francorchamps, with the sister No.97 – which featured the only Belgian driver in the race, Maxime Martin, together with Briton Alex Lynn – taking the final podium spot.  Aston Martin Racing’s Team Principal confirmed during the race that a wrong wet weather tyre choice had hampered them in the first hour of heavy rain.  Once resolved, the two Aston Martin Vantage AMRs performance was much improved and both cars were in contention for top spots.

All three manufacturers led the race at different stages and provided continual entertainment.  Despite being at a power disadvantage following the latest BoP, the No.51 AF Corse Ferrari 588 GTE EVO was at the head of the field for much of the race thanks in large part of a marathon 4h 13 minute stint from Alessandro Pier Guidi, the Italian displaying some great driving skills in difficult conditions.

Many competitors were in fuel-saving mode in the final stages, trying to avoid having to make a final splash and dash, with the final SC period in the fifth hour undoubtedly helping some more than others. The LMGTE Am also provided plenty of action and lead changes but the supremely consistent No.83 AF Corse of François Perrodo, Emmanuel Collard and Nicklas Nielsen claimed victory after a hard six hours of action.

It was a second victory this season for the trio, and the No.83 became the first Ferrari to score multiple Am wins in a season since SMP Racing in 2015.  The result stretches their lead at the head of the points table to 110 points, 12 ahead of third place finishers No.90 TF Sport.

Coming home second in WEC 6 Hours of Spa-Francorchamps, after a race which saw them feature strongly at the start and then again in the final two hours, was the No.77 Dempsey Proton Racing Porsche 911 RSR of Christian Ried, Riccardo Pera and Matt Campbell.  The Australian was on a charge at the end and crossed the line just 2.8s behind the winner to give the team its best result of the season so far.

As said, the No.90 TF Sport Aston Martin of Salih Yoluc, Charlie Eastwood and Jonny Adam claimed the final podium spot and the result consolidated their position in the points standings with double points yet to come for the 24 Hours of Le Mans and 1.5 points for the final round of the season in Bahrain.

Full provisional result of WEC 6 Hours of Spa-Francorchamps can be found here.

[Note: The above is as per the press release from WEC with no edits made, FormulaRapida.net has not written it]