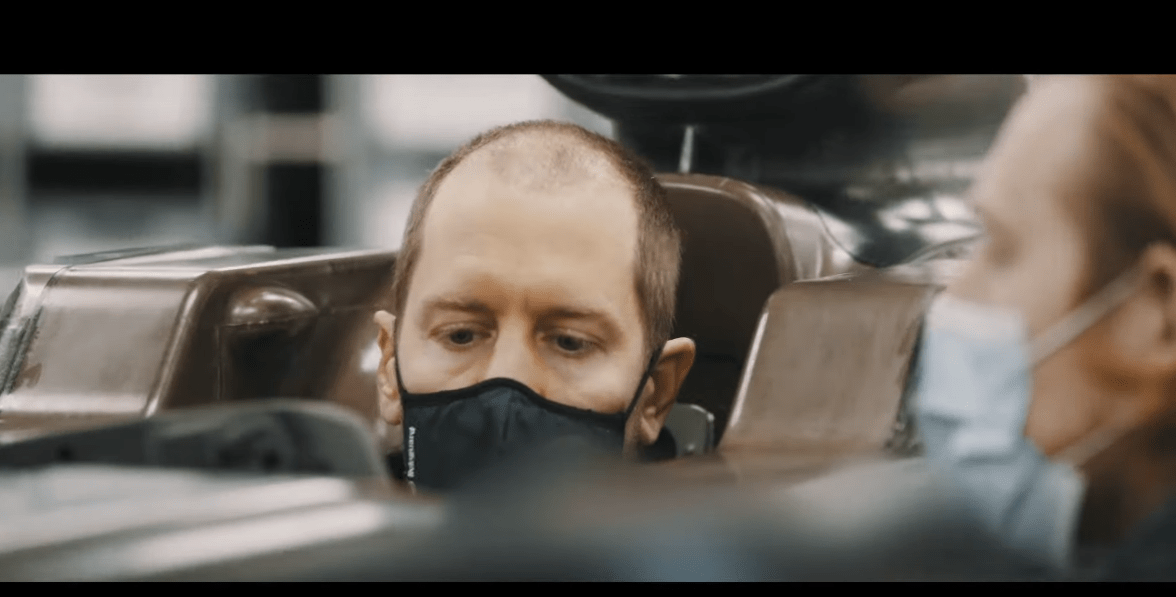 Sebastian Vettel completes his seat fit at Aston Martin, as Carlos Sainz made his debut for Ferrari, while Yuki Tsunoda tested with AlphaTauri and McLaren fires-up Mercedes F1 engine.

Following on from the video of Vettel entering the Aston Martin factory at its Silverstone F1 base, the team shared his seat fit look on Wednesday. The German presented a new hairdo in a plain white helmet with the German flag inscribed on it.

Aston Martin is only sharing the videos now after Vettel visited the base last weekend for his seat fit. He also met Andrew Green and the engineers, whereas he also completed his first run in the simulator to get up to speed with the new F1 car.

Here’s the video of Sebastian Vettel:

Moving on to Ferrari, after the academy trio and Charles Leclerc, it was the turn of Sainz to drive the 2018 SF17H on Wednesday – his first time driving the Italian manufacturer’s car since joining them. The Spaniard got a full day and will continue on Thursday morning too.

Post Sainz, it will be Haas F1 driver Mick Schumacher’s turn. Having visited and tried the simulator at Maranello, the Spaniard had his dream come true, driving the 2018 F1 car. All winter, he had been itching to drive the Ferrari car, albeit, the 2021 machine.

“A day I will never forget,” said Sainz. “This morning, the alarm went off at dawn because we had some very early meetings before going out on track. One of the most special moments for me today was when I arrived at the circuit and I saw the Ferrari with my number 55 on it! I was eager to jump in the car and that first installation lap was exciting.

“Then we got down to work and I am very pleased with how the day unfolded. We were able to get through an extensive programme and I was able to familiarise myself with the whole setup: the engineers and mechanics, the steering wheel, the procedures which are obviously a bit different to those on the car I drove last season.

“It was very nice to have my father there at such an important moment in my career. And I’d like to thank Mattia, Laurent and everyone at Ferrari for such a warm welcome and such a positive first day in the 2018 car. I am very happy and could not have wished for a better start,” summed up Sainz, as overlooking him was his father and also Ferrari boss John Ellkann.

While Sainz was testing at Fiorano, another of Red Bull related driver, Tsunoda, was at Imola in a AlphaTauri (Toro Rosso) – possibly the 2018 machine. The Japanese got a much needed track time amid limited test run ahead of the 2021 season.

This is Tsunoda’s third run after his first coming last year at Imola as well, while the second was post-season at Yas Marina circuit. The Japanese recently returned to Europe after spending time in Japan, as teammate Pierre Gasly trains in Dubai.

And finally, the first engine fire-up of the 2021 F1 season was completed by McLaren at their Woking base. The team shared the raging engine of Mercedes-Benz, as they re-unite with the German manufacturer for first time in the hybrid era.

Here’s a recap from Aston Martin, Valtteri Bottas and Ferrari from Tuesday