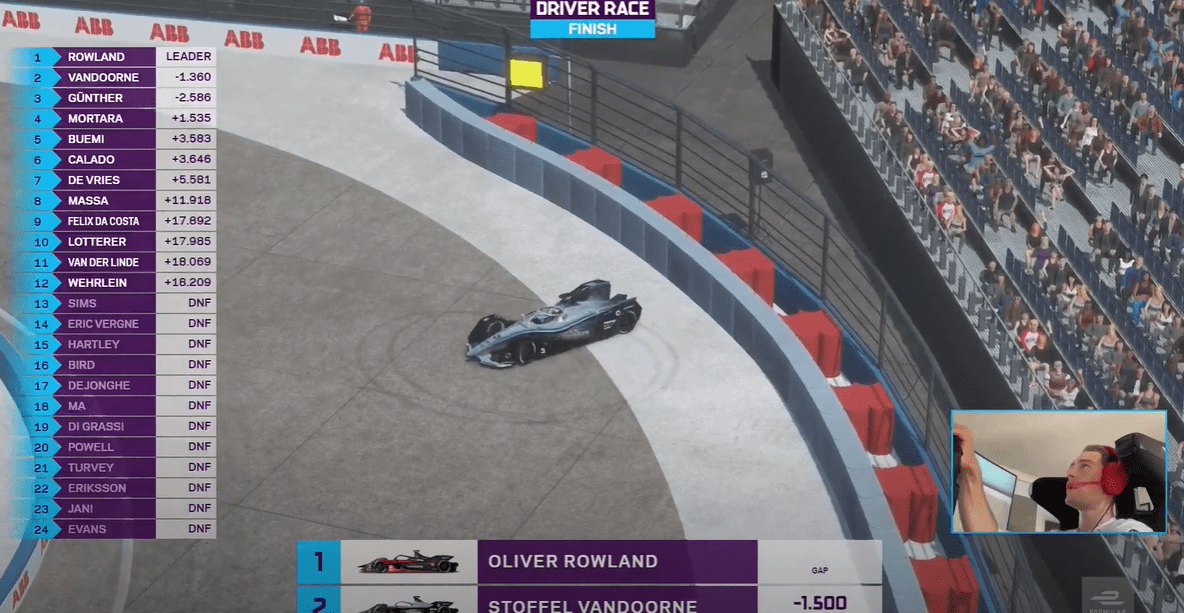 Formula E had its sixth round in the Race at Home Challenge with Stoffel Vandoorne winning the championship from Pascal Wehrlein.

The sixth and seventh Formula E Race at Home Challenge ESports round took place at New York’s circuit. As in other rounds, they had two races, where one was the Challenge Grid with a mix of ESports racers and real racers along with some Youtube personalities.

The other one was the actual Formula E drivers as they used the rFactor 2 game. The Challenge Grid on Saturday saw Mahindra Racing Lucas Mueller take pole as he led the way to win at ease ahead of BMW Andretti’s Kevin Siggy and Jaguar Racing’s Joshua Rogers.

Over in the main Formula E Race at Home Challenge on Saturday, Mahindra Racing’s Pascal Wehrlein got pole from Audi’s Kelvin van der Linde and Nissan’s Sebastien Buemi. The German led the way all-through to score another victory.

Van der Linde had a supreme debut and was all set to finish second until Nissan’s Oliver Rowland barged through on the last lap to take the place. Behind, Mercedes’ Stoffel Vandoorne was fourth ahead of BMW Andretti’s Maximilian Gunther.

Venturi pair of Felipe Massa and Edoardo Mortara were sixth and seventh as the Top 10 was then completed by DS Techeetah’s Antonio Felix da Costa in eighth from Envision Virgin’s Robin Frijns and NIO’s Oliver Turvey.

Here’s where you can watch it in full: https://www.youtube.com/watch?v=L0yN6Rax7sI

The Challenge Grid saw Siggy on pole as he fended off Mueller to win the finale at the Berlin circuit as he now has a chance to drive the real Formula E car, which is a prize for winning the competition. Jaguar’s Petar Brljak ended up third.

Over in the main Formula E Race At Home Challenge, it was Rowland on pole from Wehrlein and Vandoorne as the Brit started off well but it wasn’t good for the German as he was spun by the Belgian when he was hit by Buemi from behind.

Wehrlien dropped down the order as Rowland headed Vandoorne and Guenther, which he held for the rest of competition to win the Formula E Race at Home Challenge finale as the Belgian took the overall drivers’ championship eventually.

Wehrlein could only manage ninth, which was not enough after his hefty fight with da Costa and van der Linde, who was 10th. But post-race, both the German and the Portuguese racer got penalised, allowing the South African to be ninth and Lotterer 10th.

Meanwhile, outside the podium was Mortara in fourth with Buemi fifth, Jaguar’s James Calado sixth, Mercedes’ Nyck de Vries seventh and Massa eighth. In the teams’ standings, Mercedes won from Nissan and Mahindra.

Here’s where you can watch it in full: https://www.youtube.com/watch?v=2eQBYTETaXQ