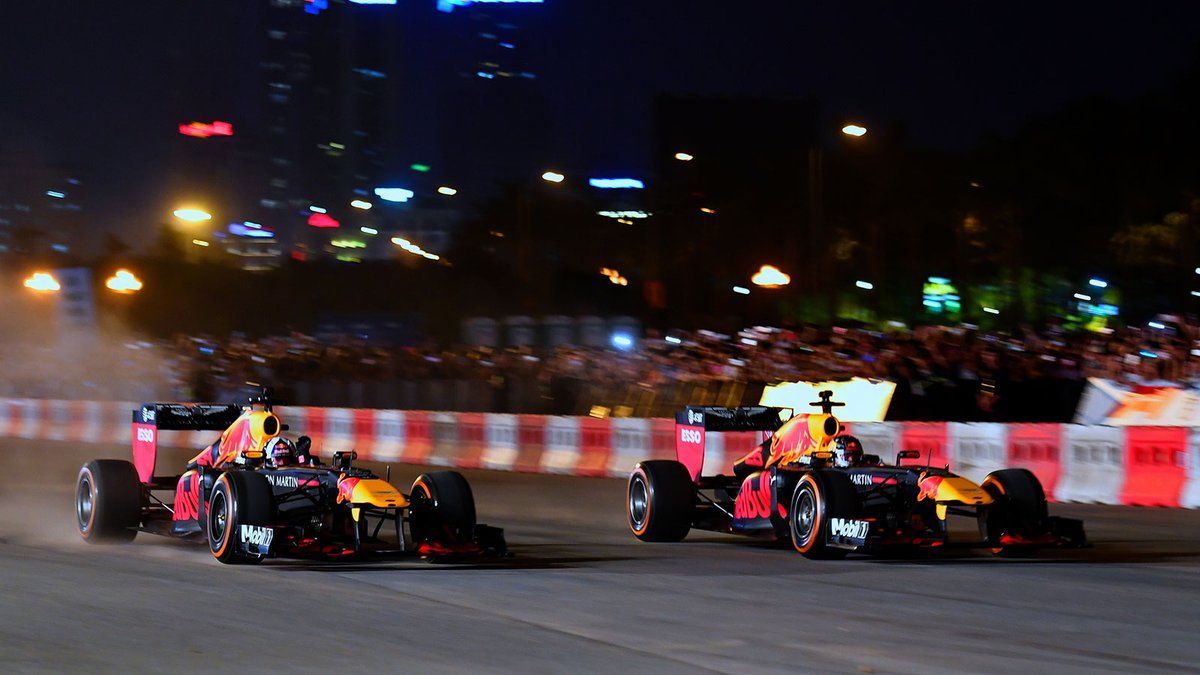 Red Bull Racing’s David Coulthard and Jake Dennis enthralled fans with a F1 showrun in Hanoi ahead of the inaugural Vietnam GP.

This is Red Bull’s second visit to Vietnam after Coulthard had undertaken a showrun in 2018 before the F1 grand prix was announced to visit the Asian country. With the race now confirmed for April 2020, Red Bull gave a teaser to what the fans can expect in the future.

This time though, Coulthard had Red Bull’s simulator driver Dennis alongside him while DJ Armin Van Buuren – Heineken’s brand ambassador – was also present for the show on the streets of Hanoi. The drivers had a pair of RB7 to play with for the runs.

The two ran on the cordoned off 700m stretch where nearly 50,000 fans gathered past 7 PM local time to get vowed by the F1 cars zooming past them. “It’s great to have the opportunity to drive the RB7 again and to see the energy of the crowd,” said Coulthard.

“It was pretty hot and heavy out there and I think they’re well warmed up for Heineken Ambassador Armin Van Buuren’s DJ set. After our efforts on track, he’ll now show them how Formula 1 likes to party.

“It was pretty dusty out there but in fairness to the city they’re building a grand prix track on this site as we speak but it just added to the visual aspect. It was very warm out there but it was really great to have the chance to do it.

“The energy that these show cars bring around the world is amazing. Red Bull are the top team when it comes to bringing F1 power to people around the globe, so it’s only fitting that we’re here to mark the one-year countdown to the first race in Hanoi.”

Meanwhile, Dennis added: “It was a pretty cool experience and sharing an F1 show with DC has been an absolute privilege. The fans here have been incredible. The donuts at the end were great fun and to stand on top of the car with the fans going crazy was fantastic.

“I definitely won’t forget it.” As mentioned above, their first visit came in 2018 but it was in Ho Chi Minh City, whereas the 2019 visit is at Hanoi – the venue for the 22-corner street F1 circuit, where work started after FIA president Jean Todt’s visit in March.