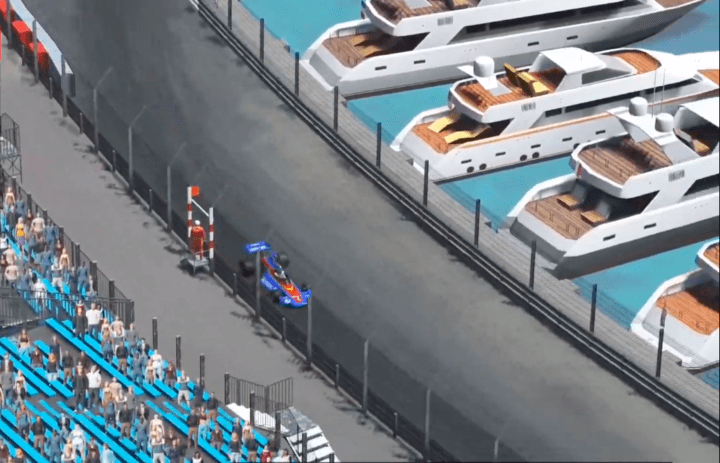 The All-Star ESports Series continued with Fernando Alonso winning in Monaco as Veloce ran the Not The GP in Baku.

In round one of the third season of the All-Star Esports Series, the competition was run at Monaco in rFactor2, this venue being the first of three, with the two others being IMS (Indy500) and Le Mans, so as to have the full ‘triple crown’ of racing.

The first race was the Pro Cup with the real-world drivers, with Formula E’s Oliver Rowland leading the charge from pole at the start of the race, and maintaining this lead for the duration of the race, crossing the line to win.

Behind him Augustin Canapino came second and Job Van Uitert third. It was Yifei Ye in fourth, ahead of Tom Dillmann. Like in previous championships, there was also a Legends Trophy, and also like in seasons prior, it was Fernando Alonso on pole.

He went on to lead the bulk of the race, and most importantly, the final lap to win the Monaco GP – in his aim to do a Virtual Triple Crown. Juan Pablo Montoya came second, ahead of Jan Magnussen with Petter Solberg fourth, leading Helio Castroneves.

The reversed-grid races came next, with Beitske Visser on pole, leading a grid of real-world drivers in the Pro Cup. However, it was van Uitert who took the victory, leading Christodoulou, Bradley Smith, Dillman and James Pull.

For the reverse-grid Legend’s race, it was Jason Plato on pole, but Andy Priaulx was the one to navigate the field and find his way to the front first, leading Montoya, Castroneves, Alonso and Plato after Solberg disconnected having run second.

Here’s where you can watch it in full: https://www.youtube.com/watch?v=w6-7nWxQtxw

Veloce Esports Not the… GP in Baku:

The second event of the day – the Veloce Esports Not the… Azerbaijan GP – had James Baldwin on pole in the first of two races, the latter of which was to be run with the reversed-grid format.

Baldwin (Mercedes) led into turn one and for the majority of the race, stayed out front. By the time they crossed the line, though, Williams driver Cem Bolukbasi had snatched the lead, and he led Baldwin to the chequered flag.

Youtuber Benjamin Daly (McLaren) came third ahead of Racing Point’s Dave Gaming and Jimmy Broadbent as Nicholas Latifi was seventh with Lando Norris and Charles Leclerc retired. Unfortunately, due to the F1 servers shutting down temporarily, the reverse grid never saw the light of day.

Here’s where you can watch it in full: https://www.twitch.tv/veloce_esports