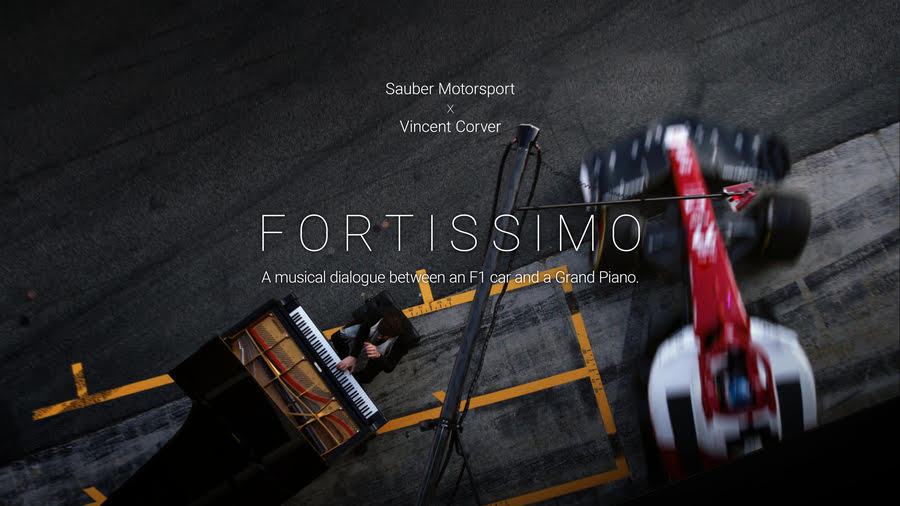 To celebrate a good season where they managed to finish sixth ahead of Aston Martin in the final race, Alfa Romeo collaborated with acclaimed pianist Corver who created a musical composition titled ‘Fortissimo’ using the components of C42 F1 car.

Shot during the filming day at Barcelona, Corver was inside the Alfa Romeo garage with the Steinway Grand Piano, as they used C42’s engine along with the sounds made by mechanics using the garage equipment to create a symphony.

They term it as a dialogue between the car and piano. An avid F1 fan Corver released the music with a live performance at the Hinwil base in front the people working who were also part of the music video along with drivers Valtteri Bottas and Zhou Guanyu.

“Formula One has a global reach and our team has experienced a surge in interest from fields far from our traditional audiences,” said Frederic Vasseur. “It is an opportunity to reach out to new worlds, and we loved working with Vincent on this project.

“His vision for a dialogue between the car and the piano is something never done before like this, and the way he incorporated the sounds of our C42 and our crew in his music makes us feel part of this project. To us, racing is an art – and now, art has come to racing.”

Meanwhile, Corver added: “I’ve followed Formula One for a long time and Alfa Romeo F1 Team ORLEN is my local team, so I have been dreaming about this collaboration for years. There is an affinity between a Grand Piano and an F1 car: both are highly complex systems in which each part contributes to the whole to create something special.

“Therefore, I knew we could combine these two elements to create something that had never been done before. It has been a long journey, one that brought us together, and it’s exciting to see this beautiful piece of music come to light now.”