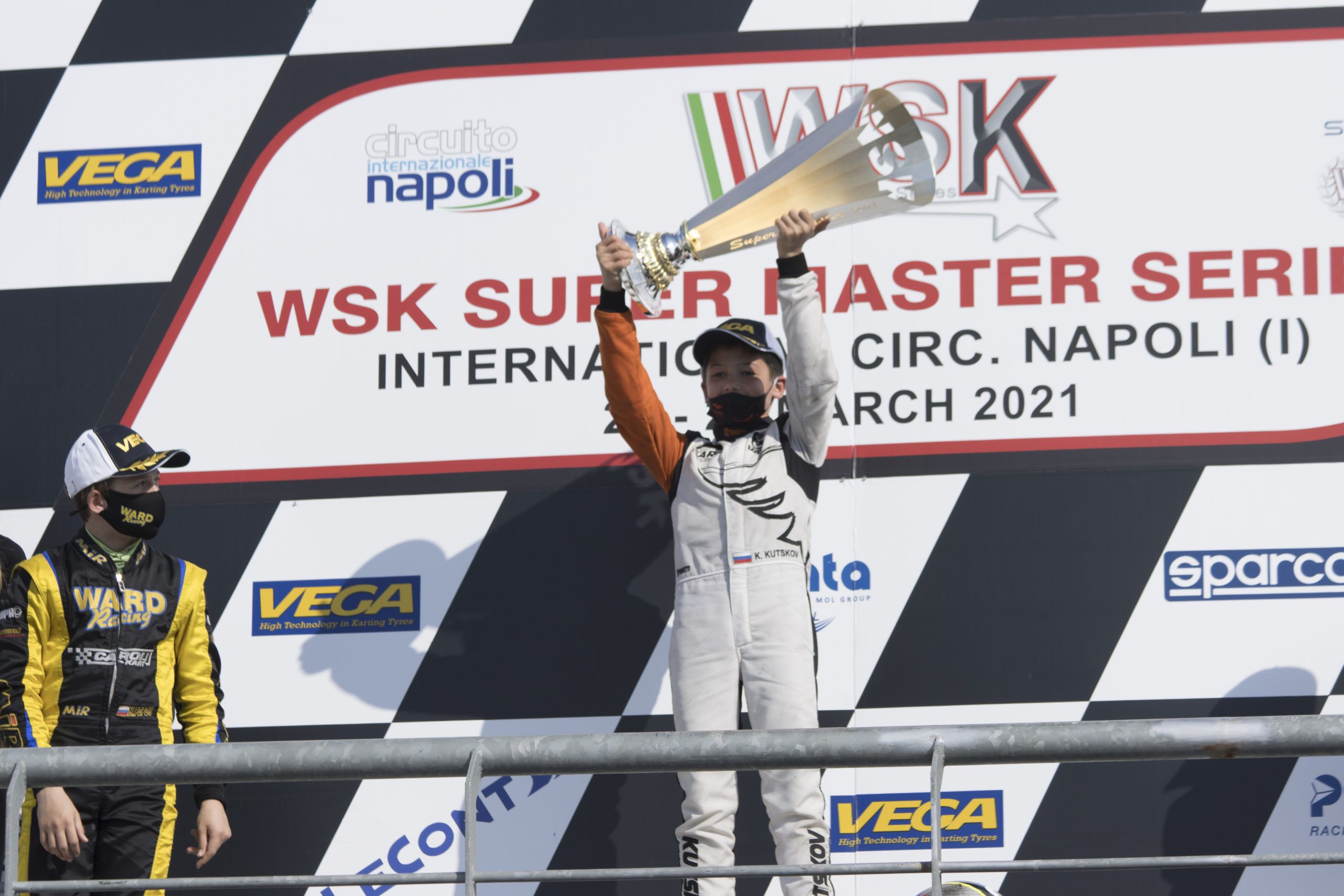 Lively and hard fought finals in Sarno at the third round of the WSK Super Master Series. Kremers won KZ2, Antonelli dominated OK, Kutskov to the fore in OKJ and Olivieri claimed his maiden win in MINI. The fourth and closing race on April 25th in Lonato.

The third round of WSK Super Master Series has been successful both in terms of participation and spectacle. The race was housed by the new 1550 meters long International Circuit Napoli in Sarno (Salerno, ITA) with 271 drivers on track from 47 nations out of the entered 300.

Kremers takes the win in KZ2, Valtanen the lead of the championship

Several twists enlivened KZ2 where, eventually, the Dutch Marijn Kremers (BirelART Racing/BirelART-TM Racing) took the win in an exciting finale after winning Prefinal/B. He led the KR Motorsport pairing made by the Finn Juho Valtanen (KR-TM Racing), who won Prefinal/A, and the Italian Danilo Albanese (KR-Iame).

The Italian Francesco Celenta (Parolin Motorsport/Parolin-TM Racing) and the French Adrien Renaudin (Sodikart/Sodikart-TM Racing) did not finish due to an incident, while other protagonists like the classification leader from Sweden Viktor Gustavsson (Leclerc by Lennox/BirelART-TM Racing) and the Italian Alex Irlando (CRG Racing Team/CRG-TM Racing) were out of the games already in the Prefinal.

Antonelli back to the victory in OK. Camara keeps the lead

Andrea Kimi Antonelli (KR Motorsport/KR-Iame) was back to the victory in a WSK event after winning last year the WSK Euro Series.

The Italian driver has been perfect both in Prefinal-A and in the Final, dominating the two races from lights to flag, while his teammate from Brazil Rafael Camara won Prefinal-B, but then was relegated from P2 to P4 by a 3s time penalty in the Final, a result that allowed him to retain the classification lead. The other two podium positions went therefore to the Finn Tuukka Taponen (Tony Kart Racing Team/Tony Kart-Vortex) and the Russian Artem Severiukhin (Ward Racing/Tony Kart-Vortex). The Czech driver Igor Cepil (KR Motorsport/KR-Iame) was fifth instead.

Russian drivers have been shining in OK-Junior after the Japanese Kean Nakamura Berta (Forza Racing/Exprit-TM Racing) and the French Enzo Deligny (Parolin Motorsport/Parolin-TM Racing) had the upper hand in the two Prefinals. The Russian Kirill Kutskov (KR Motorsport/KR-Iame) and his fellow-countryman Maksimilian Popov (Ward Racing/Tony Kart-Vortex) bounced back in the Final dominating it.

The third place went to Singapore’s Akshay Bohra (KR Motorsport/KR-Iame) who led the Belgian teammate Douwe Dedecker. Dedecker ended fifth winning the sprint to the line with the other KR Motorsport, the Jamaican Alex Powell, who confirmed his classification lead.

Maiden win for Olivieri in MINI. The championship still in Costoya’s hands.

The MINI Final has been uncertain and hard fought. This time the victory went to the young Italian Emanuele Olivieri (Formula K Serafini/IPK-TM Racing), who claimed his maiden win in a WSK event. Olivieri pipped the Czech Jindrich Pesl (Baby Race/Parolin-Iame) and the Brit Lewis Wherrell (Team Driver/KR-Iame) in the brand-new Sarno layout.

The Dutch René Lammers (Baby Race/Parolin-Iame) was among the quickest and slipped down to P4 in the closing stages, while the French Jimmy Helias (Tony Kart Racing Team/Tony Kart-Vortex) was fifth.

The classification is still sub-judice due to the appeal to the decision to exclude Helias from qualifying early into the weekend. The Spanish classification leader Christian Costoya (Parolin Motorsport/Parolin-TM Racing) was eighth after winning Prefinal-A and leading the central part of the Final.