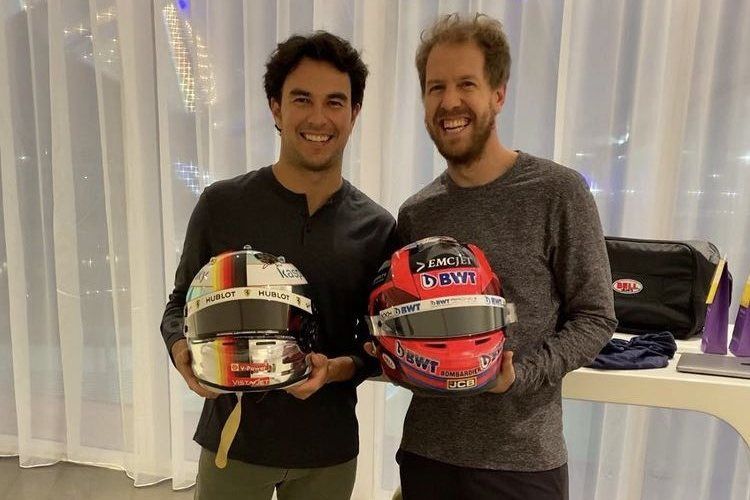 Sebastian Vettel and Sergio Perez respond to Ross Brawn’s comments on the former replacing the latter at Aston Martin in 2021.

“His replacement Vettel I’m sure will come back stronger, as he’s in a bit of a trough at the moment, but Checo is a guaranteed deal. So that’ll be interesting to see how that develops. In a way, Seb has some fairly big shoes to fill now, even if he’s a world champion,” Brawn had said in the wake of the Sakhir GP – a race won by Perez in shock circumstances.

Vettel was announced as Perez’s replacement in September, the German pushing the Mexican out of his team of seven years after one of the latter’s strongest seasons in F1, wherein he laid claim to an impressive fourth place in the drivers’ championship, earning a win and one further podium along the way.

Vettel, a four-time champion, has struggled in the past two seasons at Ferrari, albeit vastly more so in 2020 than in 2019, when some better luck would have swung the season in his favor in Ferrari’s intra-team fight.

However, there is anticipation that at a new team for the first time in six seasons, Vettel can perform; perhaps even so to the level that he has in the past. The German expects that he will take some time to get acclimated to the team, but suspects his many years of experience should help him in this process of assuming Perez’s unofficial role as a team leader.

“I’m very much looking forward to join the team,” Vettel tells media including F1, Motorsport Network, Racefans.net, BBC, AMuS and more. “I think there’s plenty of reasons why I’m looking forward [to the move]. And I’m happy to help and obviously Checo has been with the team for seven years. I think he knows the place inside out, it will be difficult to get up to speed straight away. But I’m also this is not my first year.

“So I think I have also a little bit of experience that should help. But happy to contribute as much as I can to help the team grow. I think that’s the exciting bit, and I’m seeing it as a chance, rather than putting pressure on it from the start,” Vettel said. The German will be formally unveiling in his new colours sometime in February.

Perez was flattered to have been held to such a high regard so as to be considered a challenging driver to match – even by a four-time champion, also saying that Vettel is entering a promising organisation. “I actually saw those comments and I thought big shoes to fill for a four time world champion is hard to imagine, versus a guy who just won a race.

“But in a way that’s that’s Formula One, titles and victories don’t mean a lot, because it’s so much down to the level of cars that you have in your career. But I think Seb has definitely taken a great decision. He’s coming to a team of pure racers, to a team that he will definitely have a good time and he will enjoy it. And then most importantly, he’ll have some good fun. And then I have no doubt that the team will be one of the strongest in next year. So he will definitely have a fantastic car,” said Perez.

The 30-year-old, due to turn 31 this month, was confirmed at Red Bull in December, his race win understood to have been a factor in the British team’s decision to hire him as a replacement for Alexander Albon, whose lackluster performances left something to be desired. It will be Perez’s first opportunity at a title-challenging team in his career.