The newly-renamed Oracle Red Bull Racing team are full of hope that they can in fact build on their success last season, and retain their drivers’ title with Max Verstappen.

Reigning drivers’ champion Verstappen continues for his sixth full season at the team, with Sergio Perez staying on for a second season at the squad. Team Principal Christian Horner is absolutely determined for the Dutchman to be the one to retain the drivers’ title for Red Bull, not publicly contemplating the idea of the Mexican being able to come close to the opportunity or give the Dutchman a run for his money at the team.

He also believes the challenges of adapting to a ruleset that some equate to as an entirely clean sheet of paper can be overcome by the team’s “sky-high” motivation. “Our challenge is now to build on [2021], the reason we have that number 1 on the car is to keep it on the car and defend that title with Max, which with a brand new set of regulations is going to be incredibly difficult – we have massive competition out there but motivation is sky-high and we’re riding on the crest of a wave from last year,” beamed Horner.

“You can always learn, you’re always improving and you can always learn from previous experience but of course with a complete new set of regulations it’s going to be all about the development, how quickly the teams get on top of this set of new regulations – the biggest regulation change for probably 30 to 40 years in Formula 1 – so development’s going to be thick and fast and of course with the cost cap it’s got to be efficient.

“We’re aiming very much to build on what we achieved last year so the target is obviously to try and retain the title and the big unknown is have we missed something with these regulations, has another team stolen a march because of the focus and effort that went into 2021. We believe we’ve got a good car, the RB18 is coming to life and seeing it today is fantastic. It’s a culmination of a huge effort from the team and I’m looking forward to seeing it out on track in anger,” summed up Horner.

When asked about his early expectations of the new season, Verstappen confessed that he’s “looking forward” to seeing how the car handles, after a “good bit of time off to recharge”, but reiterates the need to adapt fast.

“A lot is unknown about the car but personally I feel good,” started Verstappen. “What is important is that you prepare yourself in the best way possible physically but in terms of the car you don’t know so that’s why I’m also very curious to see how the car is behaving on track. It’s not like you just jump in and it’s an upgrade from last year so that is going to be the biggest adaptation.”

He went on to give an insight into a significant challenge of the new cars that all drivers will have to overcome and adapt to. “[In the simulator] I haven’t really driven it too much but for me actually the biggest thing is just the view in the cockpit with these big tyres, to hit an apex in some tight corners is a bit more difficult,” said Verstappen.

“On the driving it feels like the car has a bit less grip but you will get used to that. That’s why we have the practice days so you can get used to the sliding and locking.” In the closing moments of Red Bull’s RB18 launch, Horner emphasised the ever-shifting technical nature of a modern Formula 1 car, and how the tightened financial regulations will impact this development.

“The car is a prototype and basically at every race it’s evolving it’ll’ probably never run in the same configuration twice so it’s just constantly evolving now we have to do that within a framework of the financial regulations,” said Horner. “We’ve got to be really choosy on where we are going to spend our money to develop this car this year.”

Here’s updated entry list with #1 against the name of Verstappen: 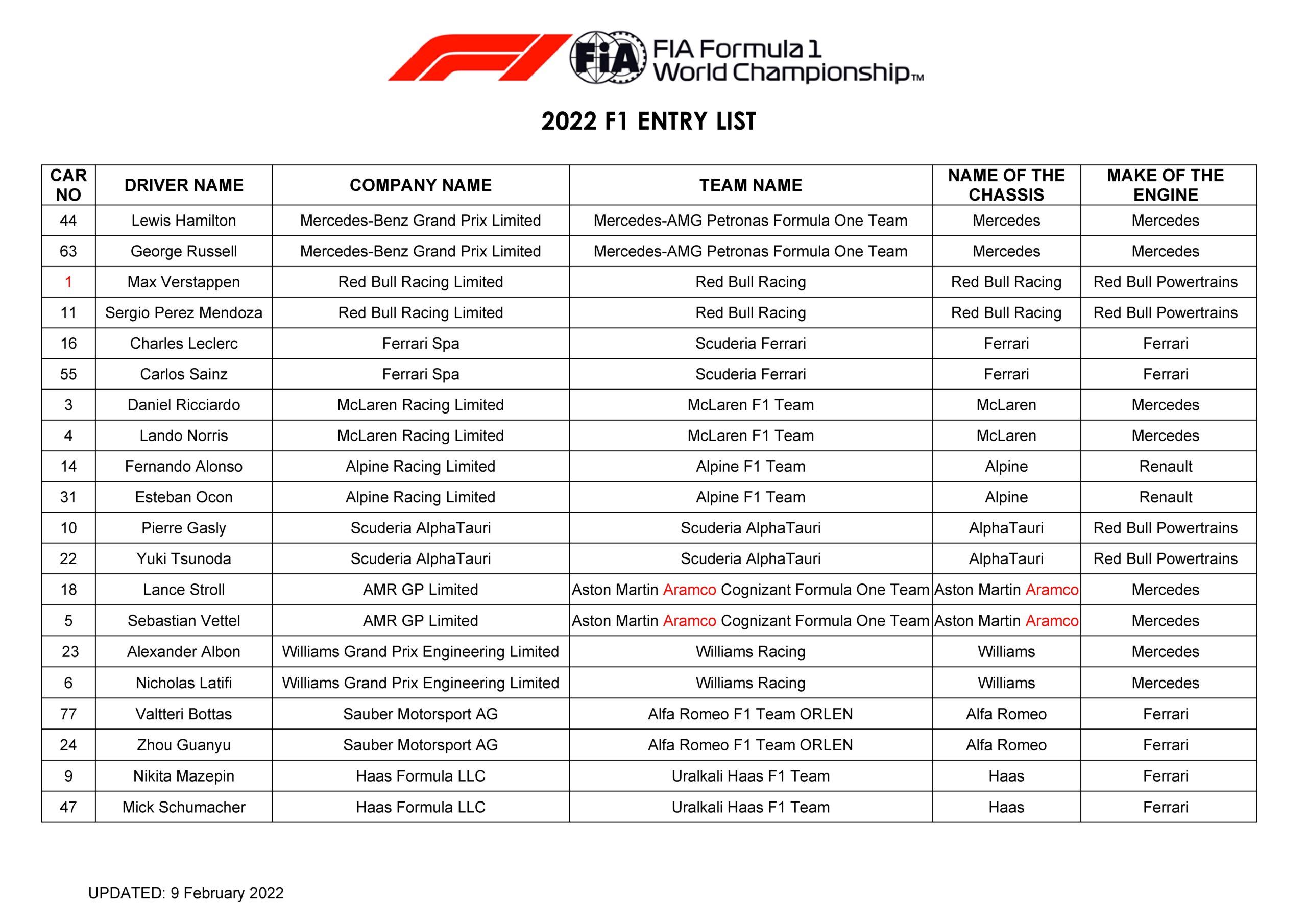