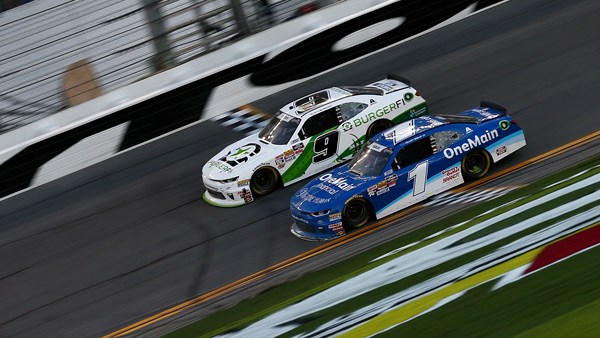 The opening round of the NASCAR Xfinity Series season, held in Daytona International Speedway the day before the legendary Daytona 500, Cup Series season opener; has had a historic end on which, after five overtime caution periods, Tyler Reddick has beaten his team mate Elliot Sadler by the tightest margin ever.

Despite not being the main NASCAR series nor the main event held in Daytona this weekend, the Xfinity Series’ Daytona 300 has not failed to deliver a great show and there has been a historical race with five overtime caution periods and 23 extra laps to end the race under green flag.

Elliot Sadler, who finished second, spun in the backstretch on lap 118 of 120, which caused that the race extended for more distance than scheduled. The JR Motorsports driver had been previously penalised and was on 32nd place after his incident, but the race was far from over.

Returning to green on lap 122, there was a massive pile-up, with 18-cars involved including drivers like Joey Logano and Kyle Larson, who had been on the lead grup for almost the entire race.

The race restarted one more time on lap 130, with Ryan Reed leading, but Spencer Gallagher hit Ross Christian, ending any option to finish the race without another yellow.

On the third overtime restart, Ryan Truex was on the lead, but he got passed by Tyler Reddick, who was just some metres away from crossing the line with the white flag (which would have marked the beginning of the last lap of the race even if there were more incidents) when the Caution waved again.

The last yellow was caused by Dylan Lupton, who hit the wall heavily on the backstretch. Once the green flag flew after this incident, the race could finally come to an end. Reddick led, but his team mate Sadler got to the start/finish straight with more momentum and took the lead. Reddick could push at the very end and they crossed the line at the same time, literally.

After reviewing the video, the win was given to Reddick, who takes his second series race win. The gap between him and Sadler was 0.000 seconds, the tightest margin ever in any NASCAR series. Reed finished in third position.

And that is the end of NASCAR Xfinity’s Daytona 300, the most prestigious event of the season. The chamionship, which is now obviously led by Reddick, will be back next week in Atlanta.