Home F1 Tsunoda/Stroll, Schumacher/Raikkonen speak on their tangle in Brazil 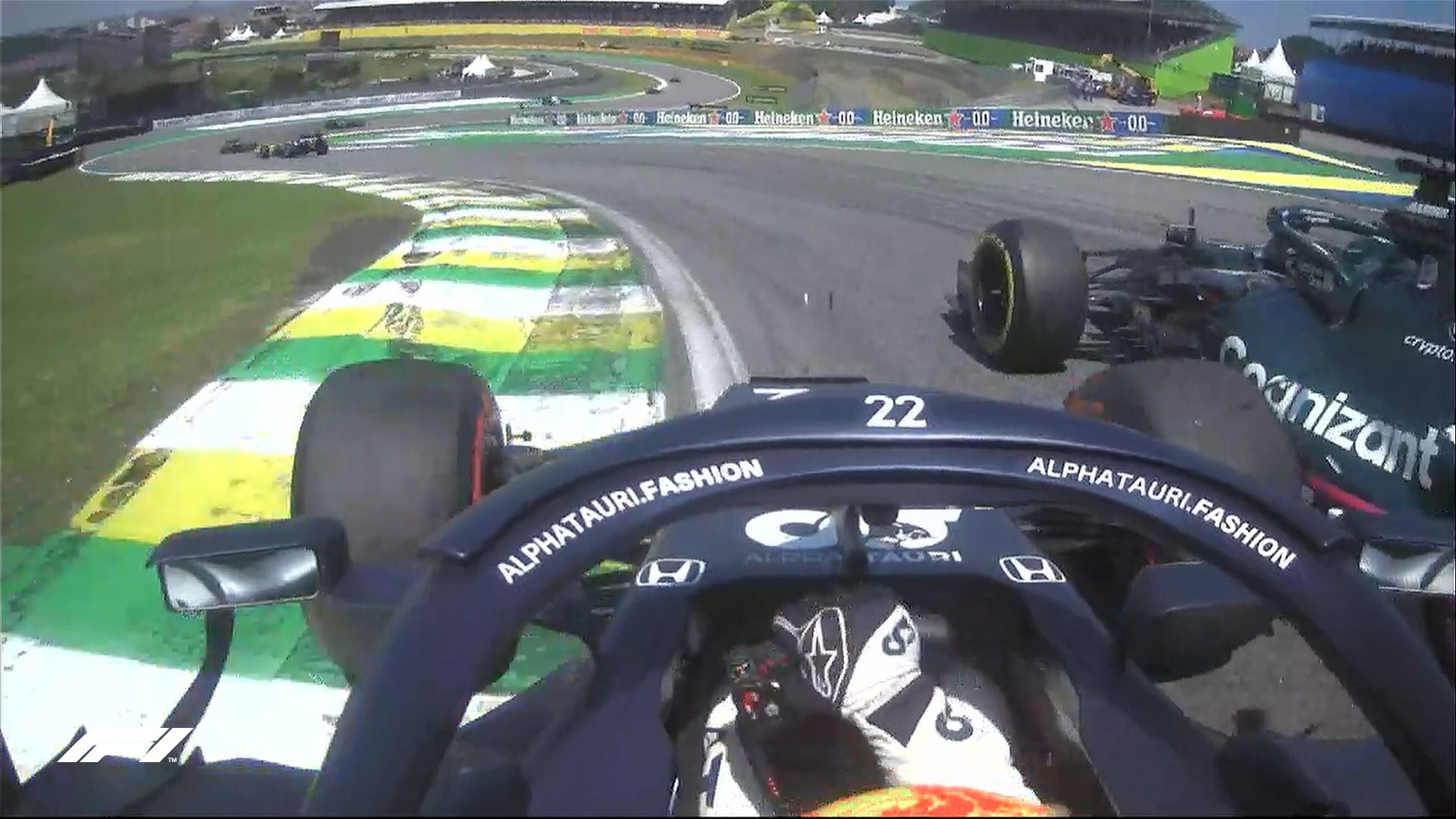 Yuki Tsunoda and Lance Stroll along with Mick Schumacher and Kimi Raikkonen speak up on their separate tangles in F1 Sao Paulo GP.

The two separate collisions happened not far off from each other and at the same corner on different laps in F1 Sao Paulo GP. One saw a penalty to one driver, while the other was deemed as a racing incident but it didn’t help anyone in overall context.

Starting with the AlphaTauri’s Tsunoda and Aston Martin’s Stroll run-in, the Japanese tried a move on the inside at Turn 1 in a space that looked less as he went over the kerb even. They were side-by-side into the corner with the Canadian marginally ahead.

As he turned in, Tsunoda did not have anywhere to go and he lost his front wing in the process. That set him back as he was handed a 10s time penalty – one of the hardest penalties where the stewards blamed him wholly – but he wasn’t convinced.

“So, it’s a shame, the move was there, I mean it was fine. It was a shame. 10-second penalty is absolutely, I mean… okay, five-seconds would still be harsh but okay, but 10 seconds is really ridiculous for me. But it is what it is and I have to improve next time,” summed up Tsunoda, who finished 15th eventually.

But Stroll didn’t make it to the end as the damage only made it worse for him. He felt the move from Tsunoda was desperate as he was trying to gain places on his soft tyre strategy. “It was just getting worse, started off with like 25 points of downforce lost, then 45 points and pieces were just falling off the car and we were just going backwards.

“He started on softs, he’s got a really quick car, in the first couple of laps he was going to be super quick, I think he’s off the pace and was super desperate to make a move and was just too far back. I don’t know what he was doing, I guess he was just desperate and way too optimistic,” summed up Stroll.

“Car 22 was slipstreaming car 18 along the front straight and was considerably faster on the inside at turn 1. However, he braked too late and collided with car 18 in this optimistic manoeuvre. The Stewards find him wholly at fault,” stated the stewards’ report.

The resulting debris required a safety car situation, which gave way to the incident between Haas’ Schumacher and Alfa Romeo’s Raikkonen. The re-start saw the Finn try a move on the German at the same corner and in the hurry, he made contact with him.

Schumacher lost his front wing as a VSC was deployed. The German was on the inside with the Finn on the outside when they touched at Turn 1, having his second clash in the weekend after his run-in with Antonio Giovinazzi in sprint qualifying.

It also came after both talked about not racing each other as much when seated together in the pre-race press conference. “We were battling Kimi and we were joking about it in the press conference,” said Schumacher. “It’s unfortunate that we got a bit too close but those things happen, especially at that kind of corner where it’s tight.

“I went limping into the pits but after that I think overall, it was a good race. We learn from these things and any battle that I get is really useful. A lot of positives that we can carry away from here and I have to say, I really enjoyed that one.”

Raikkonen, meanwhile, shrugged off the incident. Despite that clash he managed to finish 12th after starting from the pitlane. “The car felt quite nice today, a lot better than at any other time in the weekend: we changed a few things, so we started from the pitlane, but we were able to produce a good recovery drive,” he said.

“We made up eight places, which was probably the most we could do today, but we need points for the championship and we didn’t get them. So, all in all, it was the right decision, but we fell a bit short. The positive is that we had the same good feeling with the car we had in the last few races.”

Here’s the clash between Yuki Tsunoda and Lance Stroll: https://www.formula1.com/en/latest/video.2021-sao-paulo-grand-prix-tsunoda-and-stroll-collide-at-interlagos.1716425125628029095.html

Here’s the clash between Mick Schumacher and Kimi Raikkonen: https://www.formula1.com/en/latest/video.2021-sao-paulo-grand-prix-schumacher-damages-front-wing-with-raeikkoenen-impact.1716425677249355124.html