Home In the Spotlight Toyota retains Evans & Rovanpera for WRC 2022, Ogier/Lappi to share 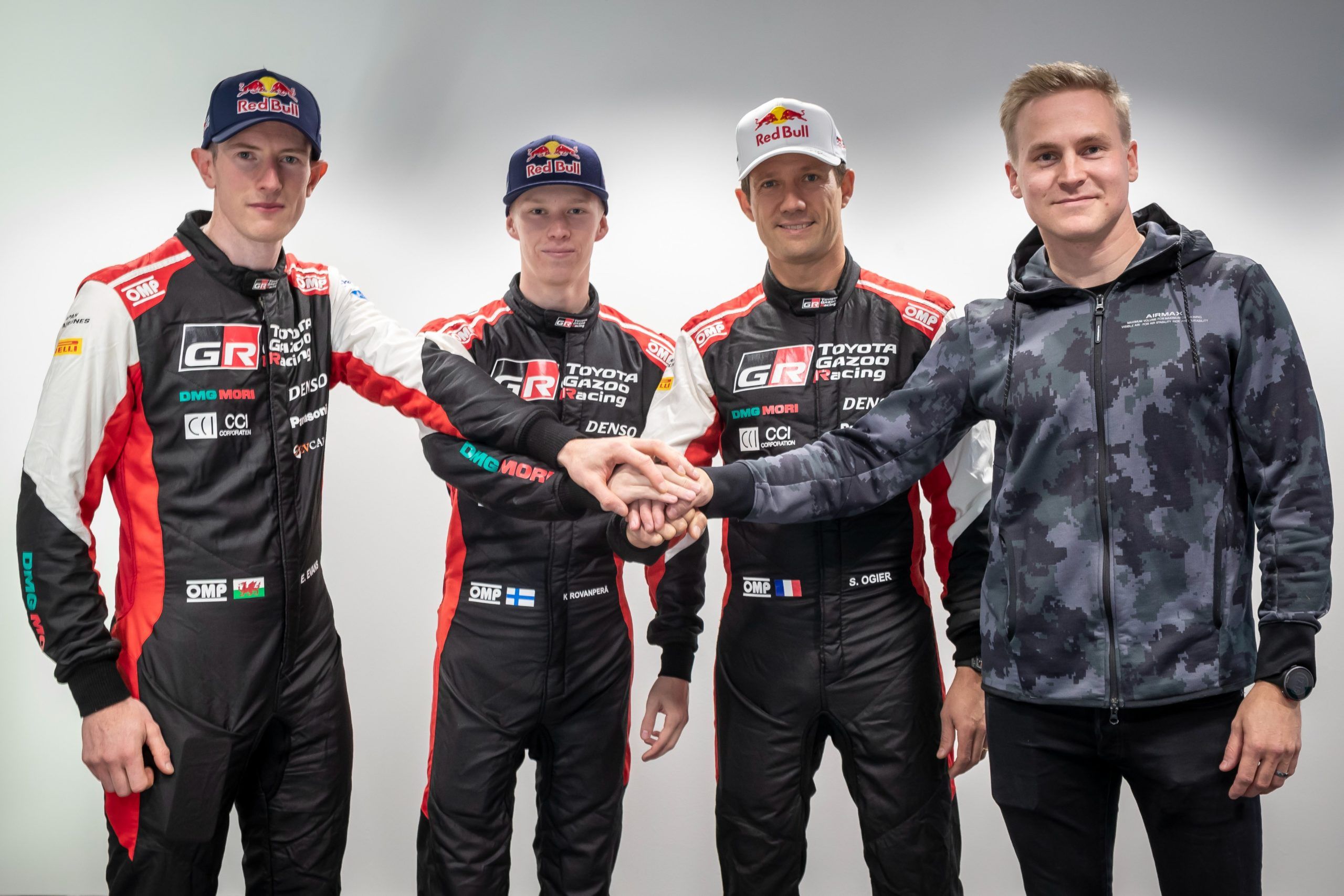 Toyota has retained Elfyn Evans and Kalle Rovanpera in full-time capacity for 2022 FIA WRC season, while Sebastien Ogier and Esapekka Lappi to share the third car.

The TOYOTA GAZOO Racing World Rally Team will enter a new era of the FIA World Rally Championship relying on a strong driver line-up of proven winners across its three full-season manufacturer entries in 2022.

Elfyn Evans and Kalle Rovanperä will contest every event in the new hybrid Rally1 car after signing new contracts with the team, while multiple world champion Sébastien Ogier will also continue to compete for Toyota in selected rounds even as he steps back from full-time rallying. To complete the high-calibre line-up, Esapekka Lappi makes a welcome return to the team to share a car with Ogier during the season.

TOYOTA GAZOO Racing now heads into a crucial phase of development and competition with the new-for-2022 technical regulations knowing it can count on four drivers who have all previously won rallies for the team and helped it towards championship success.

Evans joined the team at the beginning of 2020 and soon proved himself to be a championship contender, claiming wins in Sweden and Turkey and ultimately finishing runner-up to Ogier in a contest that went right down to the final round. After also winning in Portugal earlier this season and then at Rally Finland last weekend, the 32-year-old Welshman and his co-driver Scott Martin remain in contention for this year’s title with two rounds remaining.

Rovanperä has adapted impressively since stepping up to rallying’s highest level with the team last season. The 21-year-old from Finland, co-driven by Jonne Halttunen, recently became the youngest ever winner in the history of the WRC when he claimed a dominant victory at Rally Estonia, and followed that up with an impressive triumph on the Acropolis Rally in Greece, cementing his reputation as the sport’s most exciting young prospect.

Ogier claimed his seventh world championship title in 2020 in his first season driving the Toyota Yaris WRC. Having decided to extend his full-time WRC career for one more year into 2021, the Frenchman, 37, currently leads the standings by 24 points with two rounds remaining after taking victories in Monte Carlo, Croatia, Sardinia and Kenya so far. As he looks to make time for other activities outside of rallying, the exact events that Ogier will contest next season will be determined at a later date.

Julien Ingrassia, who has been alongside Ogier as his co-driver for all of his victories and championships, will bring the curtain down on his hugely-successful career at the end of 2021. Taking his place will be Benjamin Veillas, who has already worked closely with Ogier for several years in tests and as part of his gravel crew on events.

Lappi was part of the team’s line-up in its inaugural season in 2017, and claimed a memorable maiden victory on home soil at Rally Finland in just his fourth start at the highest level. In 2018 his three podium finishes helped Toyota to win the manufacturers’ championship before he moved on to other challenges. Together with co-driver Janne Ferm, the 30-year-old returned behind the wheel of a Toyota Yaris WRC last week with a privateer entry on Rally Finland, finishing a strong fourth overall, and now rejoins the team on a permanent basis for the WRC’s new era.

Jari-Matti Latvala (Team Principal): “I am very happy to have such a strong line-up of drivers heading into 2022 and an exciting new era for the WRC. It’s very nice to have Elfyn and Kalle continuing with us as drivers who can fight for the championship. Elfyn is a really consistent driver, always helping to get the points for the team towards the championship, but as he proved with his victory on Rally Finland, he’s also absolutely one of the fastest drivers and definitely one of the contenders to win the title. We have seen really great performances from Kalle this year. He is developing all the time and as he gains more and more experience, he can also become a strong contender for championships. Seb is a great champion and he will be really valuable for us again next season, even though he will no longer be targeting the drivers’ title for himself. Finally, I’m delighted to bring Esapekka back into the team. He proved with us before that he can win, and since then I think he has been growing a lot. His motivation is very high, and he showed his speed on his return last weekend. I believe he is the perfect driver to share the seat with Seb, to help us in the championship but also be there to fight for victories himself.”

Elfyn Evans: “I’m really pleased to continue driving with the TOYOTA GAZOO Racing team. I have very much enjoyed my time here so far over the past two years, and to win for the team on its home rally in Finland last weekend was an extra-special feeling for me. Now we are getting ready to enter a new phase with new regulations, and I’m excited to work with everyone in the team to do the best job we can in developing the Rally1 car and trying to achieve the best results possible next season. Before then, I’m keen to round off this year on a strong note and help to secure the championship for the team.”

Kalle Rovanperä: “I’m very happy to be staying with TOYOTA GAZOO Racing. My first two years with the team have been really good. I have been learning a lot, and the team has given me the chance to learn and to drive in my own way without big pressure. We have a really major change coming for next year with a totally new car, and it’s going to be a big challenge for the whole team. But it’s really positive to already be familiar with the team when we’re developing the car together and to be able to provide our own ideas as drivers. The team is putting a lot of work into it and I’m excited to help them in the best way possible.”

Sébastien Ogier: “I’m looking forward to having more time with my family after this year, but at the same time I’m very happy to remain with TOYOTA GAZOO Racing and having the chance to compete in some rallies next year. I’m very thankful to the team for giving me this opportunity to keep doing on a partial basis what I love to do. The schedule of events is not clear yet, but I will do my best to help the team in the manufacturers’ championship and to develop the car. I’m excited to see what this new generation of cars bring to the sport and I know the team is putting a lot of effort into it.”

Esapekka Lappi: “I am very, very happy to be returning to the TOYOTA GAZOO Racing team. It feels like I’m coming home. I have some great memories from the past and it was really nice to work with people from the team again at Rally Finland. As soon as I got back into the Yaris WRC, it felt again like this was my car. Of course, for next year we will have a new car and although I have not driven it yet, it seems like it will be very different with the new regulations. But it will be interesting to be a part of it and I’m very excited about the future.”

[Note: The above is as per the press release from Toyota Motorsport]