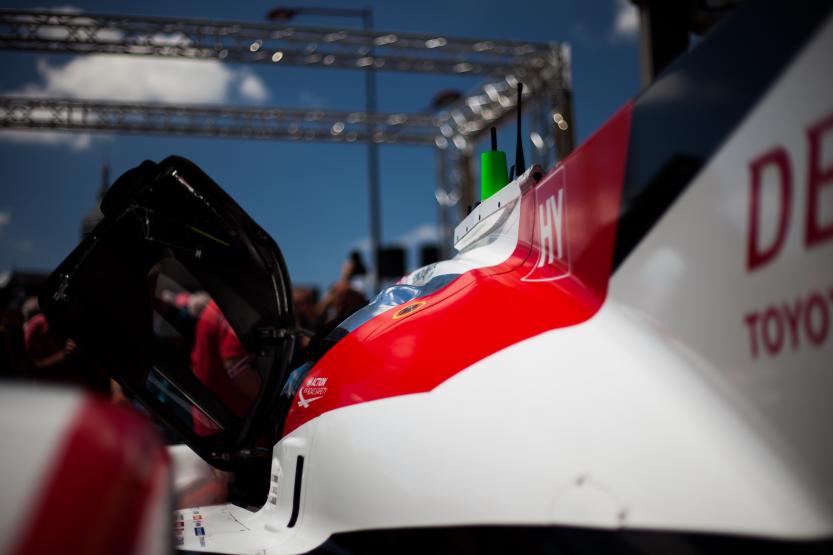 Toyota tonight claimed provisional pole position in the first qualifying session for the weekend’s 24 Hours of Le Mans, round three of the 2017 FIA World Endurance Championship.

Toyota tonight claimed provisional pole position in the first qualifying session for the weekend’s 24 Hours of Le Mans, round three of the 2017 FIA World Endurance Championship.  Kamui Kobayashi set a blistering pace with a fastest lap of 3:18.393 in the No.7 Toyota TS050 HYBRID he shares with Mike Conway and Stéphane Sarrazin.

In a session which started 20 minutes late, following an incident in practice for Road to Le Mans which resulted in track repairs being necessary, four LMP1 hybrid cars dipped below the 3m20s mark.  Track and air temperatures

The No.8 Toyota of Sébastien Buemi took second place (3:19.431), but Kobayashi’s provisional pole time was a full second quicker than the fastest Porsche – the No.2 919 Hybrid of Timo Bernhard.

LMP2 was a closely fought battle from start to finish, and at the chequered flag it was Matthieu Vaxivière of TDS Racing who had claimed the honours for class pole – the Frenchman doing so in his first race back after a foot injury.

Behind TDS Racing, Vaillante Rebellion and CEFC Manor TRS Racing filled the next three places, all separated by 1.6 seconds.  Bruno Senna set the pace in the famous red, blue and white Vaillante colours sported by the No.31, followed by the two Manor entries.

ORECAs and Alpines filled the top 12 places in the LMP2 category.

The second row in the top GTE class will also consist of a Ferrari and an Aston Martin, with the No.51 Ferrari just ahead of the No.97 Aston Martin Vantage.

The Ford GTs appeared to be struggling throughout the practice sessions and most of qualifying, until Andy Priaulx placed the No.67 in 5th place, albeit a second adrift of the provisional pole man.

Another tremendous performance from Pedro Lamy in the No.98 Aston Martin Vantage (Lamy-Paul Dalla Lana-Mathias Lauda) meant that the British marque claimed a GTE double pole.

The Portuguese driver’s fastest lap of 3:55.134 put him ahead of two Ford GTs and Matteo Cairoli from Dempsey-Proton Racing who was second in class.  The No.77 Porsche 911 RSR was half a second behind the Aston Martin, with the next best WEC entry being 6th in class.

Two further qualifying sessions will take place tomorrow, Thursday, between 19h00-21h00 and 22h00-midnight.  Temperatures are expected to be hot and humid like today, but the battles will go on just as fiercely throughout the 60-strong field for pole positions for the 85thrunning of the 24 Hours of Le Mans.