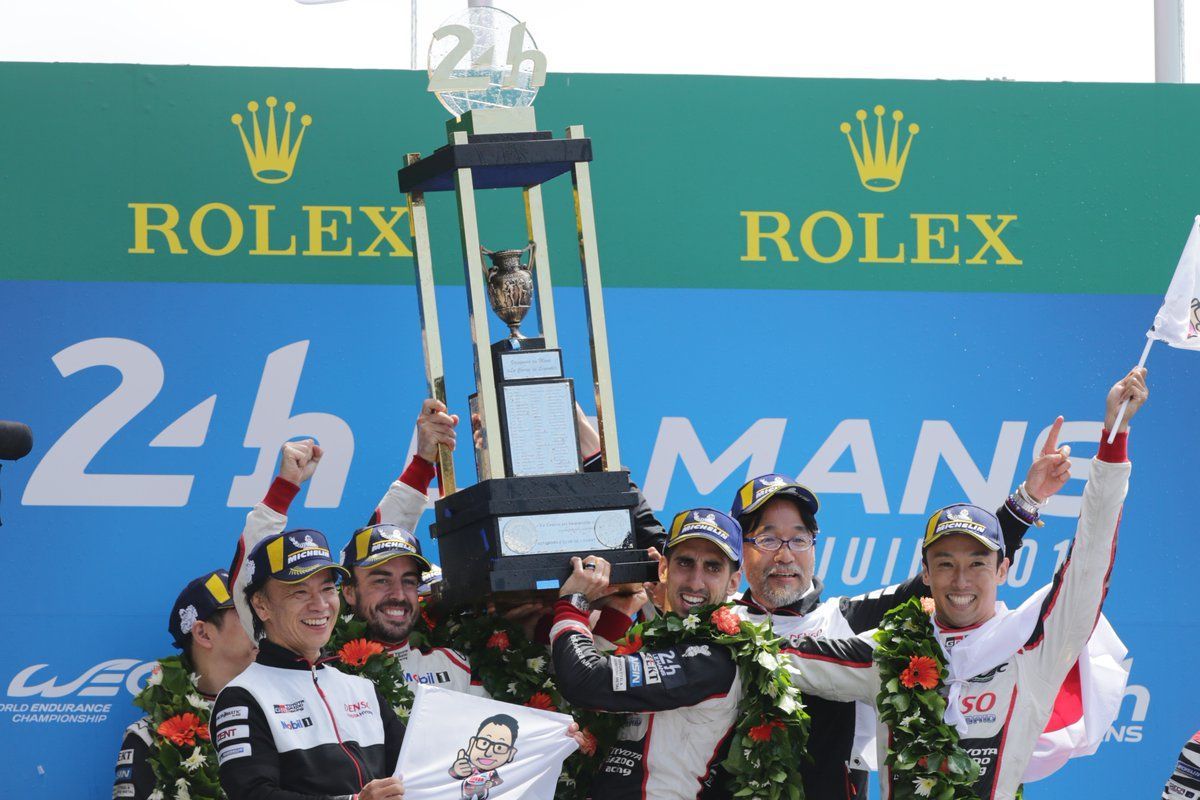 Japanese manufacturer Toyota finally were able to break the Le Mans 24 Hours jinx to win the 2018 edition courtesy of the #8 crew of Kazuki Nakajima, Fernando Alonso and Sebastien Buemi.

With the #7 car of Kamui Kobayashi, Mike Conway and Jose Maria Lopez finishing second, it was a solid 1-2 for Toyota who had to wait for 19 years to finally take its place on the top step of the famed podium

The last time they came agonisingly close was in the 2016 season when the #5 crew of Buemi, Nakajima and Anthony Davidson looked certain to win the race until the last three minutes when the car stopped, handing the victory to Porsche.

After five podium finishes in its Le Mans history, the Japanese manufacturer were able to live the winning dream in 2018. Toyota’s President Akio Toyoda said it was ‘kaizen’ – meaning ‘to continuously improve’ – is what earned them their much-deserved win.

“Thank you for driving all out!” – Please let me direct these words to our drivers, who drove our cars for the longest distance at Le Mans, finally in our 20th challenge,” his statement read. At the same time, I would like to say the same to our cars, completing 388 laps, approximately 5,300 km.

“And ‘thank you very much for letting us and our drivers drive all out!’ I want to say this to all fans who have supported us for a long time, our partners and suppliers who have battled together with us, and all the team members and the people related to our team. I want to express my sincere appreciation to all.

“In our history we never won Le Mans, just watching the rear of our rivals, so we devoted ourselves developing new technology, believing if we make a car that drive faster than theirs, we could win.

“However, we could not win our 19th race last year. After the race, I raised my voice to the team: ‘We can’t win Le Mans if we only care about making a fast car! What we do not have is strength. We are not a strong team!’

“Then, they re-built the operation asking why they didn’t have strength from the ground up, and finally reached the conclusion that what was missing is idea of kaizen, or continuous improvement.

“There is every detailed operation to make and drive a car, and each person needs to consider how to prevent any mistakes. Then they will find out what to do next. They spent the year working on improvement, trying to acquire the “strength”.

“Porsche, who we did not beat, maybe already had such strength. We could not compete with them again this year, but we would like again take this opportunity to show our sincere appreciation to those great rivals.

“Before the race started this year, I received a message from one of the team members. “I feel uneasy this year. We have continued to improve throughout the year, but finally I realized that kaizen is continuous, that it never ends because there is always room for improvement.

“I think that’s why I feel uneasy. We will keep doing our best and continue kaizen with my team members until we get to the chequered flag. Morizo san, please keep supporting us during the race.

“Having read this, I felt that they are getting stronger. So I really wanted to see them win, and decided to fight together with them even though I was in Japan. We are developing a road car from a race car competing in the Le Mans.

“Kaizen is ever-continuing – it is a common idea in Toyota and now racing team members also understand it linked to victory, so I believe that we took one step closer to the realization of the project.

“Finally, we won 24 Hours of Le Mans this year. I want to enjoy the great feeling today with all fans who have supported us for long time. Of course this is another step towards the next challenge so I would like to ask your continuous support from now on too. Thank you very much.”

For the drivers, especially Buemi and Nakajima, it was also a long-long wait as well as they have been looking to get their first Le Mans win since the 2012 season driving the TS030, TS040 and now the TS050 Hybrid.

“It’s great to be here finally; it has been a long time,” said Nakajima. “I am almost speechless. I had great team-mates and Toyota gave us a very strong car. We finished the race without any issue on both cars so I feel we all deserved to win the race.

“To win this race has been a big dream for all of Toyota since 1985. There have been many people involved in this project so I am proud to be here to represent all that effort.” Buemi said he had the 2016 memories in his head in the final stages.

“This is definitely the biggest win of my career,” he said. “I struggle to realise it right now because in the last few laps I couldn’t forget 2016. To finally see the car crossing the line was really special.

“All the preparation that goes into this day from everyone in the team, when you finally win it, it is something really big so I will enjoy this. Congratulations as well to car #7 who did an amazing job as well.”

Alonso added: “It has been amazing. We know how important and iconic Le Mans is in the world of motorsport and as a team we achieved an amazing result. Every moment was a reminder of how tough and long this race is, anything can happen so we tried to execute our race and stay calm.

“Happily everything worked well. The race was hard because the two cars were very close, within one minute after 23 hours, so it was tough competitive but fair and very sporting. We wanted a one-two and we achieved that so I am very happy.”