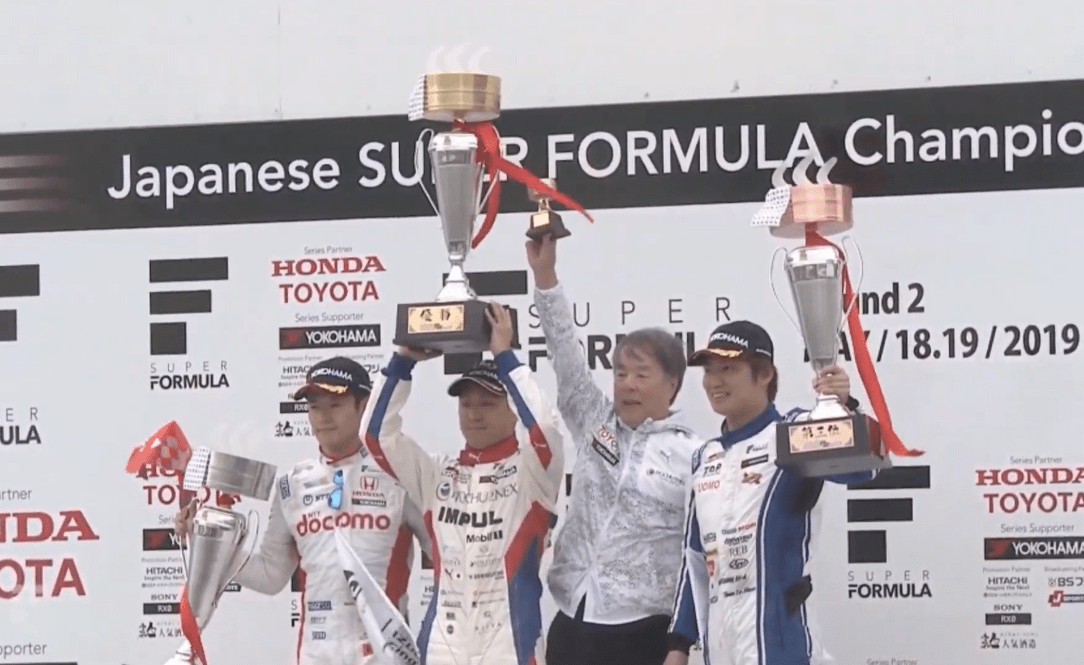 The weather played a key role in Round 2 of Super Formula series at Autopolis as qualifying had to be shifted to Sunday and done in an old-school format as Kondo Racing Toyota’s Yuji Kunimoto took pole ahead of Inging Toyota’s Sho Tsuboi.

While it was wet and slippery for qualifying, the weather got better for the race as Kunimoto started off well from Tsuboi with Dandelion Honda’s Nirei Fukuzumi in third from Team TOM’S’ Toyota Kazuki Nakajima and B-MAx Racing Motopark Honda’s Lucas Auer.

Behind, there was mayhem Auer’s teammate Harrison Newey and Team Mugen Honda’s Tomoki Nojiri stalling on the grid, while his teammate Dan Ticktum spun on his own which resulted in the safety car as flurry of cars pitted to change tyres.

In fact, everyone bar Kunimoto, Team Impul Toyota’s Yuhi Sekguchi and Nakajima Racing Honda’s Tadasuke Makino pitted for a tyre change – the three who started on the soft compound as the order changed with the safety car.

Meanwhile, Team LeMans Toyota’s Artem Markelov was late to join the grid after the Russian’s earlier crashed in qualifying. But he couldn’t go long as a right-front wasn’t attached in a safe manner which forced him into a retirement.

At the re-start, Kunimoto was reeled in bu Sekiguchi as the latter took the race lead at Turn 1 with Makino in third from Inging Toyota’s Hiroaki Ishiura and Kondo Racing Honda’s Kenta Yamashita in the Top 5. Dandelion Honda’s Naoki Yamamoto moved up to sixth.

The reigning champion made more headway as he cleared Yamashita and Ishiura to take fourth as Makino cleared Kunimoto for second. Kunimoto lost out to Yamamoto too as he came under pressure from Ishiura and Team LeMans Toyota Kazuya Oshima.

In fact, Kunimoto led a train of cars with Oshima, Ishiura, Yamashita and Fukuzumi in the points position. At the front, Team Impul calculated it well for Sekiguchi as he pitted on Lap 40 from the lead and managed to come out in from of Yamamoto.

With Sekiguchi pitting, Makino took the race lead but with a pit stop to be done which he did on Lap 51 as Sekiguchi then re-took the race lead and also the win the Super Formula race to open his 2019 points tally in style after retiring from the race at Suzuka.

He gained 15 places to the win, same as Yamamoto in second, who had a measured fighting drive from the back with Oshima coming through the field as well to complete the podium positions as a Toyota-powered car won from a Honda.

Following his late pit stop, Makino did enough to finish fourth – gaining nine places from the start – with Fukuzumi ending up fifth from Nakajima Racing’s Alex Palou, who also made up nine places from his starting position.

The points positions were completed by Yamashita in seventh and Suzuka winner, Team TOM’s’ Nick Cassidy eighth. Missing out on points was Ishiura after his tyres started to degrade towards the end with KCMG Toyota’s Kamui Kobayashi right on his tail.

Red Bull junior Auer was 11th ahead of Tsuboi, who started from the front-row but lost out after his early pit stop. Nakajima was also one to lose places to end up 13th after starting from fourth with Team Impul’s Ryo Hirakawa in 14th.

Having led in the early stages, pole-sitter Kunimito dropped way out of points to finish 16th behind Real Racing Honda’s Koudai Tsukakoshi after his late stop. Newey and Nojiri were classified 17th and 18th but a lap down.