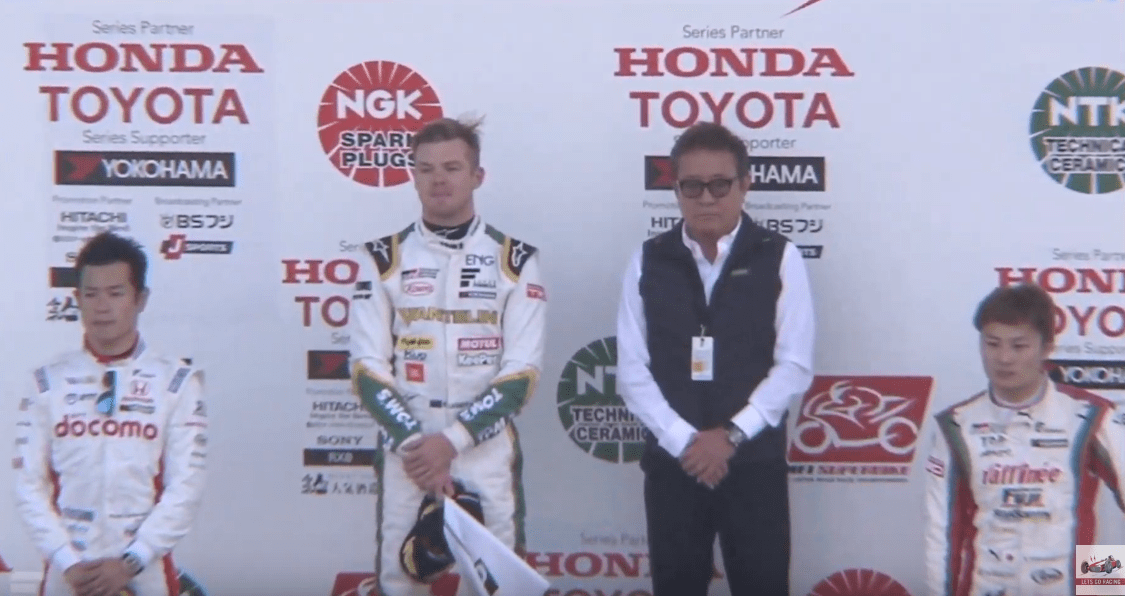 Team Tom’s’ Nick Cassidy had a race to remember as the Kiwi won the 2019 Super Formula opener at Suzuka from 12th on the grid.

The Spaniard almost lost out to Dandelion’s Nirei Fukzumi but hung on. Palou actually came back on Yamamoto to re-take second on Lap 1 in Turn 1 with Fukuzumi dropping to seventh as Team Impul Toyota’s Yuhi Sekiguchi climbed up to fourth.

His teammate Ryo Hirakawa was fifth ahead of Kondo Racing Toyota’s Kenta Yamashita, Fukuzumi and Team Mugen Honda’s Tomoki Nojiri in the points position. At the same time, Red Bull junior and Team Mugen’s Dan Ticktum climbed to 12th after a dismal qualifying.

At the same time, Fukuzumi dropped outside of points as Nojiri was seventh and Team KCMG Toyota’s Kamui Kobayashi moving to eighth. Just as they settled in, Palou had to serve a drive-through penalty for his mechanic staying longer on the grid.

As he served it and came out, the safety car was deployed for a heavy shunt for Real Racing Honda’s Tristain Charpentier at 130R as he smashed into the barrier. Just in front of him was Hirakawa stopped at the same corner in a separate incident.

It was disaster for Team Impul as Hirakawa’s teammate Sekuguchi also retired due to a mechanical issue. The order, meanwhile, shuffled behind the safety car with pit stops for several drivers as Kobayashi led from Kondo Racing’s Yuji Kunimoto in second.

Palou was third with Makino in fourth ahead of one of the earliest stopper Cassidy with Yamamoto in sixth from Nojiri and Inging Toyota’s Hiroaki Ishiura in the points position. With Kobayashi in the lead, Palou moved to second with Cassidy in third.

As they settled in, there was another safety car period after offs for Team Tom’s’ Kazuki Nakajima and Newey on the exit of Degner Curve – the same pair who collided in qualifying on Saturday. This time, however, they went off in separate incidents.

The race re-started with Kobayashi fending off Palou in Turn 1 but the Spaniard ran wide with a suspected issue and eventually stopped on track to retire as Cassidy moved to second and Yamamoto in third. A third safety car was deployed to retrieve the car.

The re-start saw Kobayashi in the lead – with the KCMG driver having not pitted so far – from Cassidy and Yamamoto with positions changing behind. The race settled in on until an off for Makino when his right rear wheel failed at Spoon and he rammed into the barrier.

A fourth safety car was deployed to clear his car. KCMG almost got Kobayashi to pit but he stayed until the final lap of the race in a brave strategy where the Japanese started on the soft compound and ran the entire race on the same set.

It was Cassidy’s race all along after he got into second but he had to wait until the final lap to take the lead and eventually win the 2019 opener at Suzuka – his career’s second Super Formula victory – after starting from 12th on the grid.

Reigning champion Yamamoto ended up second with Yamashita completing the podium position as Nojiri was fourth as he fended off the charge of Team LeMans Toyota’s Kazuya Oshima, who had Inging Toyota’s Sho Tsuboi and Kunimoto on his tail.

The latter also had a late pit stop but managed to claw back to score points as Red Bull junior Auer took the final point in eighth as the Austrian managed to beat fellow junior Ticktum, who was undone in the first pit stop as he lost all the places he gained.

After leading all-through, Kobayashi finished 11th from Team LeMans’ Artem Markelov and Fukuzumi to round out the 12 finishers in the race with Makino, Palou, Ishiura, Nakajima, Newey, Sekiguchi, Hirakawa and Chartpentier in the Super Formula retirement list.

UPDATE: A post-race penalty saw Oshima drop to 12th and last with Ticktum score a point in eighth with Tsuboi moving to fifth, Kunimoto in sixth and Auer seventh. Behind, Kobayashi, Markelov and Fukuzumi were ninth, 10th and 11th respectively.