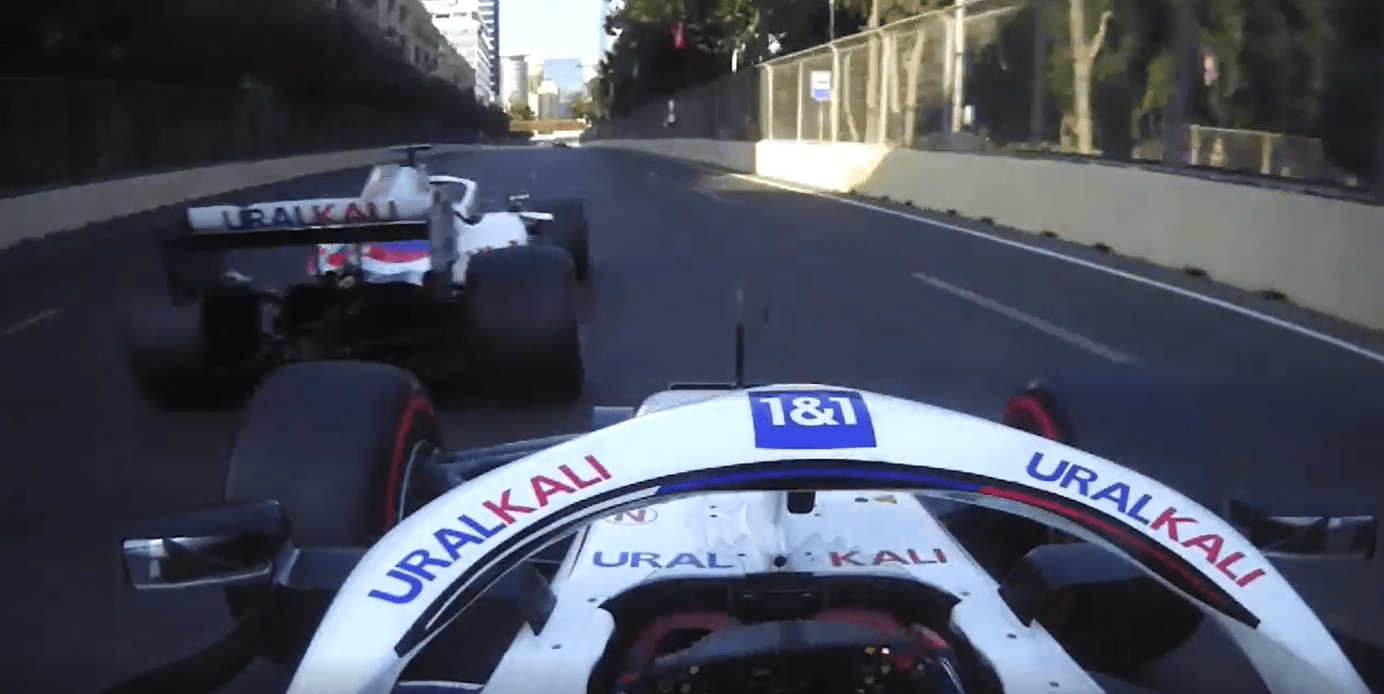 In a frantic finish to F1 Azerbaijan GP, the battle between Haas drivers wasn’t shown on the world feed, where Schumacher just beat Mazepin by 0.074s over the line. The two, starting respectively 17th and 18th on soft tyres, shared the same tyre strategy, stopping at Lap 8 and 9 for the hard compound, respectively.

During the Safety Car period, they opted for an additional pit stop, to return on the soft compound. However, the pit crew had an issue during Schumacher’s pit stop, with an unsafe release due to the left-front tyre being loose.

The pit wall stopped Schumacher before the white line, so that the mechanics could push back the car number 47, and address the issue. “I didn’t notice much. It sounds like the left front tyre had problems,” said the German.

“It all happens so quickly. Mistakes like that can happen. In the end, we managed to get it right again at the second pit stop. It’s also nice of the team to have managed to pull back from this mistake and make amends. From that point of view: all good. We’re fighting back.”

What happened after that was a bit dramatic. The race was red-flagged for Red Bull’s Max Verstappen’s accident on the main straight. Schumacher and Mazepin re-started the race from 16th and 17th on the soft compound, finishing 13th and 14th, registering their best result in their short F1 career so far.

But it wasn’t without a fight. On the run-up to the finish line, Schumacher made a move on teammate Mazepin ahead, who instinctively swerved a bit to his right before retaking his original position. The German got through eventually, but not without a hefty radio call.

“What the fuck was that, honestly?” shouted Schumacher on the radio. “Seriously, does he want to kill us?”, as his engineer noted about the chequered flag and asked him to calm down. Post-race, the German was asked about the overly aggressive, and potentially dangerous, defence from his teammate on the finish line.

In fact, Schumacher played it safe on the re-start, having noticed the tyre smoke from Lewis Hamilton’s lock up. His careful approach on the first corner cost him the position over Mazepin, whom he was trying to get back on the finish line.

“We actually had a pretty good re-start,” said Schumacher. “But then it was quite tricky at the front. I only saw standing tyres and smoke and everything. So I stayed out of it a bit. That’s when I lost the position. We still had two laps to go. So I had time to get the position back. I’ll have to look again at what happened after that. Of course it wasn’t so nice in the car.”

Mazepin, meanwhile, had a slightly different comment on the episode. The Russian driver noted losing the place to his teammate but didn’t speak much on the manoeuvre, rather focusing on his approach on the race, and what he learnt from this race. On the radio, he asked his engineer about not getting sufficient boost from his battery to keep ahead.

“I’m just a little bit upset about losing my position to my teammate on the main straight,” said Mazepin. “It is what it is, but I think our finishing position is a nice number for the team, but obviously some unexpected situations happened with the other drivers which enabled us to get that position. Overall, it’s quite positive

“The race itself was not bad. It was a bit annoying those as certain things made us fall backwards – but pace was there. We were experimenting with something as I had to manage the brakes from the beginning because they were overheating. I had to change my brake bias, and because of the change I was prone to locking. I almost drove into a wall which cost me a lot of time. The race was stop-start and then it came to life again.”

Haas’ team principal Steiner cooled down the heated situation between the two drivers, focusing on the positive result. The Italian stated it was not nice, but the ‘misunderstanding’ was sorted between the two straight after the race.

“Obviously it was an exciting race, on one way or another, or even in all ways,” said Steiner. “In the end we had our best result of the year, which I’m very happy about for everybody. For where we are at the moment it’s very difficult to get this result. Everybody worked really hard and just due to that – it happened.

“Obviously, there was a situation on the straight, that was all resolved, and we’ve cleared the air. There was some misunderstanding, but we’re fine and all moving on from it,” summed up Steiner, as with the result from Schumacher, it helped Haas pip Williams in the standings to ninth, beating George Russell’s best result of 14th.

The move from Mazepin, did seem slightly dangerous, but surprisingly, the FIA Race Director, Michael Masi – at the time of his speaking to media after the race – hadn’t seen the footage. “To be fair, obviously we were looking at the front, so didn’t actually see the incident myself, so I can’t comment on it,” he said. “So I’d prefer not to, not having seen it, and I’ll have a look at it in the fresh light of day and if necessary, I’ll have a chat with the team (Steiner) and the driver (Mazepin/Schumacher) concerned.”