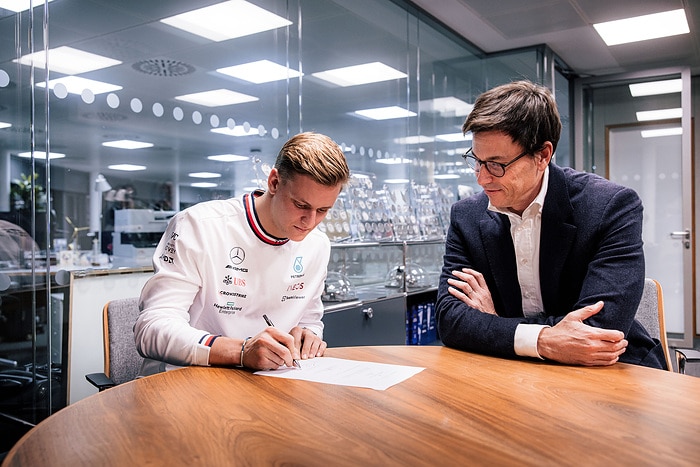 Mick Schumacher has joined Mercedes as its reserve driver for the 2023 F1 season as he is to undertake heavy simulation work.

No sooner than Ferrari confirmed its end of collaboration with Schumacher, Mercedes announced the German as its reserve driver for the 2023 F1 season with the famous surname returning to their fold after being with the Italian manufacturer.

Michael too had a close relationship with both Ferrari and Mercedes in his tenure and Mick is on his way to do the same albeit he is yet to actually drive for the respective teams as a full-time F1 driver. For now, it won’t happen with the former but may with the latter.

Having being speculated to join Mercedes in 2023, it doesn’t comes as a surprise with Schumacher to be involved with simulation work in the development of W14. He will also attend all the races in his new role and will carry out marketing activities too.

“I am thrilled to be part of the Mercedes-AMG PETRONAS F1 Team as their reserve driver for 2023, and I am committed to give it my all to contribute to their performance in this very competitive and professional environment,” said Schumacher.

“I take this as a new start, and I am just excited and grateful to Toto and everybody involved for putting their trust in me. F1 is such a fascinating world, and you never stop learning, so I look forward to absorbing more knowledge and putting in all my efforts for the benefit of the Mercedes team.”

His new boss Toto Wolff stated: “Mick is a talented young driver and we’re delighted to have him join the Team. He is a hard worker, has a calm and methodical approach and is still hungry to learn and improve as a driver.

“These are all important qualities, and we’re excited for him to help us develop the W14. We also know that with two years of experience racing in Formula One under his belt, he will be ready to step into the car at short notice to replace either Lewis or George, should that need arise.”

And Markus Schafer added: “It’s great to have Mick on board. He has already demonstrated impressive talent on the track, and I look forward to watching him apply that to the development side, too. He has a great deal to offer in this important role. We have big plans for 2023 and Mick is integral to those as part of the Mercedes-AMG PETRONAS F1 family.”

Here’s Lewis Hamilton on no attitude change since 2021