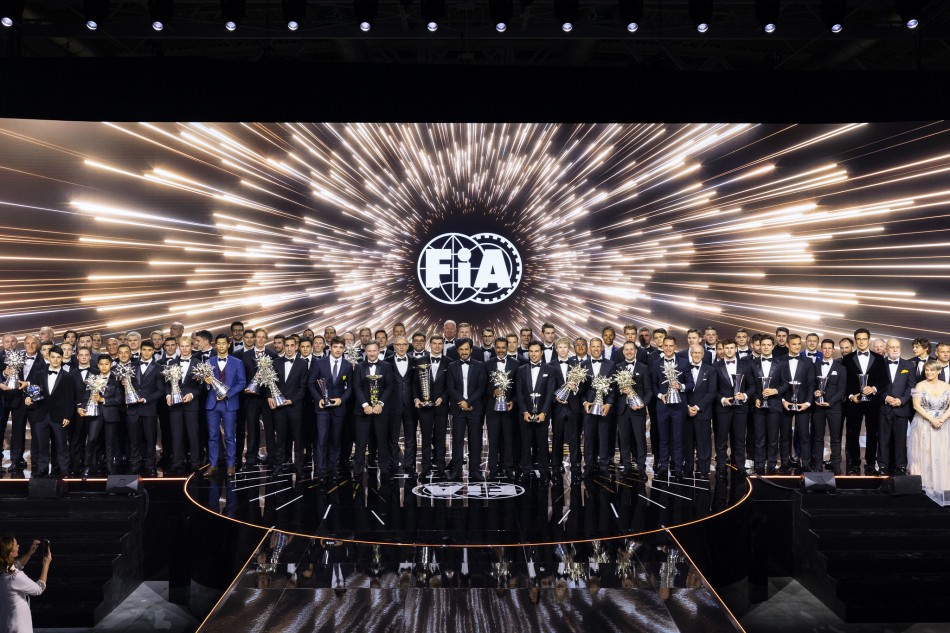 The 2022 FIA Giving Gala had trophy ceremony not only for the champions but the likes of Lewis Hamilton, Zane Maloney and more were rewarded as well.

The 2022 FIA Prize Giving Gala was held in Bologna in Italy this time with most present for the event as the world moves on towards normalcy post COVID-19. Apart from the champions and runners-up getting their trophies, the FIA also had some other special awards, whose recipients were only revealed during the ceremony hosted by Derin Adetosoye and Zoran Filicic.

Much like last year, the event had several champions coming in driving their race cars, with the exception of Formula E’s Stoffel Vandoorne and F1’s Max Verstappen, since it is not easy to start their single-seater machine and it is not safe to do so as well.

The F1 side had Sergio Perez taking his first-ever third place trophy, Charles Leclerc picking up his second place and Verstappen re-taking the winners’. The night had Red Bull’s Christian Horner taking the constructors’ trophy for the first time since 2013, as he dedicated the award to the late Dietrich Mateschitz.

Before the F1 drivers, the night saw champions and runners-up from karting, Cross-Country championship, WRX, WRC, WEC, F3, F2 and Formula E pick up their respective trophies. The 2022 Motorsport Games winning nation Italy too picked up their trophy.

Among the separate awards, the FIA Rookie of the Year went to Maloney – as chosen by the Divers’ Commission – for his good show in his first year in F3 with Trident. Even though he missed out on the title, he did enough to impress everyone including Red Bull who have signed him up in their academy for 2023 as he slated to race in F2 next year.

Moving on to the FIA Action of the Year, it went to Mercedes’ Hamilton for his fine double overtake move against Ferrari’s Leclerc and Red Bull’s Perez at Silverstone in British GP. He was voted as best by the fans as he beat two rally moments in the Top 3.

Previous winners include Fernando Alonso (F1), Kimi Raikkonen (F1), Verstappen (four times, three in F1 and one in F3), Esapekka Lappi (WRC) and Teemu Suninen (WRC). The FIA Personality of the Year award was dropped for 2022 but two relatively new awards were brought up to reward non-racers.

First up was the Outstanding Official of the Year award which was selected by the FIA Volunteers and Officials Commission (VOC), who honoured Mexico’s Filiberto Loranca Marañón for his dedicated service since 1986 in various events in Mexico. In 2022, he was the Clerk of the Course during the Mexico GP.

The second was the FIA President Innovation Medal which Mohammed Ben Sulayem has created to reward people coming with ideas helping not only the sport but also in worldwide context. Long-time F1 designer Gordon Murray was the first recipient of the medal.

“It is an honour that this 2022 edition, my first as FIA President, takes place in Bologna, at the heart of ‘Motor Valley’,” said Sulayem. “It is a city and a region rich in motor sport and automotive history. My warmest thanks to the Automobile Club d’Italia (ACI), Regione Emilia-Romagna and the Italian Trade Agency for hosting us, and to our partners for their support.

“Tonight, we honour the stars of our sport – our World Champions, and I would also like to thank all the manufacturers, teams and promoters who provide such strong support. Most of all, I would like to thank the thousands of volunteers and marshals who freely dedicate their time to ensure the safety and success of events all over the world.

“This year we have taken significant steps forward on regulations and advanced technology, with the debut of the hybrid-powered Rally 1 category in WRC, a second successful year of the Hypercar category in the FIA World Endurance Championship, the dawn of the electric Rallycross era, the launch of the Formula E Gen3 car and approval by the FIA World Motor Sport Council of the 2026 F1 Power Unit Regulations. Across the entire FIA motor sport portfolio, we are promoting environmental sustainability – towards our goal of net-zero by 2030.”