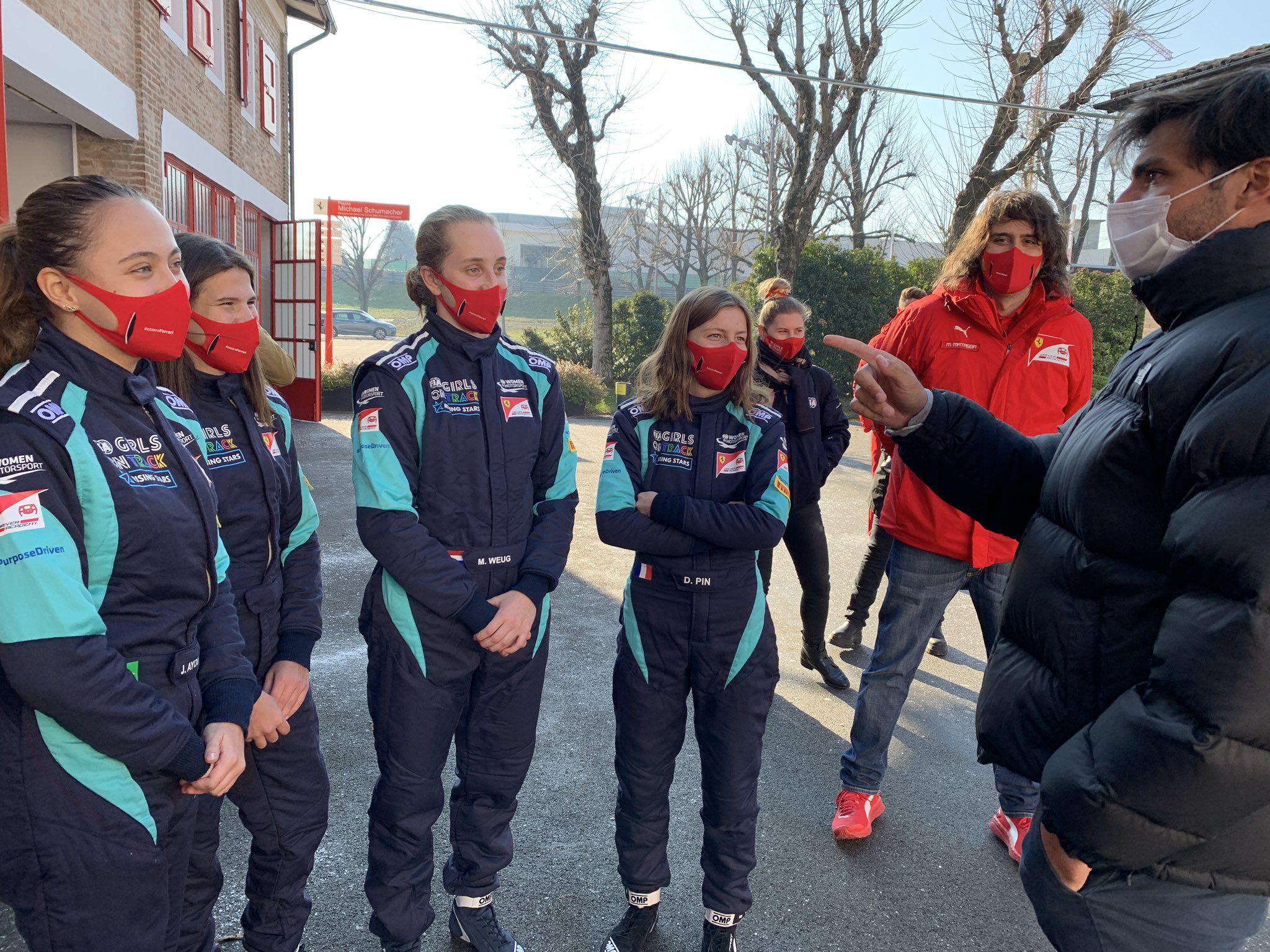 Carlos Sainz visited Maranello to speak with the finalists of the FIA Girls on Track programme, as F1 has announced charity Virtual GP races.

Post his last time at Maranello in 2020 for his first-ever visit, Sainz returned for the first time in 2021, where he took some time out to speak to the four finalists in the FIA Girls on Track programme. They are undergoing off-track learning days before the official run.

The finale was scheduled to take place in November but was forced to be postponed to January after one of the finalists got COVID-19. They have been in Maranello for days already, immersing themselves to the environment at the Ferrari base.

They will have a track run as well, and the winner eventually will get to represent Ferrari in F4 this year, thereby becoming the first-ever female driver to be part of the Italian manufacturer’s academy. The programme will continue every year to find new talents.

After the success of F1 Virtual GP, which helped fans get past the shutdown period due to COVID-19, they are to stage them again albeit in the winter break. It starts on January 31 and will be staged for two more weekends, to be a three-round season.

This time, it will be done for charity, where all the 10 F1 outfits will participate. The grid will be a mix of the ESports drivers, regular racers (current and past) and celebrities. The Pro gamers will undertake a five-lap sprint race to determine the grid for the feature race.

The F1 teams’ duos will then compete at 50% race distance to secure points for the overall standings. The team championship standings will be tracked across the events and will determine how the prize fund is then distributed to their nominated charities.

F1 revealed that over 30 million viewers tuned in to watch the Virtual GP in 2020. It also noted an increase in the viewership of its regular ESports championship, which achieved a total of 11.4 million liver stream views across all of their digital platforms.

It was an increase of 98 percent from 2019. The grand finale where Alfa Romeo’s Jarno Opmeer secured the F1 ESports title achieved 2.7 million digital views – a record number. On social media, there was 1.7 million engagements, another record.

The overall social media impressions was 291 million, which was a 151 percent increase from 2019. The series recorded 23.8 million videos views as well. The participation in qualifiers increased by 117 percent from 2019 at 237k.

Julian Tan, Head of Digital Business Initiatives & Esports at Formula 1 said: “It is fantastic to see the F1 Esports Series 2020 break viewing and engagement records after a brilliant championship where we saw competitive racing and high drama at every event. We had to adapt in the way we operated for this year’s Pro Series due to the pandemic, but we’re thrilled to see that it didn’t affect viewers enjoyment, or consumption, of the action.

“2020 was a tough year for everyone, but we look forward to bringing fans more excitement in 2021, starting with the return of the Virtual Grands Prix as we welcome back some of the faces that made it such a special experience last year, and invite some new ones too, all in the name of charity. Watch this space.”