Home F1 Sainz relieved to miss Albon by whisker; Norris had to switch off... 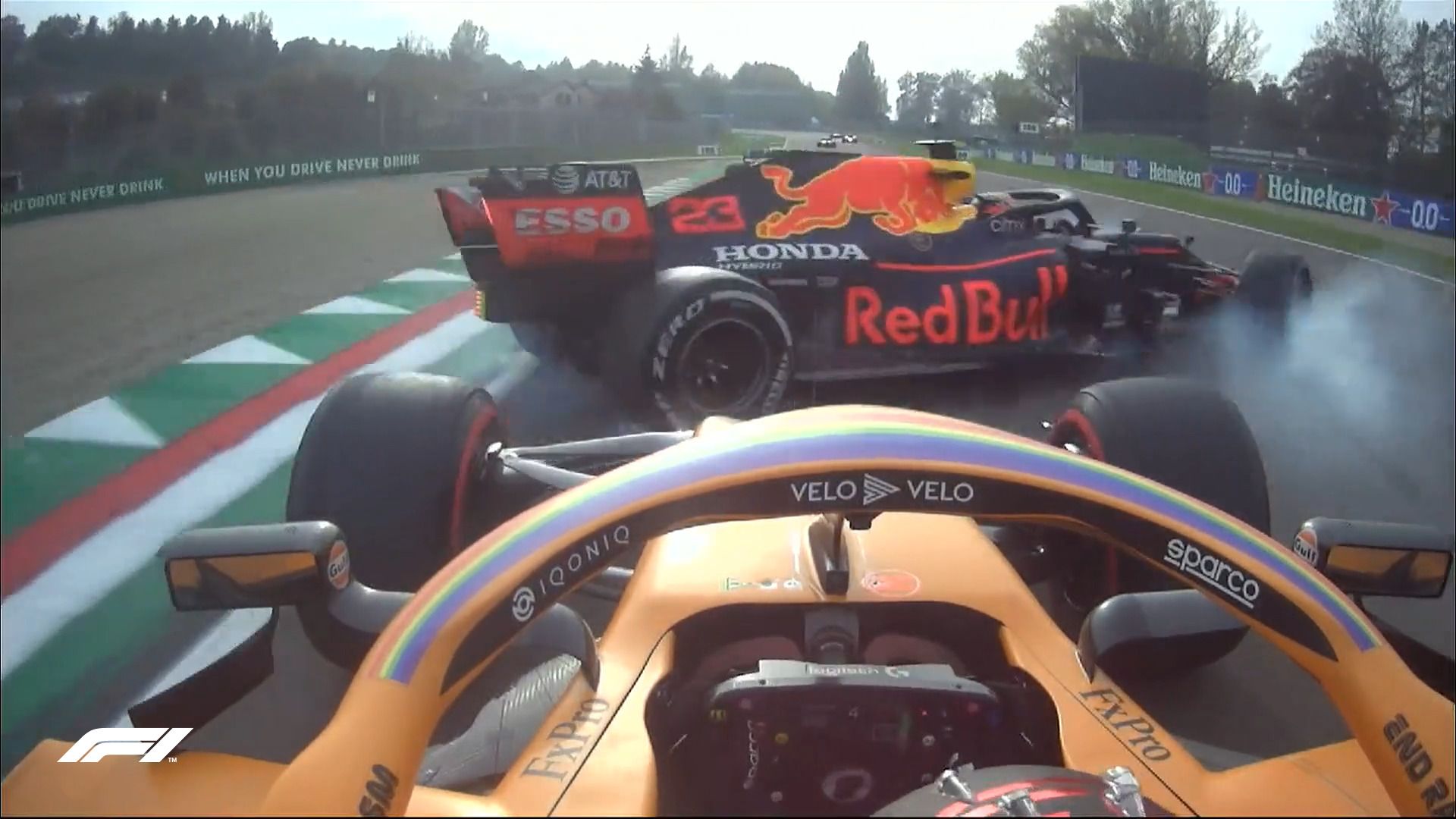 Carlos Sainz was relieved to miss Alexander Albon by a whisker in F1 Emilia Romagna GP as a video shows Lando Norris had to switch off his teammate’s car.

Sainz started F1 Emilia Romagna GP at Imola on a solid note as he made a quick work of McLaren teammate Norris to gain track position, but he then got stuck behind AlphaTauri’s Daniil Kvyat for the rest of the grand prix on a difficult circuit to pass.

He tried to pass him couple of times but it wasn’t to be. The safety car did hand him an opportunity but he couldn’t make the most as he ended up seventh from Norris, leaving McLaren tied at 134 points with Racing Point, one behind Renault (135).

His post safety car charge was hampered slightly by a spin from Red Bull’s Albon into the right-hander, where the Spaniard had to brake hard in split second. “It is a bit of shame because in the race I feel like, we had bit more pace than the rest of the midfield ahead,” said Sainz to TV media.

“Once I passed Lando, I started to catch the midfield and I felt that overtaking wouldn’t be that difficult but as soon as I got within a second of Kvyat, everything stuck as I couldn’t get a move on. P7, we just paid a difficult price for a poor qualifying. We got some decent points but we felt the pace was better then the result.

“It was a very close call with Alex spinning, I had to react very quickly, just smash my brakes and missed him by tiniest of margin, so happy to salvage that,” summed up Sainz. It was a all good for the Spaniard until a moment after the race.

It could have resulted in a penalty for the Spaniard, had Norris not spot it immediately. A small video clip showed Sainz leaving the car and by mistake switching on it again, which was spotted by the British driver as he quickly turned it off.

For Norris, there was nothing more he could do as he lamented difficulty in overtaking. “It was too difficult to overtake,” he said. “Perez couldn’t even overtake Leclerc on the really old tyres, and we were on the softs, so after Portimao, it was just a complete contrast of racing and overtaking. We don’t have enough pace to do something else.

“Even if you’re .3 quicker or .4 quicker than someone else, you just get stuck behind. They just have to defend into turn one and as long as they do that then you’re safe for another lap. Track is too difficult to do something else on, and it makes it a little frustrating and difficult to do anything else.”

While the McLaren drivers seemed satisfied despite not being able to score as well like its rivals, it was disappointment for Albon with no score amid speculations about his F1 future with Red Bull. The Thai racer couldn’t ascertained the reason for his spin.

“It was one of those races where we spent the whole time behind other cars,” said Albon. “There wasn’t much to do there. In hindsight I should have stopped when the others did, and of course we were the first cold-tyre car for them to come across, and it was always going to be difficult to hold them off.

“I think we had contact as well which helped me spin around, and it was just one of those times. If we stopped we could have been looking at a podium but it is what it is. I got told I go hit but that may be wrong. If it wasn’t contact, then it was just cold tyres and lack of downforce.

“I thought a McLaren showed it’s nose but maybe I’m wrong,” summed up Albon, as he noted that he is doing all he can to survive. “I’m already doing that. It’s not like I’m not doing that already. But of course I’m hanging in there, doing everything I can. In retrospect, it was not a bad weekend for me.”