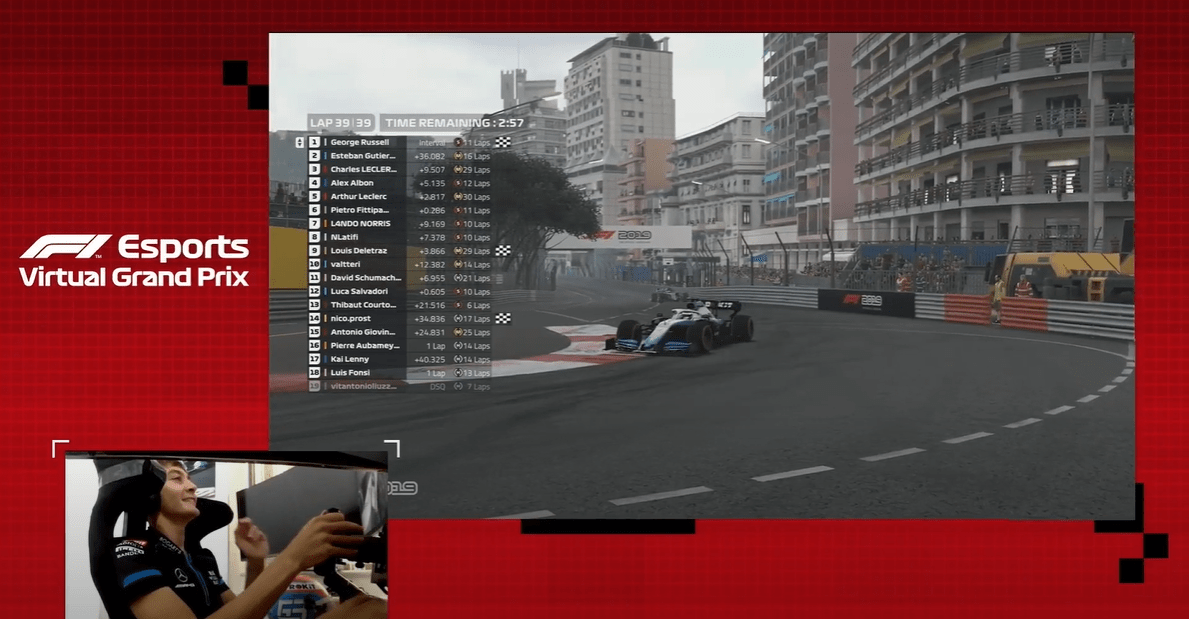 The F1 Virtual Grand Prix (Virtual GP) was back for the Monaco round held at Monte Carlo with George Russell winning for the second time.

The Virtual GP returned for the sixth time for the Monaco round, which was held at the Monte Carlo circuit on the F1 2019 game. There were some changes in the driver line-up too with the current grid of drivers up to eight but they had a former racer in.

It was a wet qualifying for the racers for F1 Monaco Virtual GP as Fittipaldi surprised all taking pole from Russell and Schumacher, with Leclerc in sixth. The race was in dry conditions with no damage on because of the closeness to the wall.

It was a quick work to start the race with Russell leading from A Leclerc, who made up multiple places to be second. Schumacher stayed third but Fittipaldi dropped to fifth with C Leclerc gaining places to be fourth as Giovinazzi spun to disrupt many including Bottas.

It was different strategy being played out and with no damage on, there was a lot more hitting between them but there were penalties galore too. Russell went long and held the lead pretty much throughout the 39-lap F1 Monaco Virtual GP.

Russell eventually made it two in a row after dominating F1 Monaco Virtual GP as the fight for second went down to the wire between Leclerc and Gutierrez. The Mexican had it under control despite the two stops as the Monegasque rounded the podium.

The fight for fourth saw Albon pass A Leclerc on the final lap as pole-sitter Fittipaldi was sixth ahead of Norris, Latifi, Deletraz and Schumacher in the Top 10 – where the latter two finished a lap down. Bottas was 10th on the road but had penalties to drop to 11th.

Salvadori ended up 12th from Courtois, Prost, Giovinazzi (BOT), Aubameyang, Lenny and Fonsi, as Liuzzi as disqualified due to multiple penalties and Ocon never made the start in his first F1 Virtual GP due to technical issues at his end.

Here’s where you can watch it in full: https://www.youtube.com/watch?v=OKvt9yoUL5k

The reverse-grid sprint race was won by A Leclerc after pole-sitter Juan Manuel Correa was demoted to third because of penalties. Second place in this 5-lap competition was occupied by Deletraz, and fourth and fifth by Calan Williams (DAMS) and Callum Illott (UNI-Virtuosi).

Here’s where you can re-watch it full: https://www.youtube.com/watch?v=ZosE89zR9dw

Here’s how Round 5 of F1 Spanish Virtual GP