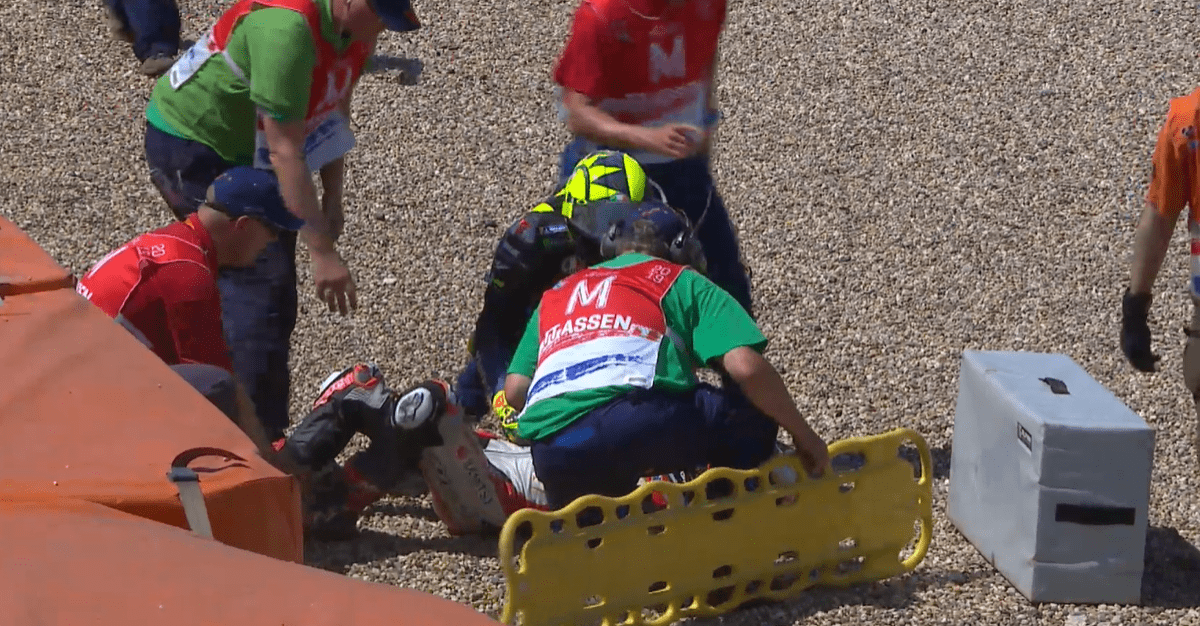 With track limits in play, Rossi was denied a chance for a straight Q2 slot for the Dutch MotoGP race at Assen. It proved to be detrimental as the Italian was only 14th overall for the grand prix while Maverick Vinales had a front-row start.

While Vinales battled at the front, Rossi made inroads in the grand prix to be inside the Top 10 when he found Nakagami in front of him. But as he went for a move on the inside at Turn 8, he lost the front end and crashed out, taking Nakagami with him.

Rossi seemed fine but Nakagami had some pain, although there was no major injuries. It could have been a big result for Rossi, especially with Vinales scoring the first MotoGP win of 2019 for Yamaha. The Italian, however, was apologetic for the crash.

“I was fighting with Nakagami and I tried to overtake him at the entrance of Turn 8, but maybe I was little bit to much out of the line, so when I was entering the corner, I lost the front,” said Rossi to MotoGP website. “Unfortunately, I also took out Nakagami.

“So, it is my mistake and I have to say sorry. Fortunately, I am OK and I know that Taka is also OK and it is not so bad. This is important and I am very sorry. It is a great shame because I was better in the race as this weekend has been very difficult for us.

“I was always very slow as I was suffering too much. Here in Assen, it is a track where usually, I am fast. We modified something on the bike and looks like we found some solution. In the race, I felt good and I was strong.

“I recovered from behind because during the weekend I was also unlucky. I touched the green in practice and I didn’t get the chance in Q2, so everything became more difficult. But at the same time, we see something positive because I felt good in the race.

“This is very important and we hope to be competitive in Sachsenring.” Meanwhile, Nakagami took the incident calmly despite hitting the fence, having gone through the gravel in a quick time. “It was an unlucky day,” said Nakagami.

“We made a good start at the beginning and I tried to follow the top group. Then I was fighting with Cal, Jack and Valentino, and on that lap Rossi overtook me in Turn 1 and I overtook again in Turn 2, then in Turn 8 he tried to overtake again from inside.

“But I saw him lose the front end and I had no time to recover and he took me out. It was an unlucky crash, but although I’m not 100 percent OK, I’ve not got any injuries which is good as it was a nasty crash. I hit the fence.

“I can’t completely remember what happened, but I want to thank you to all my staff for helping me.” The Japanese rider has had a good season so far despite being on the old-spec 2018 Honda with 48 points from the eight MotoGP races so far.