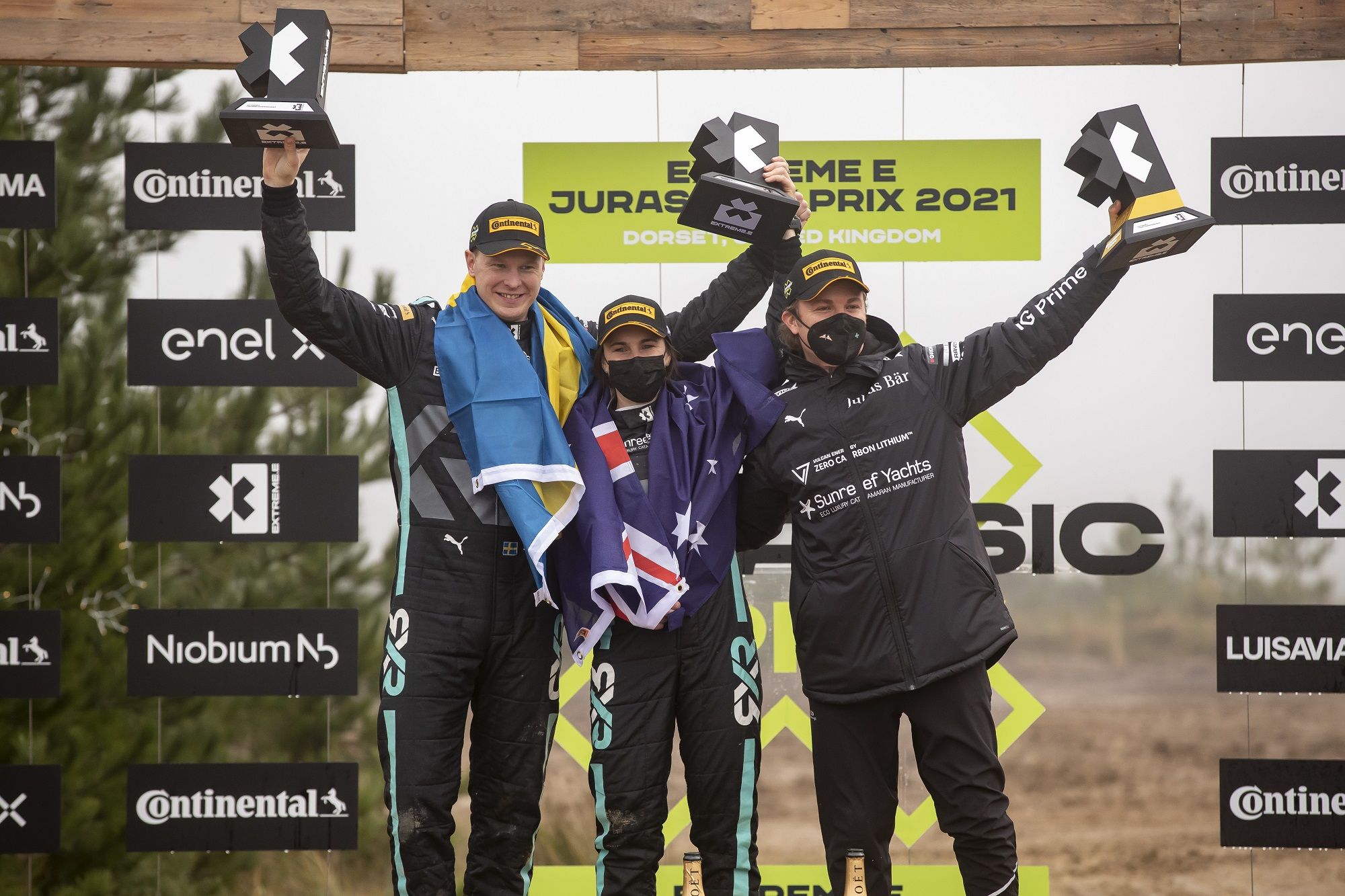 Rosberg’s RXR took the Extreme E title in the season-finale despite the win for Hamilton’s X44 in the Jurassic X Prix as both ended up on same points.

The final day of Extreme E in Dorset in the United Kingdom started with Semi Final 1 after Qualifying on Saturday. The first Jurassic X Prix SF saw X44 and JBXE take the Top 2 places after beating Veloce Racing to secure a place in the Final.

JBXE’s Kevin Hansen took the lead from X44’s Sebastien Loeb at the start as a spin from Veloce’s Lance Woolridge dropped him behind in the muddy terrain. But he recovered well from it to catch the back of the leading cars who couldn’t push as hard.

The Switch Zone worked out well for X44 as Cristina Gutierrez took the lead from JBXE’s Mikail Ahlin-Kottulinsky and Veloce’s Jamie Chadwick. They were close until the end but the former two saw-through the Top 2 spots for a place in the Finals.

Despite the push from Ekstrom, Sainz Sr stayed put as the Swede lost his bonnet to drop back. This hampered his progress even though they could continue, it eventually helped Molly Taylor and Laia Sanz with enough gap to make it into the Finals.

The final team to make it into the Finals went through the Crazy Race where Andretti United went against Chip Ganassi and XITE Energy Racing. The former’s Timmy Hansen started off well to lead Oliver Bennett and Kyle LeDuc.

The action got heated after LeDuc made an audacious move on Bennett to take second but couldn’t press Hansen enough when they arrived at the Switch Zone. Catie Munnings had the pressure from Sara Price, but the former held the lead to help Andretti into the Finals.

It was a thrilling end to the first season of Extreme E where X44’s Gutierrez got the best start to the Finals to take the lead from RXR’s Taylor, JBXE’s Ahlin-Kottulinsky, Andretti’s Munnings and AS XE’s Sanz – with the female drivers starting the action.

Gutierrez held the lead but Taylor dropped behind Ahlin-Kottulinsky and Munnings to be fourth with only Sanz behind, dangerously close to losing the title. The X44 driver entered Switch Zone calmly but JBXE and Andretti pair made contact.

Munnings had a spin but managed to continue with Taylor and Sanz still behind. The driver change kept the positions intact as Loeb eased to a win from K Hansen and T Hansen to complete the podium, as Kristoffersson managed to secure fourth after trouble for Sainz Sr.

It was enough for Rosberg’s team to secure the title and win the Extreme E championship despite ending up tied to Hamilton’s team. They each scored 155 points but the former’s three wins to the latter’s one, meant the title was theirs.

X44 kept their championship hopes alive by finishing fastest in Qualifying at the Jurassic X Prix, setting up a title-decider on Finals day with Rosberg X Racing (RXR). The result made it a clean sweep of top qualifier spots for X44’s Sébastien Loeb and Cristina Gutiérrez, who have finished all five X Prix in Extreme E’s maiden season as the fastest qualifiers.

Their title rivals RXR finished Qualifying for the Jurassic X Prix right behind them in second place and also lead the way so far this weekend in the Continental Traction Challenge worth five invaluable points for the victors. The final Qualifying session of the campaign proved to be the closest fought yet in Extreme E. Qualifying 1 set the stall out for what was to come as all nine teams set a time within 45 seconds of each other, with the top five runners covered by just over 10 seconds.

It was similarly tight in Qualifying 2 with the nine teams separated by just over 35 seconds, while 15 seconds covered the top six runners. Despite the fiercely competitive sessions it was X44 who came out on top for the fifth time this season, heading the chasing pack in Qualifying 1 and 2. RXR were a close second in Qualifying 1 and consolidated their position by finishing fourth in Qualifying 2 to secure second overall.

Behind the championship challengers and completing the top three were ACCIONA | Sainz XE Team, who have shown strong pace throughout the Jurassic X Prix weekend. Carlos Sainz Snr. and Laia Sanz were third fastest in Qualifying 1 and repeated that feat in Qualifying 2 to book their place in the Semi-Finals.

In fourth place overall were the ABT Cupra XE pair of Jutta Kleinschmidt and Mattias Ekström. A trouble-free run in Qualifying 1 saw the team finish the session fourth fastest, but they could only manage sixth in Qualifying 2 after receiving a penalty for Kleinschmidt missing one of the signage posts on her maiden run in the session.

JBXE produced a brilliant recovery after a difficult opening Qualifying session to secure fifth overall. A penalty incurred in Qualifying 1 left JBXE down in eighth, but a strong Qualifying 2 saw the team able to demonstrate their pace behind the wheel of their ODYSSEY 21 and finish second to secure fifth a Semi-Final spot.

Veloce Racing have an all-new driver line-up this weekend, but despite this have been consistent throughout to claim sixth overall. The returning Jamie Chadwick and debutant Lance Woolridge have been on the pace throughout, finishing fifth in both sessions. Andretti United Extreme E would have felt unlucky to finish sixth in Qualifying 1 despite only being 12 seconds off the leading pace in the session.

They started strongly in Qualifying 2, before Timmy Hansen was caught out by a bump on course and crashed into the trees, causing bodywork damage to his ODYSSEY 21. Although gamely recovering and completing the lap, the lost time ensured Andretti United Extreme E were eighth fastest in the session and seventh overall, meaning they will go into the Crazy Race.

SEGI TV Chip Ganassi Racing also suffered difficulties on track which ensured they will have to fight for a place in the Final via tomorrow’s Crazy Race. Kyle LeDuc and Sara Price were well in contention after Qualifying 1, finishing seventh albeit only 15 seconds off the pace-setting time. However, a steering issue on the team’s Qualifying 2 run saw LeDuc and Price slip back to last in the session and eighth overall.

XITE ENERGY RACING are the third and final team to make up the grid for tomorrow’s Crazy Race. Despite showing flashes of speed throughout the session, Oliver Bennett and GZ could only manage ninth and seventh in Qualifying 1 and 2, respectively, but still have one more opportunity tomorrow to reach their first X Prix Final of the season.

Here’s how Island X Prix in Extreme E panned out