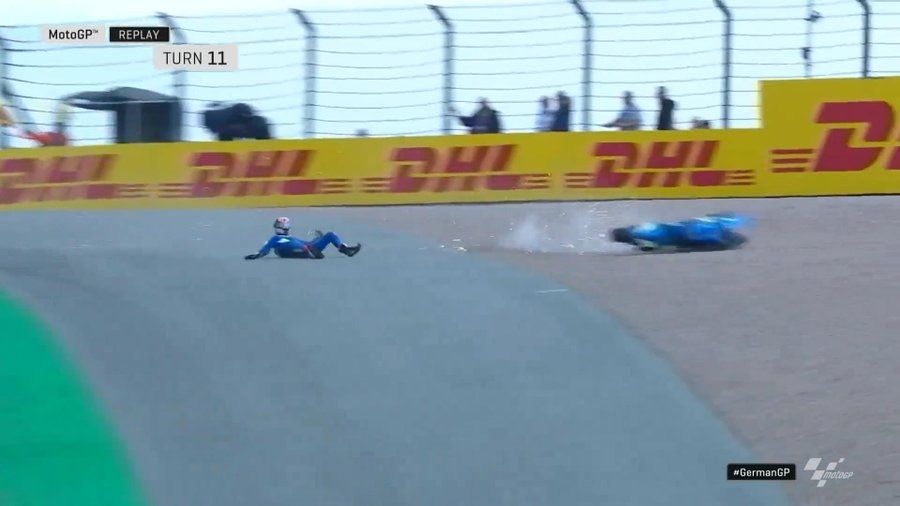 Suzuki’s Alex Rins and Petronas Yamaha SRT’s Fabio Quartararo have vowed to come back stronger after MotoGP summer break after their crash in German GP.

Having had a solid start to his MotoGP campaign in 2019 with Suzuki, Rins heads into the summer break with two crashes to his name at Assen and Sachsenring, where the Spaniard had a good chance to be on the podium at least, if not win the races.

He crashed out from the lead in Dutch GP and then from second in German GP, after having overtaken Yamaha’s Maverick Vinales. The two crashes has seriously dented his title hopes as he sits fourth with 101 points, 84 behind Honda’s Marc Marquez.

“I lost a podium,” said Rins. “My feeling with the bike was really nice and I tried to get into second place as soon as possible because I felt that my rhythm was strong. Unfortunately, I lost the front on a fast right-hander.

“I entered into it just a couple of kilometres per hour faster than usual, and that’s why I crashed. It’s a shame because it’s my second DNF in a row, but I still feel positive because my pace has been good recently and I know I can get good results again when we come back after the break.”

Suzuki lost points as well as its fights with Yamaha for third place in the teams’ championship as Joan Mir looked good in patches to end up seventh eventually. While Rins crashed little later in the race, Quartararo had his at the beginning.

It was first his first MotoGP retirement by virtue of a crash when he fell down at Turn 3, which also ended his two-race podium streak. The Frenchman lost out at the start once again after starting from the front-row but stayed with the group.

However, before he could make any progress, he crashed out. “I just made a mistake on my start,” he said. “First and second gear was ok, I tried to put the third gear and I didn’t shift. Unfortunately I broke too early and I had a touch with Jack.

“And on the second lap I tried to overtake Petrucci, I was hesitating a lot to see if I needed to do it or and unfortunately it was the wrong choice, too much lean angle, too fast and I lost the front. It’s our first mistake in the race, first crash and we will come back stronger.”

It wasn’t easy for Quartararo anyways after his shoulder trouble as the Frenchman had to soak in lots of pain killers to be able to ride during the weekend. The rookie has shown well to have 67 points to the next best rookie Mir, who has 39 to his name.