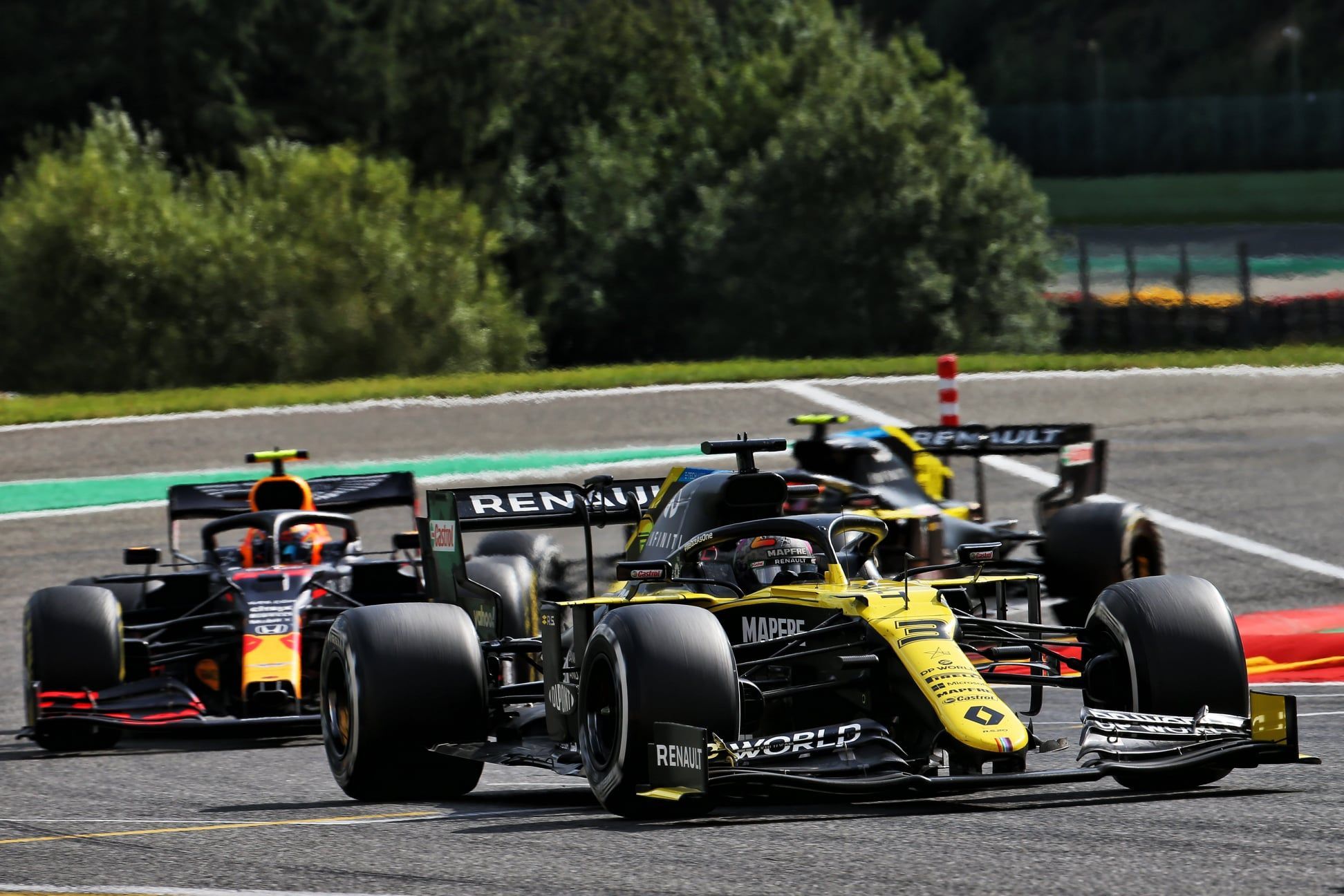 Daniel Ricciardo felt he could have hurried Max Verstappen if not for being stuck behind Pierre Gasly and Sergio Perez in F1 Belgian GP as Esteban Ocon hails Renault turnaround from Barcelona to Spa.

Since his move to Renault at the start of 2019 F1 season, Ricciardo has achieved no more than fourth place in a race, and this is precisely the result he produced at Spa on Sunday, as he led a P4-P5 finish in the Belgian GP, where they scored 23 points in all – the maximum they have done since returning to the sport.

This time, however, it appeared Renault and Ricciardo had more to offer – a stark contrast to prior P4 finishes, when it almost always seemed the pairing had maximised their result, like at Monza in 2019, or Silverstone in 2020.

Ricciardo ran well for the duration of the race, and appeared a genuine threat to Verstappen – his former teammate. At re-start, it was initially thought that the Australian would be getting a second chance at his teammate but he was denied this chance by two off-strategy cars in AlphaTauri’s Gasly and Racing Point’s Perez, who dashed any hopes of an overtake on the Kemmel Straight or the piling of pressure.

The 31-year-old expressed his frustrations over the presence of the two, to whom he passed no blame. Ricciardo said he was unsure of how the remainder of the F1 race might have unfolded without them forestalling his efforts, but he theorised he might have been more successful in his pursuit of Verstappen.

“I was a bit frustrated with Gasly and Perez’s strategy, it put a buffer between me and Max on the re-start, so without that, I think we could have genuinely been with Verstappen on the hard tyres,” said Ricciardo. “Whether we would have passed him, I don’t know but we would have had a better chance. As soon as I passed Gasly, I knew the pin was out.

“Fighting with Perez and Gasly, the tyres would overheat and it takes few laps to come back and once it did, it crept up. I was not leaving anything on the table, then the last lap, I put everything into it, but it wasn’t sustainable to hit for more laps, so I feel like I used everything,” said Ricciardo, after finishing about three seconds off Verstappen.

He made inroads, but as the laps ran out the chances of a late move for the podium diminished, and he was relegated to fourth. “I knew we would have a decent car,” said Ricciardo. “But even when I heard the lap times, that the Mercedes was dropping off tails I  thought okay, maybe everyone’s just saving their engines, and just whatever but it sounded like they were  genuinely struggling a bit and we were just getting faster and faster and faster and we had to deal with some traffic.

“I think they all kind of had the gaps and didn’t really have a hard time on their tyres, so it was really it was encouraging that pace at the end, it took me by surprise. I was getting quicker and quicker and then my engineer told me what the fastest lap was, and I think it was about half a second quicker than what I’d done and I was like maybe if I could use a bit of the battery maybe we can get it.

“And the last lap,  just about halfway around the lap. I used every bit of track I could and and I’m going for it. I’ve kind of gotten this far now I’m just gonna put it all on the line, so it probably that lap probably scared me more than Q3,” Ricciardo stated. Traditionally, Renault have demonstrated impeccable form on Fridays, but delivered lackluster performances as the weekend progressed.

At Spa, however, the team were able to sustain a high level of performance. Ricciardo put this down to car alterations in accordance with track evolution – something he seemingly feels they hadn’t done to the same extent in weekends prior. “I think we kind of evolved a little bit with the track, we weren’t afraid to still change the car on Friday night. A lot of the time when it’s good, you don’t want to touch it,” he said.

“But the track does change and a lot of the time you do need to keep changing the car to suit the conditions.” Ricciardo also acknowledged that the the pace of Renault will have been helped by the characteristics of Spa – a track that favors those with higher power and lower drag, this being a description the team’s 2020 challenger seems to fit.

“We made a few changes on the car, which seemed a little brave at the time, but it made sense to do what we had to do and,” said Ricciardo. “I think it worked. At the time it feels a bit risky to touch such a good car but I think we just took more of a calculated risk and then put it on the line and it paid off. But I think comparing Barcelona to here I think naturally this circuit does suit us more.

“The car is better with this low downforce settings for  reasons that I’m not too sure. I’m not an aerodynamicist but as a driver I certainly feel it is in a happier place with this style of circuit.” Ocon, meanwhile, was merely happy to have a resurgence after a poor performance at Spain like Ricciardo mentioned.

On the final lap of the race, the Frenchman overtook Red Bull’s Alexander Albon to secure fifth after losing to him in the pit stop, making for a result as good as any Renault has had since their return to racing in 2016, matched only by their 4-5 at Monza in 2019. “It has been very good, a strong weekend,” said Ocon. “The car has been quick, we are turning a very difficult weekend like Barcelona to very-very positive one here, so massive improvement.

“I am very happy and pleased with that, it feels good as well because this week, we will be at the track with the same characteristics, even more extreme, so we should be at our hands as well,” summed up Ocon, who also spoke of the behind-the-scenes work with relation to tyre management.

“I passed Alex at the start but we lost the place in the pit stop, so managed to get him in the end,” he said. “There has been a lot of thought going on tyre management because of course having a weekend like Barcelona, what could we do and extract more from the car. We know we have the pace and we are trying to understand these tyres to extract more from the car which seems to be working at the moment.”

Here’s why safety car was deployed