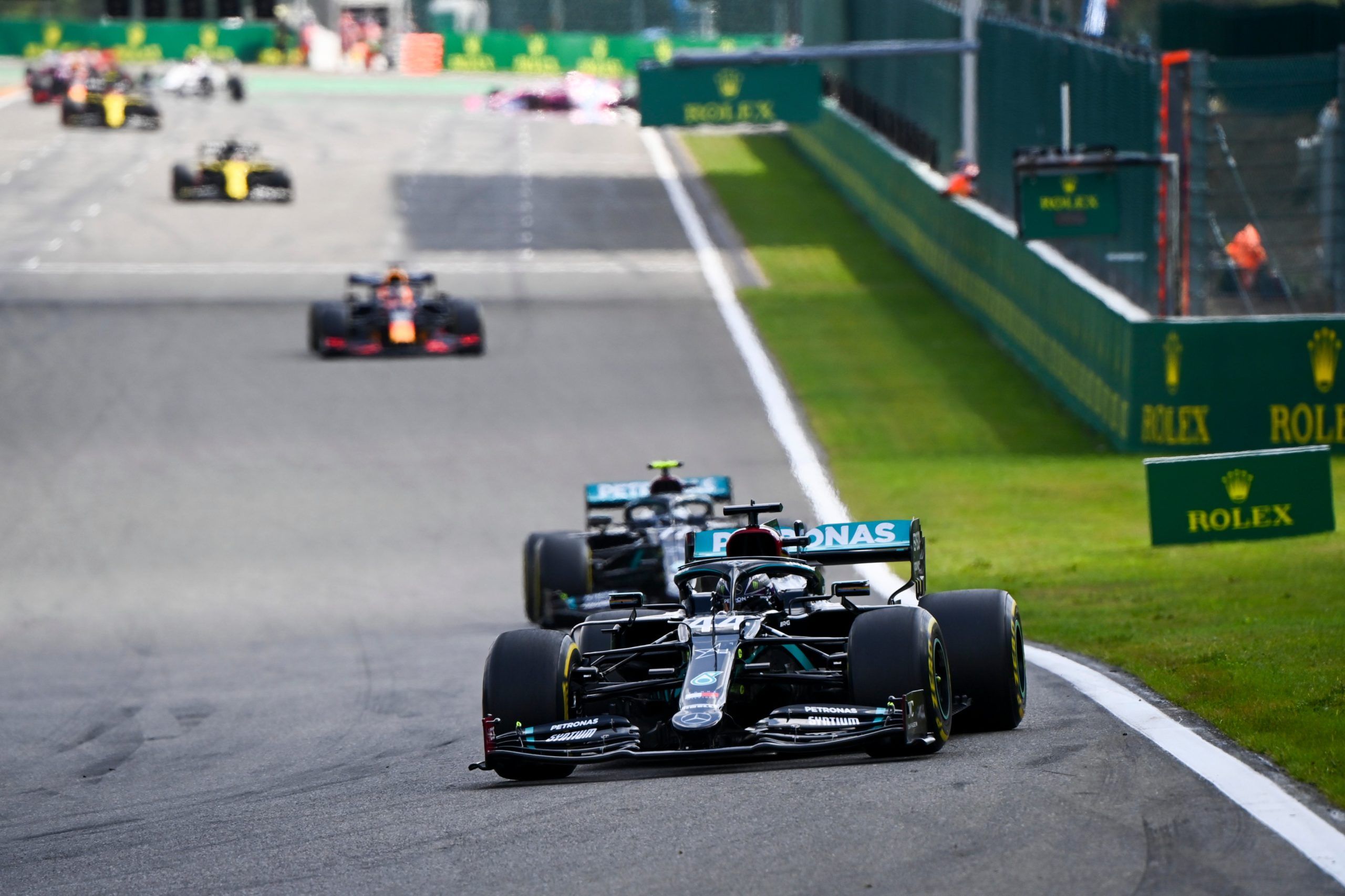 Pole-sitter and Mercedes’ Lewis Hamilton started the F1 Belgian GP at Spa-Francorchamps well to head the way from a fighting Valtteri Bottas as Red Bull Racing’s Max Verstappen fended off the pressure from Renault’s Daniel Ricciardo.

The Australian stayed with Verstappen in the first few corners but the Dutchman kept the position. It wasn’t the same for the other Red Bull of Alexander Albon, though, as he lost a place to Esteban Ocon after getting his exit in Turn 1 wrong.

Racing Point’s Lance Stroll did well in seventh as Ferrari’s Charles Leclerc made a super start to be eighth from Racing Point’s Sergio Perez and another fast-starter AlphaTauri’s Pierre Gasly, with the sole remaining McLaren’s Lando Norris dropping out of Top 10.

His teammate Carlos Sainz’s F1 Belgian GP got over even before it started as an exhaust failure due to the power unit forced him to sit out of the grand prix. As Hamilton led Bottas at the front, the Finn started to push but the Brit responded to it.

Behind, Albon got stuck behind Ocon, while Gasly started to move up on the hard compound as he not only passed Perez in a daring move onto Eau Rouge but cleared Leclerc too to be eighth as the Monegasque dropped outside Top 10.

Norris got back to 10th as the F1 Belgian GP was neutralised due to an incident for Alfa Romeo Racing’s Antonio Giovinazzi and Williams’ George Russell, where the latter was just a passer by caught in the crash for the Italian.

Giovinazzi lost his car on the kerb and hit the barrier as his strewn tyre then hit Russell’s car with debris all over the track. Teams got a free stop with everyone bar Gasly (hard) and Perez (soft) doing so, where only Albon was switched to the medium compound.

The rest of them moved to the hard compound. There were problems for Leclerc in the pits as Ferrari were not ready as Red Bull managed to get Albon ahead of Ocon as well after the Thai racer lost the place at the start of the F1 Belgian GP.

The re-start had Hamilton lead the way from Bottas and Verstappen as Gasly hung onto fourth with Perez losing out to Ricciardo and Albon, before pitting to change to the hard compound. With the field so close, the Mexican dropped to last as a result.

The Ferrari cars were left to battle each other as Leclerc tried a move on Vettel for 13th but couldn’t get past him at Les Combes. This fight happened after the German lost out to his former teammate, Alfa Romeo Racing’s Kimi Raikkonen.

It steadied on after over halfway mark with only Perez and Gasly making up places being on a different strategy as they tried to get back into the Top 10. Leclerc was forced to another stop as Ferrari to top up the pneumatic pressure.

At the same time, Vettel was pushing for another stop due to the tyres as Hamilton led the way comfortably while Ricciardo in fourth kept Verstappen on his toe, as Albon had Ocon and Norris catching him up towards the end of the race.

Gasly, meanwhile, passed Perez for ninth as he chased eighth with Stroll struggling. He eventually got the Canadian as majority of the F1 drivers started to struggle ahead with laptimes going slower and slower for the leaders.

Hamilton had it eventually to win the F1 Belgian GP over Bottas by 8.448s as Verstappen was third from Ricciardo, who got the fastest lap point on the final lap. His teammate made it a Renault P4-P5 after Ocon passed Albon on the final lap at the Kemmel Straight.

The strategy for Albon almost worked but he had to content with sixth with Norris managing to get the Racing Point cars to be seventh as Gasly was eighth, Stroll ninth and Perez rounding out the Top 10.

AlphaTauri’s Daniil Kvyat missed out on a points finish to be 11th as Raikkonen was the lead Ferrari car ahead of Vettel and Leclerc, with Haas’ Romain Grosjean in 15th, Williams’ Nicholas Latifi 16th and Haas’ Kevin Magnussen 17th.