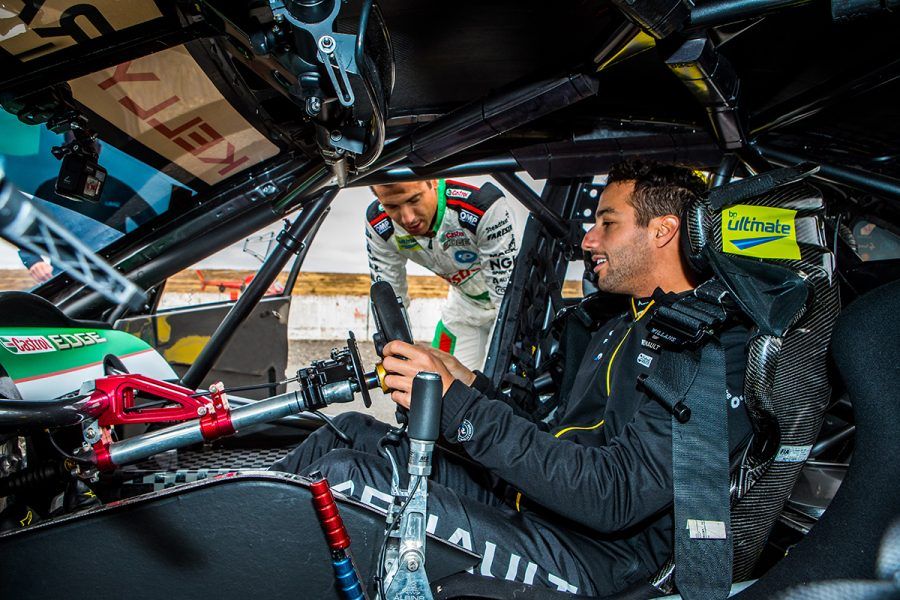 Renault F1 Team’s Daniel Ricciardo got a taste of another new machine when he drove the Nissan Supercar of Rick Kelly ahead of 2019 F1 season start.

The promotional event was part of Castrol Racing, which sponsors Supercar driver Kelly’s car in the Australian’s premier touring car championship. This is Ricciardo’s second event with Castrol after he drove the Renault Megane RS TCR car in the UK last week.

While the TCR event was more for the customers of Renault and Castrol, the Supercar run was for the F1 driver to get the feel of a Supercar. The event took place at Calder Park where Kelly served as a passenger first and then took Ricciardo around.

Although Ricciardo got to sample a Red Bull’s Sandman ride car at Sandown in 2016 when he raced for Red Bull Racing in F1, but it wasn’t the same as driving a 600 horsepower V8 engine Nissan car he did on Wednesday for 10 laps.

“I didn’t have ear plugs, I probably should have worn ear plugs,” he said. “But yeah, the upshift and pulling a [gear] stick feels good. A paddle-[shift] is easy, it’s made my life easy as a racecar driver because I can’t heel-and-toe. But all that sort of stuff.

“The vibrations, it all just feels raw. The downshifting and banging it through and hearing it backfire. It was awesome. Sandman was, I guess, the closest thing I’ve had to driving a V8. But that didn’t really want to drive in a straight line.

“That actually scared me. Probably because of that I was like ‘If that’s how they really are…’ But this felt more race-ready. I felt like I could have a bit of a go in this today, whereas the Sandman was a couple of laps of filming.

“I didn’t get enough time to get a real feel of it. This was… I don’t know, it was cool. They’re fast as well. It’s got some ponies. Coming onto the drag strip here where it was a bit slippery, that was my favourite part.

“It would always snap out a bit. That was fun. I’ll get in the F1 car on Friday and be like ‘this feels weird’. It’ll be like I’m laying down in it. But you adapt quickly. I’ll do an install lap and I’ll be like ‘right this feels normal’.

“But it was cool just to loosen the cobwebs. There is so much media this week, so to do something active to keep me firing was really cool.” With two events undertaken by Ricciardo for Castrol, one can expect more as the company sponsors other series too.

What an awesome day! Thanks @castrolracingau for the chance to give fellow @gopro Athlete @danielricciardo some laps in my Supercar, and thanks Dan for the passenger ride! He adapted to it so quick, the boy can drive! In-car vision to follow… pic.twitter.com/ack4Z2INik