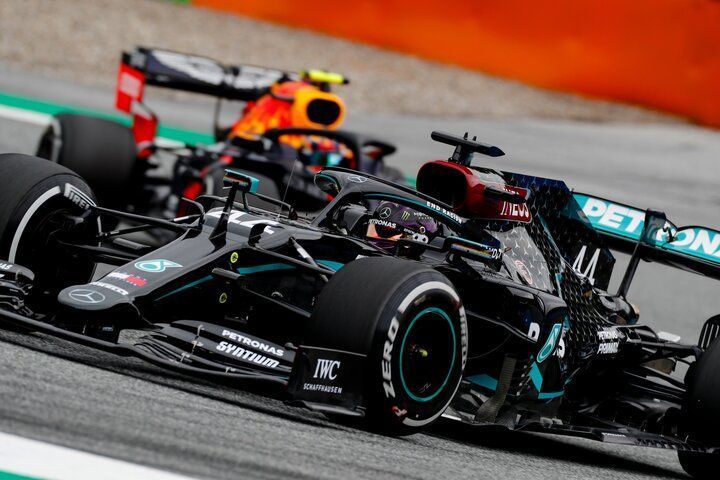 It already looked like that Red Bull were firm to seek clarification on Mercedes’ DAS system as Christian Horner was clear to Sky Sports about them wanting to end the matter within this weekend itself, even though Toto Wolff hoped they wouldn’t.

Wolff put it down as an innovation, something which helps with the tyre temperature in qualifying and or F1 races. He added that if removed, it will also upset the balance of the car due to its weight. “It works well, it’s a cool innovation,” he said.

“I think we will still be protested today and then there will be clarification from the FIA. Then we will see what prevails. It certainly helps with the tyre temperature, but when it is removed we have a massive weight advantage because it weighs a lot and is in an inconvenient position.

“The engineers tell the drivers when to use it. The most effective way is probably in a warm-up lap or in a lap behind the safety car. All teams are pretty much aware that we are in a sensitive situation with going racing.

“It’s the first race, and I think on one side, it’s fair enough to seek clarification, but on the other side we are aware that we don’t want to end up with a big debate on Sunday. I think Christian is going to take the right actions.

“Controversy and different judgement on engineering innovation has always been a part of Formula 1, and this is what’s to be be expected in a way and it’s part of the risk. I respect Christian’s position. Clarification is always good. We think we are on the right side.

“There was a lot of talking and exchange with the FIA. That is the reason why we have it on the car, so we will both bring our arguments forward and then let’s see,” summed up Wolff. The Austrian’s soft plea hasn’t converted though with Red Bull lodging official protest.

Earlier, Horner said in FP1: “It’s a very clever system. All credit to the ingenuity behind it, but I think the fundamental question for us is, you know, does it comply with the regulations in what is a fundamentally grey area?

“Obviously we do want clarity on it, because it does have an impact regarding the rest of this year. It’s something that’s been outlawed for next year. But the question is, is it right for this year? So these are the questions that we’ll be asking of the FIA through the necessary channels.”

In FP2, when Sky Sports directly asked if they are ready with their own system and wants to understand the legality, Horner did not answer if they have while praising it as a ‘clever’ idea again, but stuck to his point of clarification, needed this weekend itself.

Regarding topic of Red Bull having their own system like Mercedes one, Horner said: “It’s a very complicated system, so obviously a lot of work has gone into it. We’ve certainly looked at it and like any component, it has to earn its place on the car for the penalty that it carries, whether that be weight or packaging etc. It’s certainly something that, subject to a clarification, would be under evaluation for the rest of this year.”

The documents from the FIA had summoned for both cars, where team representatives of Red Bull and Mercedes are asked to meet at 19:10 local time:

Looking at the Technical Regulations of 2020, Artical 3.8 relates to Aerodynamic influence which states:

a. Must comply with the rules relating to bodywork.

b. Must be rigidly secured to the entirely sprung part of the car (rigidly secured means not having any degree of freedom). With the exception of the driver adjustable bodywork described in Article 3.6.8 (in addition to minimal parts solely associated with its actuation) and the parts described in Articles 11.4, 11.5 and 11.6, any specific part of the car influencing its aerodynamic performance must remain immobile in relation to the sprung part of the car. Any device or construction that is designed to bridge the gap between the sprung part of the car and the ground is prohibited under all circumstances. No part having an aerodynamic influence and no part of the bodywork, with the exception of the parts referred to in Articles 3.7.10, 3.7.11 and 3.7.12, may under any circumstances be located below the reference plane. With the exception of the parts necessary for the adjustment described in Article 3.6.8, any car system, device or procedure which uses driver movement as a means of altering the aerodynamic characteristics of the car is prohibited.

As for Article 10.2.3 comes under Article 10 which relates to suspension geometry:

10.2.1 With the steering wheel fixed, the position of each wheel centre and the orientation of its rotation axis must be completely and uniquely defined by a function of its principally vertical suspension travel, save only for the effects of reasonable compliance which does not intentionally provide further degrees of freedom.

10.2.2 Any powered device which is capable of altering the configuration or affecting the performance of any part of any suspension system is forbidden.

10.2.3 No adjustment may be made to any suspension system while the car is in motion.