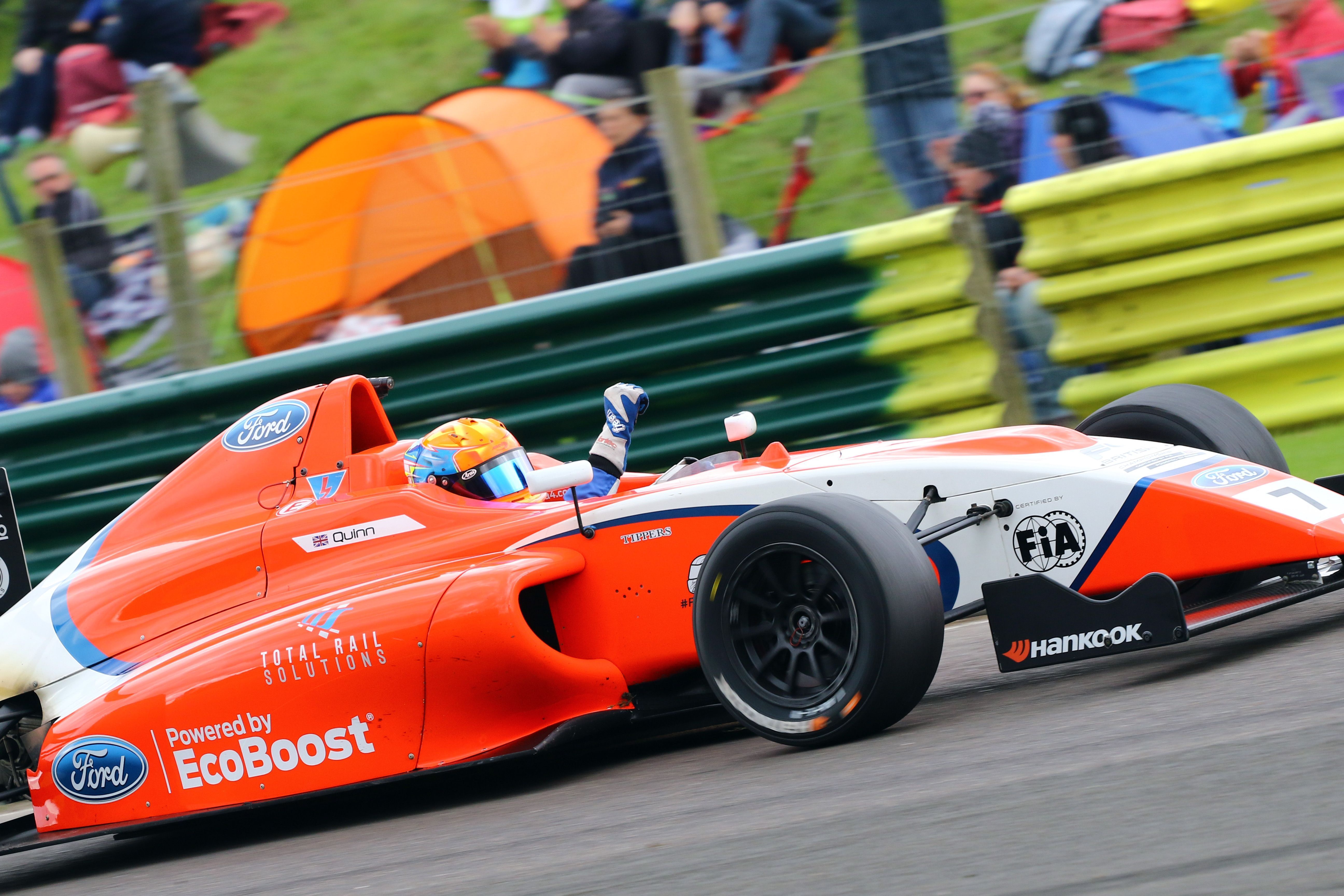 Alex Quinn scored his first win of the 2017 F4 British Championship certified by FIA – powered by Ford EcoBoost campaign at Croft ahead of team-mate Oscar Piastri in a superb one-two finish for TRS Arden.

Starting on the front row Quinn made an excellent getaway, as team-mate Ayrton Simmons fell into the clutches of fast starting cars behind. Piastri followed Quinn’s example as the lights went out, charging from fifth to third, after which the safety car was deployed due to the stranded car of Daniel Cao in the gravel at turn one.

Quinn wasted no time at the restart, immediately putting daylight between himself and Jamie Caroline. Piastri perfected the restart and found himself in the slipstream of Caroline down the main straight, but was unable to pull off a move into Clervaux. The Aussie persisted though, sneaking past later on the restart lap, with Ayrton Simmons and Linus Lundqvist (Double R) achieving the same feat moments later at Complex and Hairpin.

Out front Quinn set about pulling away from the squabbling field behind and brought team-mate Piastri with him. At one stage Piastri looked to have more pace, dancing all over the gearbox of Quinn. The team-mates provided a thrilling show with Quinn doing brilliantly to keep Piastri behind to take his first win with TRS Arden in British F4, adding to his collection of three wins from last season when he won the Rookie title.

Logan Sargeant (Carlin) completed the podium and made it a brace of third place finishes for the weekend. Despite a far from ideal start which saw him drop a couple places from fourth, he put on a brilliant fightback which featured some skilful overtaking, not least on championship leader Jamie Caroline at Sunny In.

Yesterday’s winner Linus Lundqvist just missed out on returning to podium in fourth, but brought home another strong points score ahead of the final race of the weekend from which he will start from pole.

Fortec Motorsport’s Oliver York worked his way up from ninth to fifth and return to the top step of the Ford F4 Challenge Cup podium, while team-mate Hampus Ericsson finished third in class and broke into the points to finish ninth.

Said Ford F4 Challenge Cup class winner York: “It was a really good race overall. There was plenty going on. The car felt amazing so huge thanks to Fortec. I had some really nice battles.

Patrik Pasma gained two places to finish sixth ahead of team-mate Caroline who fell away from the fight towards the front of the field after contact with Ayrton Simmons at Tower. The latter’s race coming to an abrupt end after it had promised so much starting from pole.

Like Simmons, Jamie Sharp’s race came to a halt on lap nine, the Sharp Motorsport driver running wide and clattering the barriers, ultimately denying him another top ten result. Karl Massaad was another not to make the chequered flag after a sizable off just three laps later which saw the red flag thrown and with it the chequer.

TRS Arden had further reason to celebrate. Not only did Olli Caldwell make history by becoming the youngest ever Formula 4 driver with his competitive debut in the race, having turned 15-years old just hours earlier, he also finished in the points. A tenth place finish a fantastic achievement having started last due to being unable to take part in qualifying yesterday because of his age. Caldwell was calm and composed in his maiden outing and gradually picked his way through the field in a performance which belied his age.

Round 15 of the F4 British Championship certified by FIA – powered by Ford EcoBoost follows at 1740.