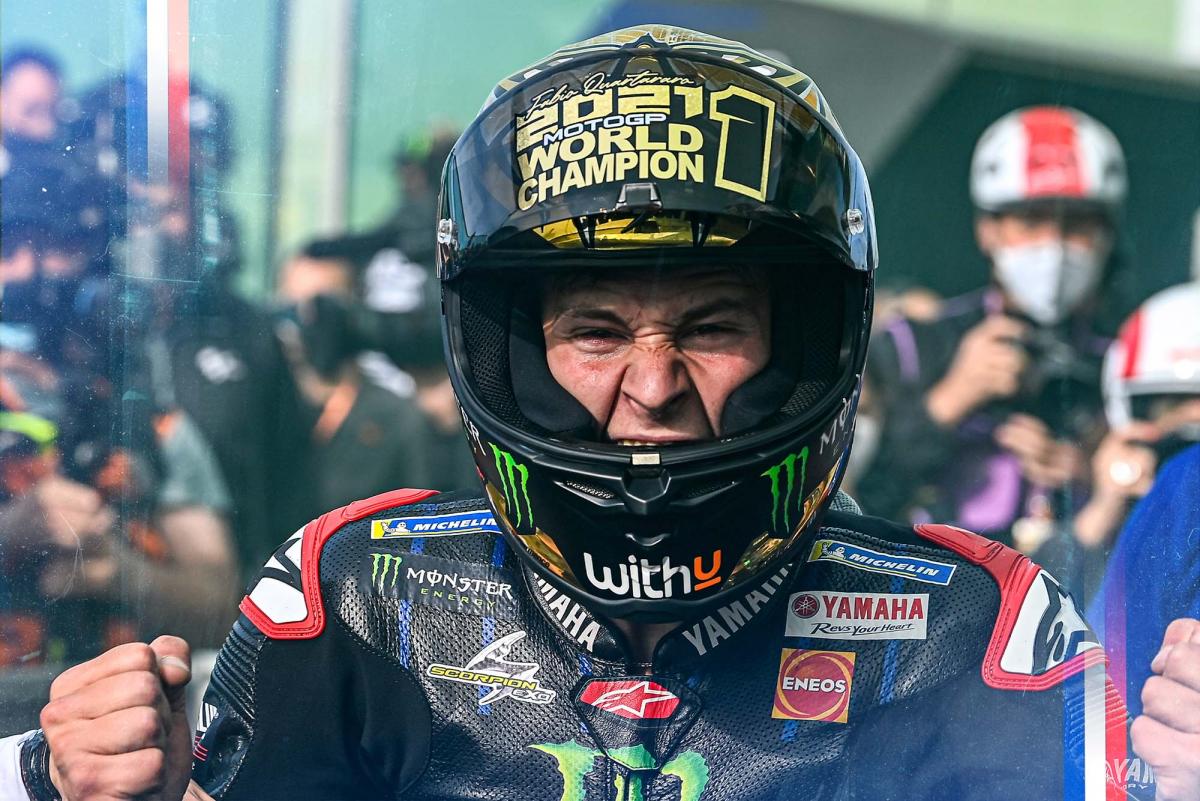 Fabio Quartararo had a big list for reflection after having won his first MotoGP title in Emilia Romagna GP, spending nearly 40 minutes speaking to press.

Yamaha’s Quartararo was pretty chilled out in his MotoGP champion’s press conference after the Emilia Romagna GP, after having won his first premier class title in first attempt at Misano with some help from the crash of Ducati’s Francesco Bagnaia.

Quartararo drank from the champagne bottle while speaking to media present at the venue – both in English and French – along with few on Zoom. There was slight connection issue of the internet, but they returned towards the end to complete their Q&A.

Quartararo: “Just before the race I was with Tom [Maubant] (best friend and personal assistant) and I was nervous, I was feeling stressed. But he said ‘just think about the last three races of last year’ which were a total disaster. I remember just wanting to finish the championship at whatever the position was.  Today I started the race which made me world champion. I think everything that happened last year helped me a lot to win the title today.  Thanks to all these people for supporting me in this moment and I think I learned a lot during these two years in MotoGP, but I still have a lot to learn to achieve more results like that.”

Quartararo: “To be honest, last year we fought to have the factory bike but with the Covid situation and everything, the 19 bike was better. With the 2021 (bike) I felt much better and the feeling on the front is what made me I think win. We know that power is something we need to work on, but the feeling I had to overtake on the brakes; not this race, but in general, has been much higher than 19 and 20. Yamaha has worked a lot. We still have a lot to improve for next year because we know power is something so important. But right now, with the bike I was feeling at one.”

Quartararo: “Consistency was key this year. I finished all the races. I always took home points, even in Jerez, when I had the compartment syndrome problem. The 2021 MotoGP season was similar to 2019, but I had more speed this year and as I said, I was more consistent too.

Key point in the season:

Quartararo: “For me the key point was Mugello when we won, because Bagnaia was super strong. He made a mistake on the second lap. And I had a fight with Johann, and that was the key point I think where I took a lot of confidence back.”

Quartararo: “I think this year I never really got angry. Last year I remember in Valencia the bike was not working at all, and I arrived to the box and I was not shouting, but telling my crew chief ‘no, it’s not turning, I can’t brake, I can’t accelerate’. But then my crew chief said, ‘OK, now you are angry, but you need to tell me what is going on because if we need to improve something we can improve the braking, the turning, the exit’. So, I say ‘OK, this is true’, so I needed to think. And when you are angry you can’t describe what are your problems.

“This year every time I had a problem… I remember really well at Assen in FP2, when Maverick was half a second faster than us, I stayed so calm and at the end we won the race. And when you see being calm brings you to that kind of result, you want to think like that. Even if you are in a bad moment, stay calm and you will make a step. So, being calm I think was something that made me grow a lot and that’s why this year I stayed calm. Of course, there were some moments where I was super-angry, like yesterday when I finished P15. I could have shouted, screamed, whatever. I didn’t want to take the risk enough in Q2, so P15, that’s where I am.”

Quartararo: “The 2016 and 2017 seasons, I would say. I always mention the race in Argentina, where I started from P28, almost near the safety car. That was the hardest, but also the one that woke me up. After winning the two titles in CEV, my goal was to do the Moto3 World Championship but I couldn’t win even a race. In Moto2, the first year was tough and only in my second year, I won two races, I take the other too even though I was disqualified. But I didn’t expect to move to MotoGP. In Valencia test, I said ‘where the hell did I end up?’ I couldn’t ride. The bike was too powerful, although now I am asking for more power. But I was able to progress, step by step. I eventually got closer by the Qatar test and that’s when I realised that I can do well.”