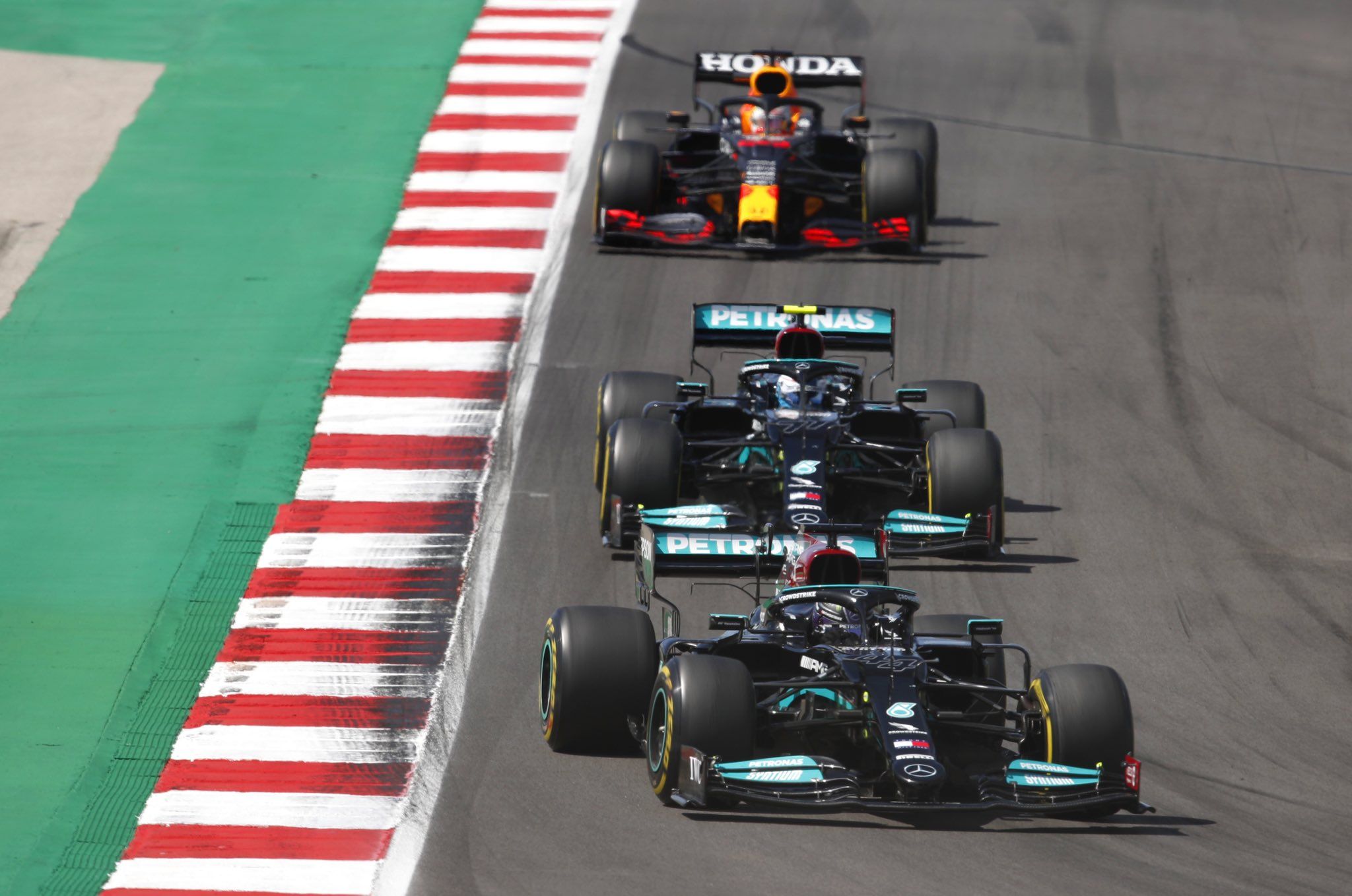 Alpine’s Esteban Ocon was sixth from McLaren’s Lando Norris, with Ferrari’s Charles Leclerc in eighth from AlphaTauri’s Pierre Gasly and Aston Martin’s Sebastian Vettel in the Top 10. The race was soon neutralised due to a safety car period.

The re-start worked well for Bottas and also Verstappen, who cleared Hamilton, for second. In fact, Norris passed both Perez, Sainz and Leclerc to move up to fourth, with the Mexican in fifth from the Spaniard and Monegasque, where Ocon lost places to be eighth.

Behind them, Gasly and Vettel stood their ground, as McLaren’s Daniel Ricciardo climbed up to 11th from 16th on the grid. As Bottas led the way in F1 Portuguese GP, Hamilton fought back against Verstappen to take second, while Perez retook fourth from Norris.

Having passed Verstappen, Hamilton caught Bottas and passed him around the outside at Turn 1 to lead the F1 Portuguese GP. At the same time, Ricciardo brought himself in the Top 10 after passing Vettel in the same corner a lap before the Brit.

The F1 Portuguese settled down as the pit stop game started at around Lap 36, with Verstappen stopping first. Bottas did so a lap later but the Dutchman caught up with him and passed him, when his tyres were still cold on the out lap.

Hamilton stopped a lap later but maintained his lead, while Ferrari played a team order game, with Sainz giving his place to Leclerc at the fag end of the Top 10. In fact, the Spaniard lost to a faster Ocon in the fight for seventh.

At the front, Perez led F1 Portuguese GP without having stopped. But the Mexican racer almost had a collision with Haas’ Nikita Mazepin while passing him. He eventually passed him, as Hamilton continued to chase him along with Verstappen and Bottas.

Norris stood fifth from Leclerc, Ocon and Sainz, as Ricciardo and Alpine’s Fernando Alonso cleared Gasly to be ninth and 10th. Mazepin, meanwhile, was given a 5s penalty for ignoring blue flags, as Perez was finally asked to pit after losing to Hamilton.

He dropped to fourth after his stop as the positions settled down, with Alonso making a fine pass on Ricciardo for ninth. The Australian came under pressure then from Gasly for the final point, with Vettel a bit far off from this tussle.

There was a small scare for Bottas with a message of losing power but it was a minor issue, which sorted itself. The Finn switched strategy and pitted late in the race to try and push for a fastest lap, take it away from Perez, who had it at that time of the race.

With the gap created, Red Bull chose Verstappen to pit as well and push for the fastest lap. At the fag end of the Top 10, both Alonso, Ricciardo and Gasly passed Sainz to gain a place, which dropped the Spaniard to out of the points position.

At the front, Hamilton had it under control to win the F1 Portuguese GP from Verstappen and Bottas, where the Dutchman took the fastest lap from the Finn. However, the Mercedes racer retook the fastest lap after the Red Bull racer’s lap was deleted due to track limits.

Perez was fourth with Norris in fifth and Leclerc in sixth, ahead of the Alpine duo of Ocon and Alonso. Ricciardo and Gasly rounded out the Top 10 with Sainz in 11th from Giovinazzi, Vettel, Aston Martin’s Lance Stroll and AlphaTauri’s Yuki Tsunoda in Top 15.

Behind them Williams’ George Russell was 16th ahead of Haas’ Mick Schumacher, Williams’ Nicholas Latifi and Haas’ Nikita Mazepin – the German had cleared the Canadian in the end stages after piling up pressure on him. Everyone from Giovinazzi ended up a lap down, while the Russian was two laps down.