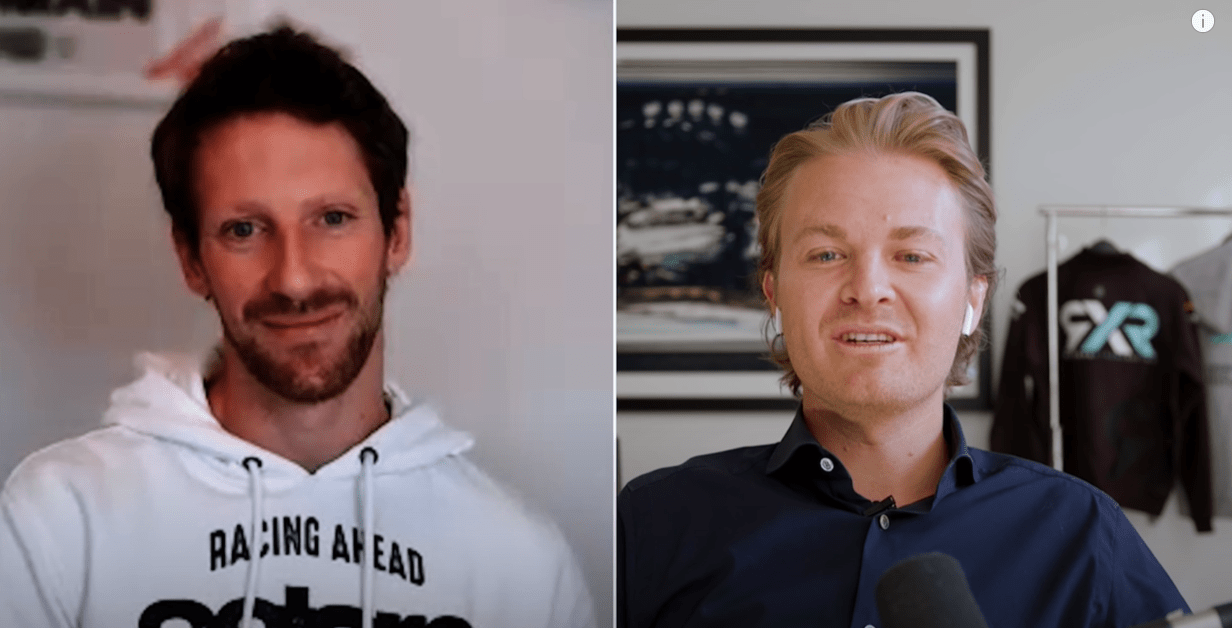 Romain Grosjean features on the F1 podcast with Nico Rosberg as he talks about his early days, crasher name, accident, IndyCar move and more.

The 2016 F1 champion Rosberg caught up with one of the hero’s and luckiest people alive from 2020, Grosjean. His podcast kicked-off with a small talk where the Frenchman discussed about his home life in Switzerland, the flights cancellations, Jet Lag and Covid-19. He stated that he is certainly enjoying the new life in IndyCar.

He then talks about his father beginning racing at 40-years of age, Grosjean was eight then, and he then started in Karts because of his father’s hobby. He only felt when he got to GP2 that he could reach F1. It then led to discussion about being Renault test driver and eventually being named as its race driver at Hungary amid the Singapore episode.

Grosjean says that he did not feel too much when he became the second driver in 2009 but he learnt a lot from driving alongside Alonso. He then talks about returning to F1 in 2012 after two years out and the first number of races that season where he achieved some success but was involved in several accidents also which in his opinion were not all his fault. He did feel he was unfairly branded a crasher in 2012.

This led to him starting to work with a Sport Psychologist in 2012 when he was having a tough time of it. He talks about almost winning at Suzuka in 2013, one that got away and also about almost losing confidence because of incidents where the driver criticism hurt him greatly.

Talks about Kimi as a team mate and he reckons over a lap Alonso was the quicker.  Says as a team mate he and Kimi never really spoke to each other.  Spoke of several good memories in his F1 career and went out with his head held high.

He went on to talk about the Halo and at the outset he was opposed to it but he now realised it saved his life. Thus he talks about his accident in 2020. He says he did not feel any fear and thought at one point he could not get out and that, that was it. He then thought about his family and wanted to get out asap and was relieved to get out of the car.

The accident thought him a lot about himself.  While stuck in the car, he had accepted his fate. He said he was thinking about Niki Lauda while trapped and advised he is a legend of F1. He then goes on to talk about the trials and tribulations of the hand burns he suffered and adds that he enjoys life much more now.

He states he now sees the fun in sport after what had happened even though he remains professional. He returned to talk about Sport Psychologists and advises that there is “always” a solution to a problem. His own solution is to never give up.

They then moved on to talking about his IndyCar move for 2021 where he stated that he was not worried when he sat in an IndyCar for the first time – he actually sat in the Haas again five days after his crash.  He says it is impossible to drive without thinking about the risks.

He said he never thought of quitting after his crash and when he was in hospital, he always thought of a racing return. He has ambitions to win in IndyCar and would also love to do Le Mans also. They then discuss about the difference between F1 and IndyCar and the atmosphere is a lot different.