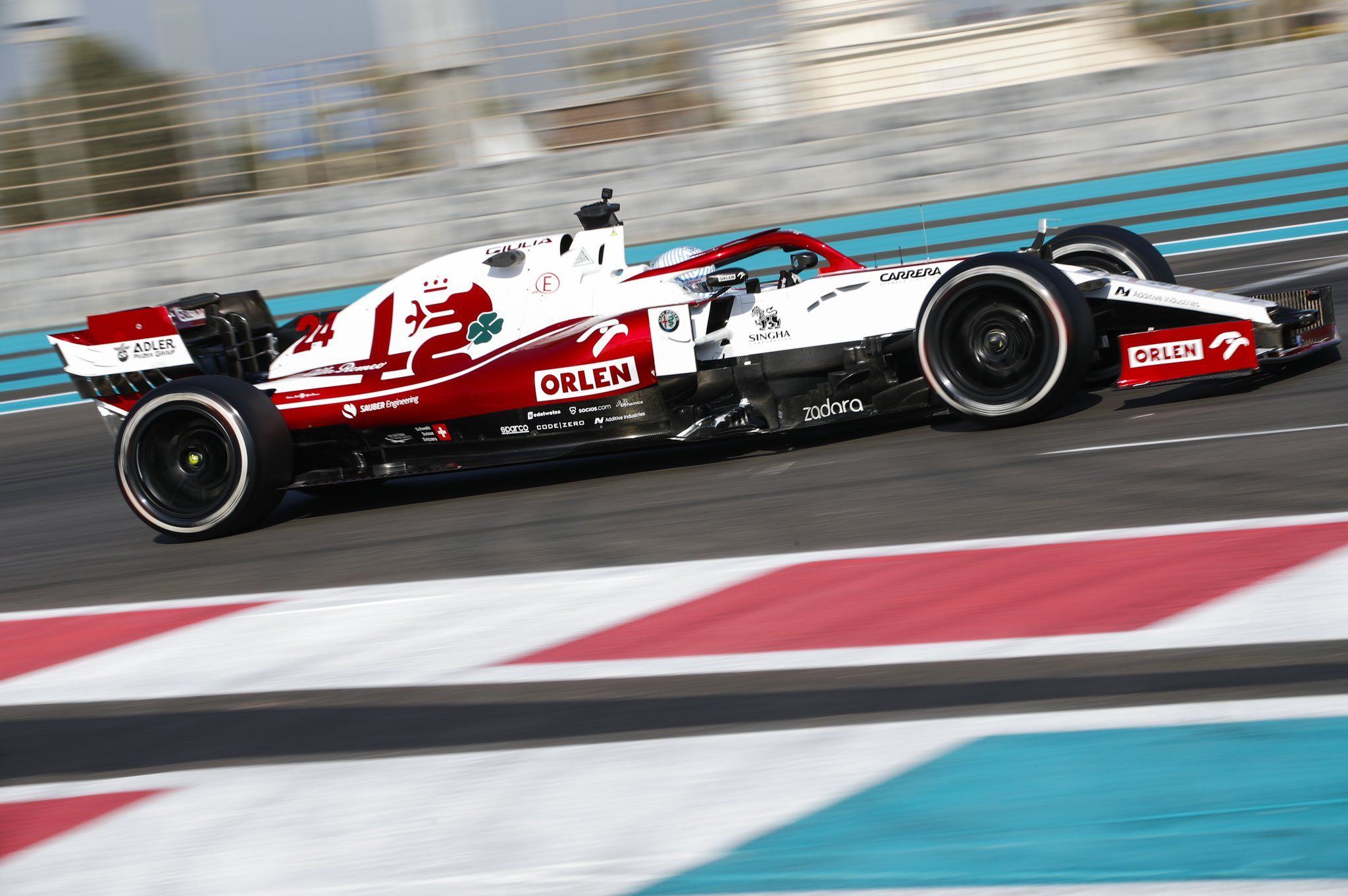 Mario Isola dwells into the findings from two-day 18-inches Pirelli F1 tyre test in Abu Dhabi as he speaks on general findings plus wheel rims, temperature, understeer and more.

The two-day 18-inches Abu Dhabi Pirelli F1 tyre test saw mostly the final version of the new compounds being used by nine teams using the mule car. Only Williams were not part of it as they took an early decision which they couldn’t go back to.

For others, it was mostly the regular drivers undertaking the test where only Lewis Hamilton and Nikita Mazepin were the ones to miss. Even the sole newcomer Gunayu Zhou got the taste of the new 18-inches F1 tyres after driving with the same in F2.

Pirelli F1 chief Isola shared the general understanding – to media including FormulaRapida.net – from the test where the C3, C4 and C5 compounds could be judged in a much better way than C1 and C2 which weren’t as good tyres for the type of circuit.

Amid understeer and graining, the teams didn’t face much troubles where they also ran the wheel cover. They couldn’t do much running on that due to the current brake system which is not adjusted to the 18-inches tyres but nevertheless, there was some laps under it.

Overall, the feedback was positive as drivers could generate and keep temperature for a wider period too apart especially with the soft compounds which was more suited to the circuit. The understeer issue is hoped to lessen when the new car is finally used.

Isola: “For the 18-inches tyres test, teams had available all of the new compounds and they used all of the new compounds on many laps. Short runs, long runs, I have to say that they in general we found, first of all the delta lap time between compounds in line with our tyre development test. So, I can say that this number is quite in line with our findings during the year and during our tyre development test. Clearly, the C1 and C2 are not the best compounds for Abu Dhabi, it is a low severity circuit where we mostly use C3, C4 and C5. So, in general, for C1 and C2, the comment was that the grip was low but that they were very-very consistent.

“I can say that the general comment from all the drivers was about understeer, it seems like our rear tyre is quite stronger, it’s pushing a lot of the front, and the general feedback was on an understeer balance. Consider that using the new cars, the possibility to adjust the setup was limited, so in some cases even if the teams were working on the car, the cars were still understeering because of the strength on the rear tyre. What we have done was – after Day 1 – looking at the data we got from the teams, we saw a margin in the pressure especially in the front pressure, so we added the possibility to decrease the front pressure for Day 2 by 1.5 psi.

“That was useful to reduce the understeer, obviously giving more footprint on the front and reduced the graining especially on the C3. We still have some abrasion and graining on the C4 and C5, but they are the softest compounds, so it makes sense. But with this reduction in pressure the C3 was working better, I believe that the graining was the main limitation in terms of performance during these two days. In terms of lap time, I would say they were quite good because if you compare for example on Day 1, they were a bit more than one second slower compared to the 13-inch tyres. I’m not considering the fast lap made by Nyck de Vries at the end of Day 1, that was clearly a qualifying lap, while with the new cars they were not focusing on the quali lap.

“So, taking as a reference 1m25, a high 1m24 set by the 13-inches, we have a difference that is in the range of 1.5 seconds per lap, that is quite acceptable considering that the cars are not fully optimised and next year with the new cars the setup will be much better and more balanced. Other comments from drivers that I have collected in these two days – a bit more difficult in braking, easier to lock sometimes, they felt the weight of the tyres, the front rim is 2.5kg heavier than the 13-inches and the rear is 3kg heavier than the 13-inch tyres, so they felt this on the steering wheel.

“They reported very good straight-line traction, in some cases some snap oversteer that is in line with the fact that with the understeer you tend to use more steering angle and when you lose the grip from the rear its snappier so it is quite coherent with the other comments. Some teams decided to test the rim cover in some runs, but these tests are not really representative, first of all because the brakes are not the 2022 brakes, so if you fit the wheelcover you have the temperature that is increasing quite a lot and the heat exchange between the brake and the rim is not really manageable as they will do next year with the new brakes that are not transferring the heat from the brake to the rim.

“The level of degradation is not really accessible because of the graining that in my opinion was masking a little bit the pure performance and degradation of the tyres. So, I would say this test was very useful for the teams, for us to have an indication for next year even if we have new cars as I said. We are going to produce as usual averages in terms of pressure, temperature, wear, wear profile that we will share also with Williams because Williams was not able to attend the test with the new car, but they will receive the data as well as the other teams, so we aren’t going to create a disadvantage for them.”

Isola: “We decided to keep the level of camber, the limitation of camber the same. We know that probably with the 18-inch tyres they require a little less camber. But because many teams were interested in the camberscan, we decided to keep the limits the same as the 13-inches. Pressure was dropped to 20psi front and 17.5psi rear. We didn’t change the rear pressure, so we had 17.5 starting pressure on Day 1 at the beginning of the session and also on Day 2. But on Day 1, the front was 21.5 and now dropped to 20. We know that with the new size of the 18-inches, the rear construction in terms of integrity is more robust and this is why we added the possibility to drop the pressure to 17.5psi at this point,low also compared to the 13-inches tyres.

Understeer a problem with these tyres –

Isola: “In general, yes, the only limitation as I said was due to the graining, obviously if you have graining on the front you start degrading that. But in general, talking for example for the two. Three compounds without graining they commented that they can push. Let’s take the C3 as a reference that is probably the more representative here. The level of grip is good, and they can push without having overheating or degradation or at least better than the 13-inch tyre. Honestly, I’m curious to see how the tyres perform on next year’s cars because I believe that they are different, also the level of downforce will be a big difference. So, we will need to understand how they work with the new aero package, probably I can imagine that they will add less downforce in low speed corners and more downforce in high-speed corners. So that is making a change in the balance of one lap, and this is impossible to test without the new cars.”

Easier to get temperature or difficult –

Isola: “I didn’t mention the fact that we are using the blanket temperature that we decided to use from 2022 that means the fronts are heated to 70c and not 100, and the rear tyres are heated at 70c and not 80. So from next year the maximum blanket temp will be 70 and 70. That is the same temperature that we have used during out tyre development this year so we wanted to use our representative condition. The comments from drivers were on the C1 in some cases the had to push quite a lot to get temp into the tyre, so that means a couple of laps to have the tyres ready, but we know that the C1 is not the tyre for Abu Dhabi. For the C2, it was a bit easier and for 3, 4, 5 they did not have any issue with the warm-up. During this year we tried to design the new compounds with a wider working range but without sacrificing too much in the warm-up phase because we knew that we wanted to go down with the temperature in the blankets so that is a confirmation of what we have found during the tyre tests.”

Different brakes, so temperature related to it –

Isola: “In general, and during the tests we have asked the teams to use maximum cooling for both front and rears because looking at the simulations next years with the flows that are going inside they shouldn’t be able to use the heat coming from the brakes to use the rim. There is a lot more space but also the brakes are designed with different flows. Now we are separating another characteristic of next years brakes because between the rim and the brakes you have space where you have air at a certain temp so depending on if you seal that or not you can have different temperature.

“But this year during the tire test we told them to use max cooling. I don’t exactly know what Ferrari did but believe that they were trying to use maximum cooling as they did during the test. The point was Day 1 starting from 21,5psi front but with a blanket temp that is much lower the pressure increase was quite high, so basically the running pressure was 4-5 PSI higher than the starting pressure. Today reducing the front was helping quite a lot. Next year with the new types of drums, new type of brakes they are in a much better position to control the heat that is going from the brakes to the tire and also the blanket temperature that is starting at 70.”