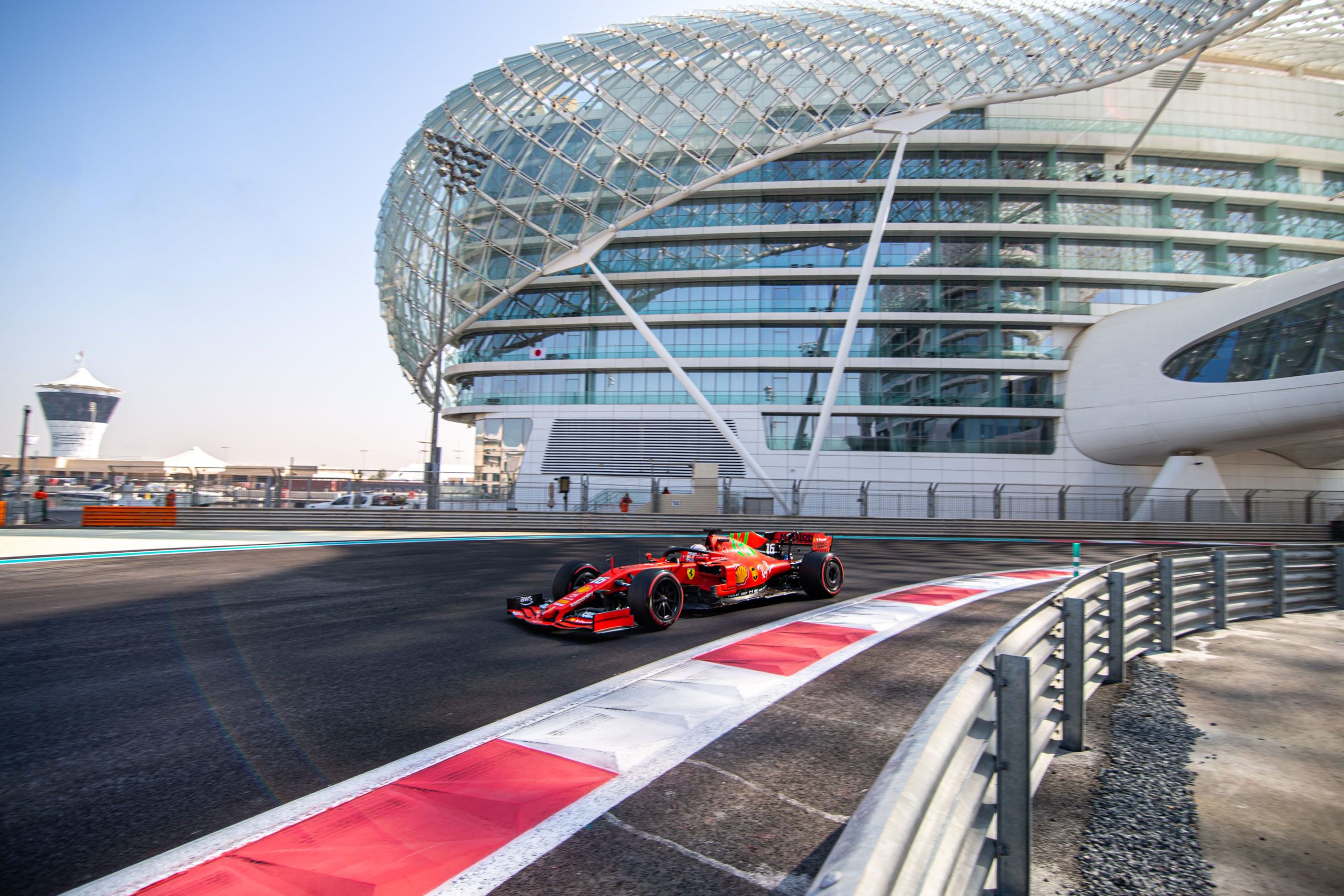 The two-day 18-inches F1 test along with young drivers’ provided a lot of data on the tyres and also the ones driving in Abu Dhabi as they reflect on the happenings.

Following the crazy F1 Abu Dhabi GP, teams and drivers stayed back for two days of 18-inches tyre testing at Yas Marina with only Nikita Mazepin and Lewis Hamilton on the missing list from the regulars, whereas rest all had their first go on the final product.

Among the firsts, George Russell got two days with his new team Mercedes, while Valtteri Bottas got a day with Alfa Romeo and Guanyu Zhou did two days – one in the current car as part of young drivers’ test and other in the mule car with the 18-inches tyres.

Having won the F1 title two days ago, Max Verstappen did take part in the test as Pietro Fittipaldi and Antonio Fuoco got a chance with Haas and Ferrari, respectively. The former did the 18-inches tyres testing while the latter did both tyres and young drivers’ running.

Among the other young runners were Patricio O’Ward with McLaren, Juri Vips at Red Bull, Liam Lawson at AlphaTauri, Logan Sargeant at Williams, Oscar Piastri with Alpine, Robert Shwartzman with Haas/Ferrari and Nyck de Vries at Mercedes, as Nick Yelloly drove for Aston Martin.

Here’s what some of the F1 drivers said about their running:

Russell: “It’s a strange feeling because I’ve tested with the team numerous times after races, end-of-season and now here we are again, but obviously it’s my first time as an official driver for the team. So it was a really great day to be back with the guys and learning about these new tyres. It’s obviously always a pleasant experience driving a World Championship-winning car, the 2019 Mercedes, and with these 18-inch Pirellis, which seemed to react pretty positively so yes – it was a nice day.”

Verstappen: “It felt good to be back behind the wheel and it was good to get a feel for the new tyres. Everything went smoothly and there were no major shocks around the tyres, which is always positive. Everything changes next year and the cars will be very different, so it’s good to have initial information about the tyres. It was a good day today at the end of a very long but ultimately massively rewarding season and now I’m very much looking forward to some time away from the racetrack.”

Perez: “It has been a really interesting day, the new tyres feel quite different from the current ones, in terms of how they behave and I have been nicely surprised by them. I know it is early days but generating temperature in them has been one of the things we have been working on and they seem to be more robust in terms of surface overheating. It has been enjoyable being out there today and at the moment I have a good feeling about these tyres.”

Vips: “I have been looking forward to this test for a while now, it is such a privilege to drive a Formula One car, even more so a Championship-winning one. It took my brain some time to get used to the speed of the RB16B because the pace is just crazy but then it is like any other car and you just get used to it and do your job. I had a small moment in the afternoon but fortunately everything was okay and I was back in the car soon after. I am super fortunate, first to be working with Red Bull Racing Honda but secondly to get the opportunity to drive this car.”

Leclerc: “It’s useful to continue to get an understanding of the new size of tyre, which is bigger than those we used to the end of this season,” he said. “The wheels are very big and the feeling through the wheel is quite different. The team has acquired plenty of data, which will be useful in preparing the 2022 car. Personally, today helped me learn more about these tyres, even though I doubt the feeling from this car will be the same as those from next year’s one, given that it will be conceptually very different.”

Sainz: “I’m happy with the number of laps we managed to do. I’m more tired mentally than physically, because by the end of the season, you’re super fit, but in your head, you have concentrate right to the end, because you are still driving a Formula 1 car. Being able to test these 18 inch tyres a lot was very interesting. There are obvious differences but I’d say that, overall, they are going in the right direction. From what I could feel today, I think it will call for a change to certain aspects of one’s driving style, but after all, we already knew we would have to do this with the cars we will get to drive next year being completely different to the ones we used up until last Sunday.”

Shwartzman: “We have now ended our 2021 Season. This one and a half days of testing have been really great. It was a pleasure to be with Scuderia Ferrari yesterday and enjoyed every minute of driving that car. Today I drove with Haas F1, new team for me, new car, new environment, new people with a full day of running. We did a good job, tested a lot of different things and ultimately were also pretty quick ending the day on top. Our race runs were very good and consistent, and I also tried pit stops for the first time in F1 which went very well. Overall, I’m very happy, I enjoyed driving the car and had a lot of fun. We did 130 laps today and 73 yesterday so overall more than 200 laps which is very good and a great experience. It’s now time to have a break and hopefully I’ll get more opportunities to drive an F1 car next year, to continue learning.”

Ricciardo: “It’s been a good day of testing to close out the 2021 season. Getting some track time on the 2022 tyre has been really useful. We’ve managed to learn a lot and gather a load of data, which is useful heading into next season. There’s still some bits we need to learn before we go racing next year but we’re in a good place.”

Norris: “Today was another productive day of testing. It was really good to get a feel for the new tyres and understand more about how they work. We’ve collected a lot of useful information over the last two days and this data will help us to work on things over the winter break and hopefully answer a few questions we had. There’s a lot of work to do ahead of next season, but I’m already excited. For now though, it’s important that everyone gets a well-deserved break after this long season.”

O’Ward: “Today was awesome! The car exceeded my expectations of what it’s capable of – it’s ridiculous how much grip there is, specifically in the fast corners – it’s unbelievable. For sure, in the morning, my head was still on my neck. But towards the end of the day, I really think what ended up limiting me being able to go quicker was just not being able to hold my head up and see fully where I was going. My head actually was just looking down because I couldn’t hold it up! It’s such an awesome car. What a great experience, I didn’t want the day to finish. I’d like to thank Zak, Andreas and everyone in the F1 team for supporting me through this incredible day.”

Lawson: “What an amazing day, it’s incredible how unbelievably fast these cars are. I’ve obviously driven in the simulator before and when I’m there I always think that there’s no way that the car can actually be that quick in real life, but it really is. I want to say a huge thank you to Red Bull, Dr Marko and everyone that has made it possible to be here driving for Scuderia AlphaTauri today. This has been something that I’ve been dreaming about since I was a kid so it’s just incredible and I’m really, really happy. I was definitely nervous pulling out of the garage for the first time, I tried not to show it, but I definitely felt it. It took me a little while to get to full throttle but when I did I thought ‘holy moly that’s a lot of power!’ The biggest difference is just the downforce, there’s significantly more than anything I’m used to. We worked on a lot of different things in the run plan today, both short and long runs with different tyres and one thing that was really cool and new to me was the live data. The ability to have the team update me as I’m out on track was really interesting, although you couldn’t make a mistake without them knowing! Getting feedback from Yuki too was also really great, we’ve been teammates before, so it was good to get his understandings and learnings and it was nice to be back driving with him again. I really didn’t want to get out of the car today, it’s been amazing to get my first taste of F1.”

Yelloly: “It was great to get through all we needed over the day, and yes, I have a bit of a sore neck now! Really good correlation runs between the car and the sim and test items for the ‘22 car with all the rule changes, so all-in-all, a very good day.”

Sargeant: “What an incredible first day in a Formula One car; it was everything I expected and more. I want to start by saying a massive thank you to Williams, as that was the experience of a lifetime. The team did a great job preparing me for today and giving me the confidence to go out there, enjoy it and do the best I could. We got through the run plan and I really progressed a lot throughout the test. The first couple of runs felt unbelievable with the amount of grip and power the car has, but I got used to it fairly quickly and felt comfortable by the end of the day. It’s definitely a massive step up from the FIA Formula 2 and FIA Formula 3 cars; the brake performance is much better and there’s a lot more downforce. The stopping power was like nothing I’ve felt before! The more you drive, the more you learn and the more pace you find, so I was happy with the lap times I was putting in by the time we finished today.”

Alonso: “This January I will have to remove the plates from my face so I will have two weeks in January off but probably I had those off anyway even without the surgery because it’s just time to relax. But after that we need to go into winter testing with a good programme, physically and also in the car. And if the car is competitive, I’m sure I will be 100%.”

Here’s how Day 1 of F1 test panned out

Here’s how Day 2 of F1 test panned out