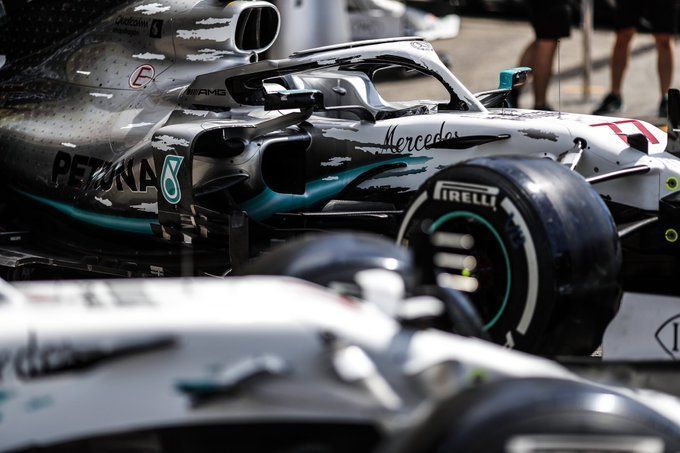 Mercedes has officially revealed their special livery for F1 German GP, which is to celebrate its 125 years in motorsport.

Ahead of the grand weekend at Hockenheim, Mercedes started to tease a special F1 livery for this weekend’s German GP – of which they are the title sponsors – where they are to celebrate 125 years in Motorsport and also have their 200th start in F1.

Toto Wolff confirmed a ‘commemorative’ livery and as days went by, they started sharing photos of the car one by one. The German manufacturer already released a fresh logo for the weekend, which could be spotted on the nose of the car.

Without giving away much, it could be ascertained that the livery will have a mix of white and black and by the time they started working on the car at the circuit, it was revealed that only the front end will have the change in colour as opposed to the full car.

As revealed ahead of the pre-weekend FIA checks, Mercedes showcased the one-off scheme, with the front-end dipped in the white colour and the back-end of the car remaining the usual silver and black, with the stars staying as it is.

The team though used the livery in a canvas painting manner where they left out the edges of the white colour mixing with the usual livery. The driver numbers is painted red as well, for better vision for the fans in the stands and watching on TV.

The team heads into its home grand prix at a commanding position, leading both the constructors’ and the drivers’ championships at ease – where the latter is pretty much between Lewis Hamilton and Valtteri Bottas, at the moment with 10 races done.

Abd this is the @MercedesAMGF1 front wing for Hockenheim! Do you like it? pic.twitter.com/RDABwlEACT