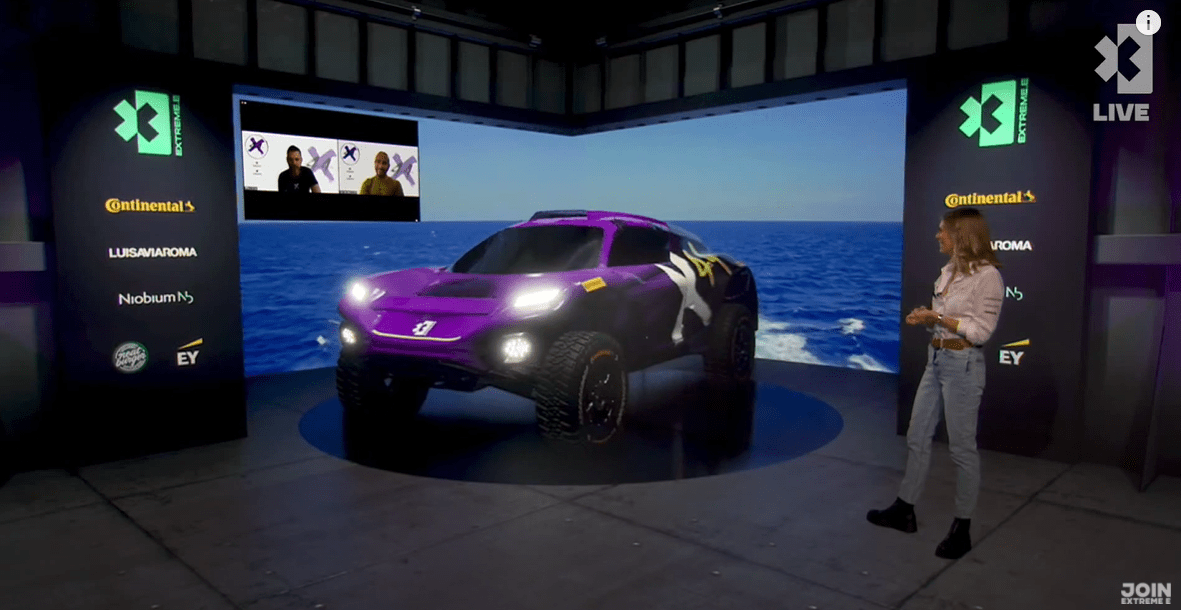 The upcoming Extreme E series undertook a virtual launch with liveries revealed of all the teams along with full calendar for the 2021 season.

Extreme E had an official launch event Tuesday, albeit virtual, with liveries of all teams that will contest the new-for-2021 electric series being displayed being revealed, and details of the championship, disclosed.

With Nicki Shields there to introduce each Extreme E teams’ livery, rendered onto an AR version of their Odyssey 21, Lewis Hamilton’s X44 team were the first to present, showcasing a predominantly purple livery with their bold logo emblazoned on the side.

Abt Cupra unveiled their livery shortly thereafter, it featuring a largely gray color scheme with gold and lighter-gray accents. The team also had their driver, Mattias Ekstrom play a part in their presentation. A female driver, required in the line-up by the Extreme E regulations, was not present.

It's unconventional but we LOVE IT. Presenting @ABT_Sportsline 2021 look!

It's time for a new adventure – together with @cupra and @mattiasekstroem we're taking on perhaps the most spectacular challenge in international motorsport: @ExtremeELive 2021⁠ pic.twitter.com/AJLctzkKcN

Related to Veloce Esports, Veloce Racing were the third Extreme E team to reveal their livery, which includes a neon green undertray, with similarly colored accents contrasting a blackish gray base layer. The accents were appreciated by many as an attractive design element.

Andretti United Autosport – a team with which McLaren boss Zak Brown has ties – later released their Extreme E car’s livery, which shares similar colors to the American flag, the US being the home base of this particular operation. After, Techeetah – expanding their involvement in electric racing after involvement in Formula E – showed off their livery.

How good does the @AndrettiUnited livery look?!

The American Chip Ganassi Racing team, immediately off the back of their IndyCar title win with Scott Dixon, were the next to reveal their livery, also announcing a driver line-up comprised of Sara Price, and Kyle LeDuc, both coming from off-road truck racing.

A new look for @CGRTeams and it is EPIC!

What does everyone think?? 🔥

A competitor in open-wheel racing categories, HWA were the seventh Extreme E team to present, with a livery reminiscent of those used by the team and its parent company Mercedes across motorsport. It features a grayish-silver base color, with turquoise also present. With a similar livery in many respects, QEV Technologies displayed their car shortly after.

We are hyped to see this one on track, @QEV_Tech!

The final team to do so, Rosberg Xtreme Racing presented their car at the bottom of the show, with an undeniably striking livery. A glossy black base is overlaid by turquoise coloring on this car as well.

The series will be nothing else we have ever seen. Not only will the different terrains be unique for any international motorsport series, but the cars will too 🙌 #RXR #ExtremeE #XEGlobalLaunch pic.twitter.com/86dhPffTjr

And just like that, we have a full grid of cars in 2021 liveries! pic.twitter.com/j1IZCdy14O

More details of the six-race Extreme E schedule were also revealed, the season beginning on the 20th-21st of March in Saudi Arabia in Al Ula, dubbed as Desert X Prix. In Senegal in Lac Rose will be the second round, Ocean X Prix, taking place from the 29th to the 30th of May.

Greenland’s Kangerlussusaq August 28th-29th round will mark the halfway point of the season with Arctic X Prix, before the circus carries on in Brazil’s Para across the 23rd and 24th of October with Amazon X Prix. The season will end with Glacier X Prix in Argentina’s Patagonia, which replaces Nepal’s Himalayan round, on the 11th and 12th of December.

“Our Virtual Launch has been an incredible format to unveil our Season 1 calendar and the team cars, whilst also refining our virtual experience capabilities – a key theme of Extreme E – particularly during the time of COVID-19,” said Alejandro Agag.

“Our team has been working really hard behind the scenes and despite the pandemic and the challenges it has provided, we are on track for our first race in March 2021. The series has gained massive momentum with no less than two Formula One World Champions signing up with their own teams alongside other powerhouses in the motorsport world, and there is much more to come as we announce drivers in the coming months.”

Aside the Extreme E news, the day also saw Audi confirming its 2021 Formula E line-up with Lucas di Grassi continuing for another year as Rene Rast was confirmed to be his teammate, with the DTM champion securing a full-time seat.