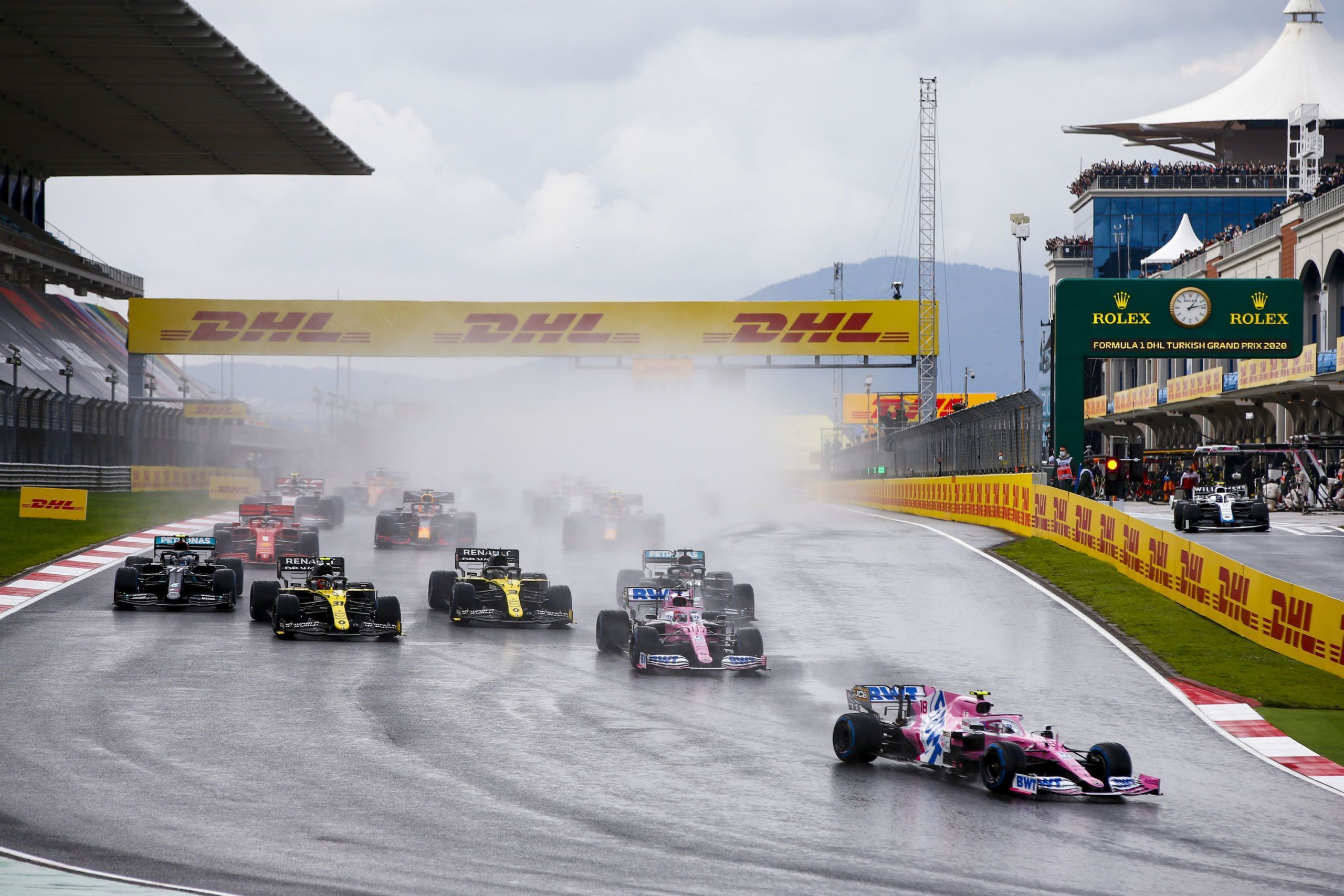 Sergio Perez says he was informed of the struggles faced by Lance Stroll on the second set of intermediate which is why they did not pit in F1 Turkish GP.

The decision to not pit the second time in Turkish GP at Istanbul Park was eventually a hit for Racing Point’s Perez, as he managed to fend off the challenge laid down by the Ferrari duo to take second and register his first podium since the 2018 Azerbaijan GP.

He almost lost it to Charles Leclerc but the Monegasque made a mistake, which allowed Perez to remain second despite the push from Sebastian Vettel. For the Mexican, not pitting the second time was decisive in the end, especially seeing the troubles faced by Stroll.

While Mercedes’ Lewis Hamilton managed to pull away, Perez was caught by his rivals but just managed to hang on in the end. The Mexican noted on radio, though, about ‘one more lap and his tyres would have exploded’, as his engineers were relieved with the podium.

Speaking post-race, Perez revealed that discussions about him pitting was on but with Stroll struggling, they decided otherwise. “I think at the time, especially when everyone was stopping it would have made sense, early on,” he said.

“I got the feedback that he – my teammate – grained the tyres straightaway, so the team decided to keep me out a bit longer and then we, as the race panned out, we basically carried on with that set to the end. At that point it was all about surviving on those inters.

“We were a bit stuck. We were expecting some more rain towards the end of the race and at the same time we were suffering quite a bit with the inters. We were going through the graining phase and I was able to control it after that.

“When Stroll pitted, I was also thinking of the idea of trying another set because my set was pretty worn out but as I said, the team informed me that he grained straight away and the pace was not coming so we decided to stay out.

“But in hindsight, probably, even how much we suffered in the final laps, we probably could have pitted for another set,” summed up Perez, as the Mexican ruled out talks of team orders when they were leading, as for them third in the standings was more important.

“We are in a very fight for third in the Constructors and that’s really what matters to us, so it was all about getting both cars as high as possible,” said Perez. “I think the lead car at the time was Lance and at that time, we thought the best was to stop and that didn’t work out for him but in the end we managed to score good points.

“We outscored our competition and there’s still three very important races for us in the championship,” summed up Perez, as Racing Point is back in third with 154 points to McLaren, who has 149 to Renault’s 136 and Ferrari’s 130.

Meanwhile, on Stroll’s side, the Canadian was a bit confused with lack of pace on the second set of intermediate. It not only affected him but also several others who pitted after the Ferrari duo, who seems to have perfected their stop in the desired window.

“It was a terrible day,” said Stroll to TV media. “I was not surprised to pit because my tyres were in such bad shape, and I felt that we kind of had to pit at that stage. Maybe I would have gone past the graining and took it to the end of the race.

“But at time, it was so bad that it was kind of the right thing to do but the next set grained again and we went further back. It’s really hard to understand what happened and we need to go away and figure it out. I made a good start from pole position.

“I was able to build up a lead of over 10 seconds in the first stint, which gave us a real platform for the second stint to get a great result. Throughout the race, I was struggling with graining on the intermediate tyre,” summed up Stroll, who had his first points finish in seven races.

UPDATE: Post writing the story, Racing Point found the issue with Stroll in Turkey, where they noted that they found a damage to the underside of his front-wing.

“During the team’s routine post-race car set down, we discovered damage to the underside of Stroll’s front wing that was a significant contributor to the graining issues he experienced during his 2nd and 3rd stints on the intermediate tyres at the Turkish GP.

“Lance reported poor tyre performance, significant understeer and graining from lap 17 onwards in the race. Pitting for a fresh set of intermediates on lap 36 failed to resolve the problem, with the graining becoming even more severe.

“Data during the race confirmed there was a significant loss of front downforce – but with no visible damage to the top side of the front wing, combined with the low-grip conditions, it was difficult to confirm whether the data was correct.

“It was only after the race, when the car returned to the garage, that the damage and blockage to the underside of the front wing was discovered,” summed up the statement from Racing Point.

Here’s the video of the spin from Max Verstappen behind Sergio Perez: https://www.formula1.com/en/video/2020/11/2020_Turkish_Grand_Prix__Spectacular_spin_for_Verstappen_as_he_battles_Perez_for_P2.html