Lando Norris is respectful of the message from Lewis Hamilton in F1 Austrian GP, as he notes he learnt a lot from driving against them in such situation.

It was not just heart warming when the radio was played in F1 Austrian GP, the post-race reaction from McLaren’s Norris was equally melting, whether it was when speaking to media and or on social media, especially on Instagram.

After Mercedes’ Hamilton finally made it past Norris after laps of struggle, the seven-time F1 champion was quick on the radio to comment ‘such a great driver, Lando’. Having finished third, the McLaren driver was told about the radio message after the race.

Norris – in his usual shy and blushing demeanor – accepted the comment and even said ‘love you, Lewis’ on Sky Sports post-show. In seriousness, the Brit was more happy with his and the team’s performance overall, where he got to fight with faster cars.

Both Mercedes and Red Bull remain quicker at the moment, but McLaren seemed to have good pace, especially at Red Bull Ring at the hands of Norris. The Brit enjoyed his battle with Hamilton and also chasing Valtteri Bottas for second, towards the end.

“I don’t know what to say, but thank you” said Norris. “I mean it was tough, it wasn’t easy like the whole if the first stint I think both Mercs were quicker than me which was not a surprise, something I was expecting but to hold them off as well as we did was a little bit of a surprise and for that long into the race.

“But it was like it was the first time I’ve really raced against him and you get to learn how he drives and how he races as well as learning from Valtteri and how he approaches things and when there are risks taken and things like that. Like, as much as I appreciate the kind words it’s not like he was driving perfectly.

“There were still times he ran wide out of Turn 1 or made a mistake in Turn 3. It’s not like they’re not raceable; you kind of get there and when you have the car to perform and do well, you realise you have a chance against them. It’s hard to ever say that until you’re actually racing against them and your car’s there and you’re going head-to-head.

“Normally, they’re way too far ahead of me so… It was cool, it’s a good feeling to race against not just Lewis but Valtteri as well and Max and Sergio, to be in that pack and say we’re fighting for a podium because our pace is just that good, was a really good feeling,” summed Norris, who later posted a kind message for Hamilton.

Norris stated ‘respect for the words, hopefully, many more battles to come’, which Hamilton acknowledged straightaway. The Mercedes driver is in a peculiar position, fighting against a youngster like Verstappen for the F1 title, while also has the likes of Norris, Charles Leclerc, Carlos Sainz around him, with George Russell waiting for his midfield chance. 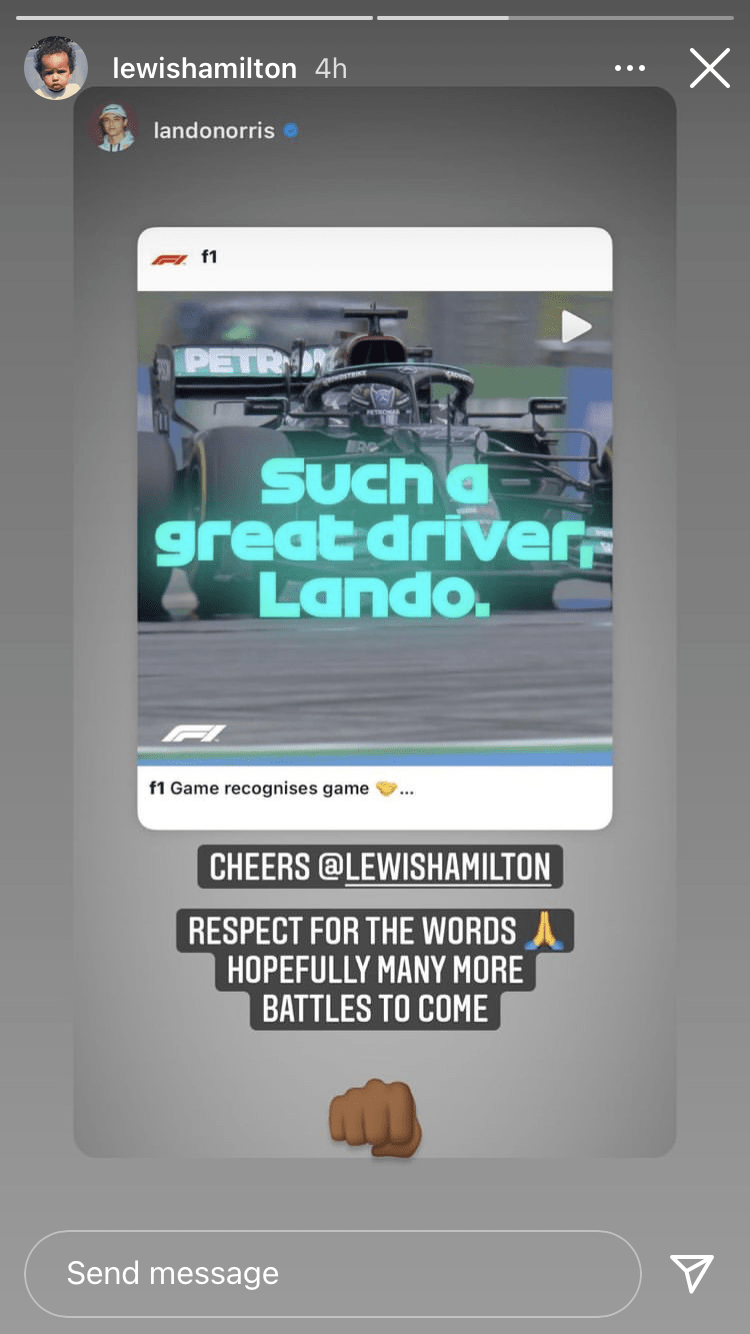 Here’s McLaren on taking on Mercedes for P2