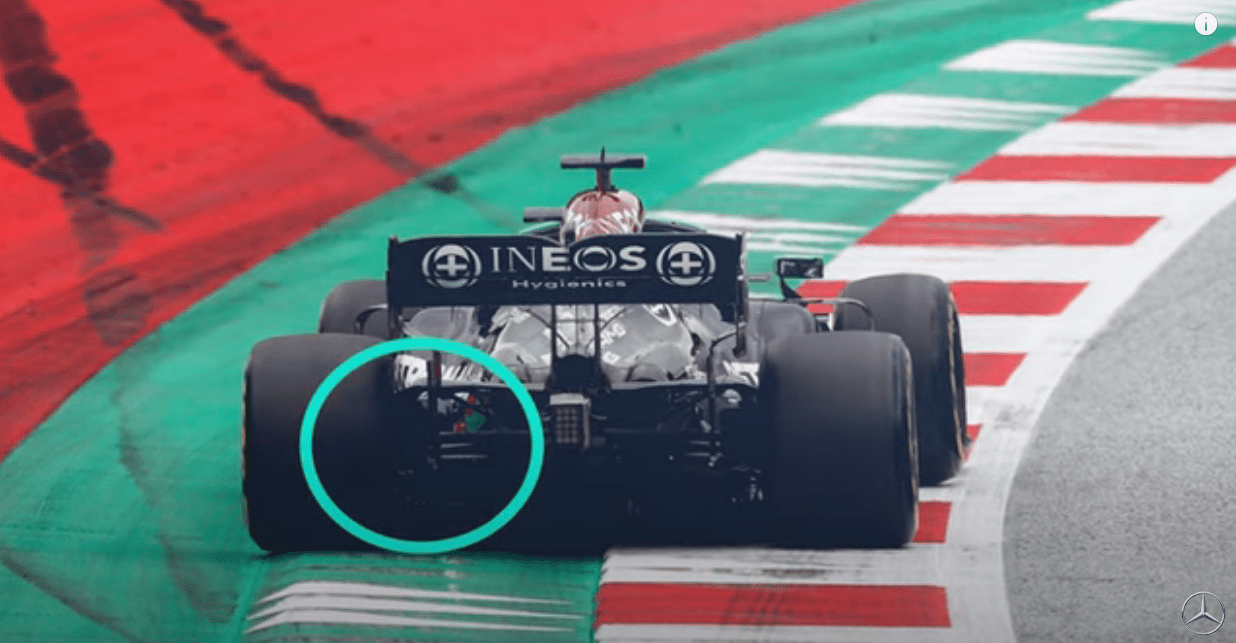 Andrew Shovlin shares further details of the damage to Lewis Hamilton’s Mercedes car in F1 Austrian GP, plus adds on the swap decision and his struggles to overtake Lando Norris.

Just after the end of F1 Austrian GP, Toto Wolff talked about Hamilton losing 30 downforce points, after damaging his car at Turn 10. Shovlin has further shared the parts where the damage was on his car in their usual post-race debrief video.

Shovlin revealed that Hamilton suffered damage to its winglets that sit on the rear uprights after going over the kerbs. He notes that it a very sensitive area and it played a key role in determining their eventual decision to swap, where Norris could have troubled both.

The idea to have Valtteri Bottas defend second was beneficial from team side, as Hamilton was destined to lose third to Norris. “The bit that got damaged is some of the winglets that sit on the rear uprights, so the carbon work there, it’s quite intricate aerodynamic parts that generate an awful lot of the performance on the Mercedes car actually, it is a very sensitive area and we are measuring the pressures in those areas and from that, we can calculate the performance,” explained Shovlin.

“Now, the estimates that are coming in were around 30 to 40 points of downforce. That translates to around six or seven tenths of a second per lap, so quite a substantial amount. But even worse here, it all came off the rear axle so Lewis had a lot of oversteer on that stint, the backend of the car is sliding around, it’s heating the tyres and wearing the tyres and that problem starts to compound itself with higher rates of degradation so ultimately it cost Lewis the P2 position, it also meant that we decided to stop for another set of tyres just to make sure he could get to the end.

“As for the swap situation, initially once we diagnosed the performance problem on Lewis’s car, we were just seeing where his lap times actually stabilised but it came clear pretty early on that he was going to find it impossible to defend against Lando Norris behind. We were worried that Valtteri in the middle of that battle was going to ultimately be vulnerable.

“But what we were waiting for was just for Lando to actually get close enough where he was a risk to Valtteri and that was what triggered our decision to invert the order. So, you saw Lewis let Valtteri get by, and then ultimately Lando was able to overtake Lewis, but as I said, once we understood the extent of the damage, we concluded pretty early on that hanging on to that third place was going to be effectively impossible,” summed up Shovlin.

In fact, Norris was not posing trouble at the end of the race for Mercedes, he did so at the start too, where Hamilton was stuck behind him for long, allowing Max Verstappen to pull through. Even without the Brit, it would have been difficult to fight for a win, but the idea was to at least keep the pressure on Red Bull.

Talking about why it was difficult for Hamilton to pass Norris, Shovlin out it down the different to be too low for them to pounce on the McLaren. The dirty air didn’t make it easier either. Fundamentally it’s because Lando was quite quick and we didn’t have a very big performance advantage,” he said. “Also, you have got to sit very close, you are around one second behind, you have less downforce, the car is sliding around and the tyres get hotter and you lose grip.

“So it took Lewis most of that stint, once he did get by, you saw that he was able to pull a bit of a gap. He also commented about how Lando was driving so well what he meant there was simply that Lando wasn’t making any mistakes, because when they are behind another driver, what they are really looking for is that driver to lock a wheel or get a snap of oversteer on exit that just holds them back enough so that they can actually make the move but unfortunately for Lewis through that stint Lando drove pretty much perfectly,” summed up Shovlin.

Here’s McLaren on taking on Mercedes for P2