Home F1 Niki Lauda laid to rest after his funeral at St. Stephen’s in... 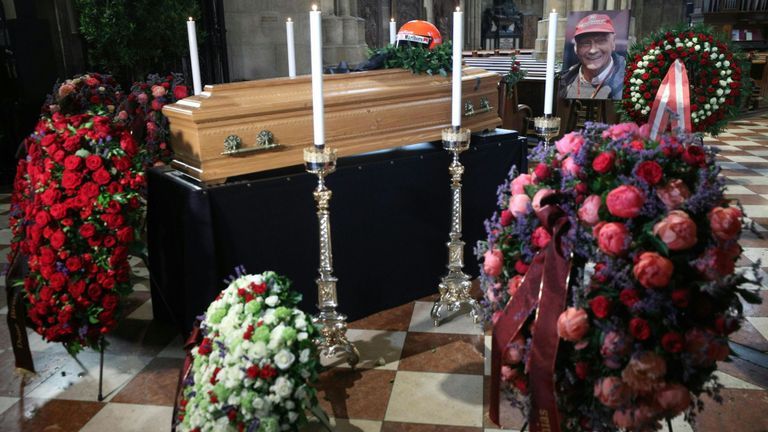 Three-time F1 champion Niki Lauda funeral took place in Vienna on Wednesday, which was attended by fans and many eminent personalities.

Following Lauda’s death on May 20, the Austrian was finally laid to rest on May 29 after the funeral service at St. Stephen’s Cathedral in Vienna, Austria. The coffin was carried into the church at 8 AM local time with wife Birgit and son Mathias at his side.

His racing helmet was put above the coffin as the cathedral was open for public to pay their last rites to Lauda until 11:30 AM. The turnout was huge as the fans gathered around despite it being a rainy day but many couldn’t get a chance to get inside.

Once the public service was over, priest Toni Faber started the private ceremony from 13:00 local time which was attended by several key personnel of Austria including politicians like president Alexander Van der Bellen and mayor Michael Ludwig.

Lauda’s wife entered the cathedral along with her children and Mercedes’ F1 boss Toto Wolff, his wife Susie and Lewis Hamilton. Ex-champ Nico Rosberg entered along with actor Daniel Bruhl, while Valtteri Bottas came in with his wife Emilia.

The service held by Faber was done privately with Austria’s OE24 stating that he opened the requiem ceremony with home priest Hubert Ritt also present at his side. From the F1 side, former teammate and close friend Prost recited a phrase from Bible’s Old Testament.

Lauda’s younger children Max and Mia performed the intersessions after which the band played ‘Fast Car’, ‘Save Us All’ by Tracy Chapman and also songs of John Lennon. There were speeches from Van der Bellen, Schwarzenegger and Berger.

With the end of the requiem, Mathias led the way as the bearers brought the coffin out of the cathedral with Hamilton, Bottas, Prost, Piquet Sr, Berger, Marko, Rosberg and Alesi at the side. The coffin was then taken away to the burial site for a private ceremony.

VIDEO: F1 legend Niki Lauda's coffin is carried inside Stephen's Cathedral in Vienna, ahead of a public mass and a private funeral. The sports legend died on May 20 at the age of 70 pic.twitter.com/z4FxLwDWOo

Niki will always be remembered as an @F1 icon and as the Chairman of our team.

But we’ll also remember Niki Lauda the man. This is the story of our Niki. Our team-mate. Our dear friend.

The Austrian Press Agency has a gallery dedicated to Niki Lauda, you can see it here.

From everyone at FormulaRapida.net, condolences to his family and friends, Danke Niki!

Hamilton opens up on Niki Lauda, credits his push to be five-time champ

Brawn relays legacy of Niki Lauda and his impact in F1