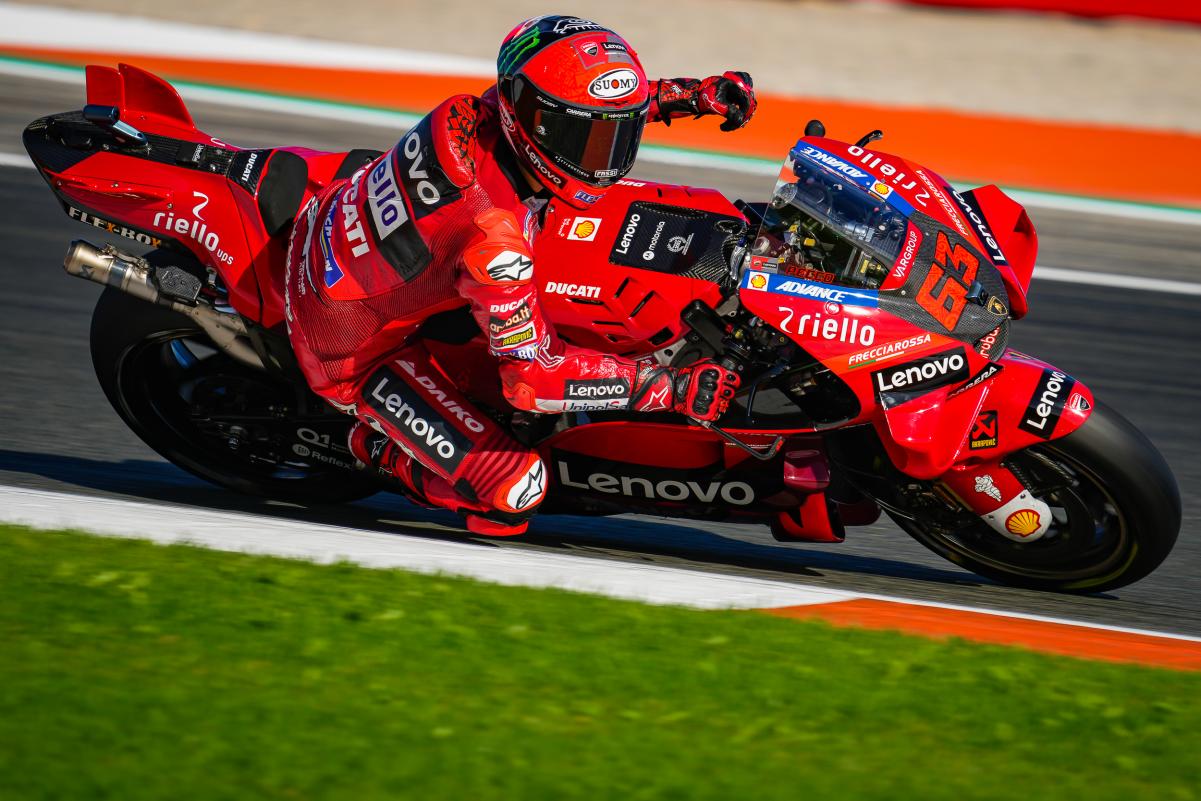 It was a hectic start to MotoGP finale in Valencia GP as title contenders Fabio Quartararo and Francesco Bagnaia went wheel-to-wheel for multiple laps for track position on their Yamaha and Ducati machines. They even touched where the latter lost a winglet.

The two gave it all but Quartararo had the last laugh to stay ahead even though he wasn’t still winning the MotoGP title then. At the front, Suzuki’s Alex Rins led the Valencia GP after a strong start with pole-sitter Jorge Martin in second in his Pramac Ducati.

Honda’s Marc Marquez was third for the starting few laps but Ducati’s Jack Miller took third from him after shedding off both Quartararo and Bagnaia. The Australian at one point fell behind the two but he got back up on pace in the fight for the podium places.

Marquez was fourth from Quartararo who fended off KTM’s Brad Binder for couple of laps. The South African was sixth after passing Bagnaia, who dropped to seventh. Suzuki’s Joan Mir was eighth from KTM’s Miguel Oliviera and VR46 Ducati’s Luca Marini in the Top 10.

Oliveira passed Marini early on after Aprilia’s Maverick Vinales dropped back. His teammate Aleix Espargaro retired due to a mechanical issue as the grand prix saw five crashes in a span of few laps with six retirements in the first part itself.

Honda’s Pol Espargaro was first to crash followed by RNF Yamaha’s Darryn Binder with LCR Honda’s Alex Marquez next, RNF’s Cal Crutchlow then and finally Honda’s Marquez from third. Only one Honda and two Yamaha bikes were running in the grand prix then.

With Rins leading from Martin and Miller, Quartararo was fourth from Binder as Bagnaia came under fire from Mir soon. Oliveira was eighth from Marini as Gresini Ducati’s Enea Bastianini was 10th where the Italian firm to secure third if he finishes the race.

As the Top 3 led the way, Binder started to close in on Quartararo and eventually passed him for fourth as Oliveira cleared Bagnaia for seventh behind. Marini closed in on the MotoGP title contender with Bastianini in the Top 10.

Bagnaia lost to Marini and Bastianini to be 10th as a transponder issue for Mir didn’t show him in sixth where he was running. Vinales was another to retire due to a mechanical issue, as at the front the fight was on for second position.

Martin held on to second but Binder passed Miller for third in his chase to register a win. The Australian crashed out in his last race for Ducati promoting Quartararo to fourth. Mir was fifth from Oliveira, Bastianini, Bagnaia and Yamaha’s Franco Morbidelli in the Top 10.

At the front, Rins held onto the lead to win Valencia GP in the last race for Suzuki in MotoGP as Binder was up to second after passing Martin to complete the podium. Quartararo was fourth as he lost the title to Bagnaia.

The Italian came back from being down by nearly 100 points to eventually win his first MotoGP title and he first Italian to win the championship since Valentino Rossi did so in 2009. Ducati also completed the set of three titles in 2022.

With Quartararo in fourth, Oliveira passed Mir for fifth as Marini was seventh, Bastianini eighth, Bagnaia ninth and Morbidelli in the Top 10. VR6’s Marco Bezzecchi was 11th in points from Tech 3 KTM pair of Raul Fernandez & Remy Gardner.

The Top 15 points position was rounded out by Gresini’s Fabio di Giannantonio and LCR’s Takaaki Nakagami, with Crutchlow and A Marquez re-joining the race in 16th and 17th.

This is the outcome of #TheDecider 👇@Rins42 dominates at Valencia as P9 is enough for @peccobagnaia to clinch the title! 🔝#PerfectComb1nation 🏆 pic.twitter.com/R5QcOXyDYy